RIVER POLLUTION
Blue river blues
The discolouring of the Lukha river has also meant a loss of livelihood to the families who live on its banks. They must now subsist on meagre farming, and wage labour when it is available. Sonata Dkhar reports.

"Of course I am angry, I am sad. Why wouldn't I be? The loss has been so much for all of us", says an irate Kynmaw. She is one of the many residents of Shymplong village, which is situated on the banks of the river Lukha, who share the same sentiments of loss, anger, disappointment and desolation.

Kynmaw and her husband were both engaged in fishing and earned their livelihood from the Lukha river. Today she stays at home, while her husband is either engaged in tending to the areca nut plantations, or works as a daily wage labourer whenever he is able to find some work. Their plight is shared widely; for all those living on the banks of the river, life has changed. Fishing has come to a halt, and the fishermen no longer seem to exist. "Earlier we just had to step into the shallow waters and the small fish would come all around you" says Kynmaw, remembering a time she and many others have been compelled to let go.

The Lukha river, which originates from the Nongkhlieh Elaka and flows along the Narpoh reserve forest of Jaintia Hills, Meghalaya, is one of the main rivers that run through the district and drains itself into the Surma valley in Bangladesh. In January of 2007, the colour of the river changed noticeably blue, and a big transformation swiftly followed. "The colour started changing first, and then simultaneously all the fish started dying. There was a foul smell lingering in the air for days, and thousands of dead fish were pushed to the banks", describes Bah J Lamare, the headman of Sonapur village, recollecting the event that shocked the locals.

Even though the monsoons of that year brought back the characteristic murky brown colour of the river, December 2007 saw a resurgence of the fear in the minds of the locals, as once again the river turned blue. "There has been a loss in our livelihood, in our way of life and in fact in our culture as well", says Bah Lamare. The river which attracted hundreds of fishermen from all over the hills and neighbouring states now has empty banks. The various fishing competitions have stopped, and as Bah Lamare puts it "... a river which never allowed people to return empty-handed is now devoid of its own life."

The Lukha, once known for several varieties of fish, today has no traces of aquatic life. Ironically the name 'Lukha' literally means 'reservoir of fish' in the local Pnar language, as it is considered to be derived from the words Tluh meaning reservoir and Dokha meaning fish. 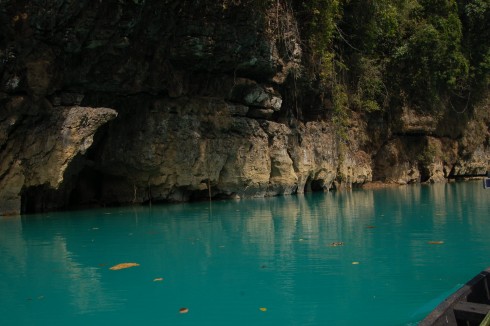 The Lukha, once known for several varieties of fish, today has no traces of aquatic life.

•  180 crores to bury a river
•  Mining away the Bharathpuzha

The loss of fish has meant the loss of livelihood. "We used to get 25-30 kgs of fish everyday, but now what can I do?" asks a melancholic yet angered Wanbha Rymbai, an unemployed fishermen of Sonapur village. Many people living on the banks are unemployed like Wanbha. Some occupy themselves with the little cultivation they can carry on in the steep hills, while most others try to find work as labourers. But having their main means of income taken away from them has left most of the people struggling to make ends meet.

In 2007-8, the Meghalaya Pollution Control Board released an "Investigation Report on the contamination of the Lukha river". The report stated that the river was polluted and had turned blue because of its tributary the river Lunar. The excessive acidity present in the Lunar, the catchment area of which lies in the coal mining region, reacted with the limestone and resulted in the 'blue river'. It also explained that shortage of rainfall in the catchment area of the Lukha, as a contributing factor, since the Lukha's clean waters are unable to meet at the confluence of the rivers in the winter months.

But Wanbha doesn't agree, and is quick to point out who he thinks the culprits are, who have rendered him jobless and with no means to earn a livelihood. "We have to blame the cement companies. It is after they started functioning that this has happened to us. The coal mines have been there even before that", he says. His is one of the many voices of resentment towards the cement plants.

The Jaintia Hills district is one of the major coal mining areas of Meghalaya, and has several cement plants functioning in the district. Excessive and unregulated mining has left extensive scars on the land and caused extreme environmental changes. Like the Lukha, several rivers and streams in the coal mining belt have no traces of aquatic life. The river beds are lined with what is called AMD or Acid Mine Drainage which results from the high sulphur content of the coal in Jaintia Hills, giving many rivers in the coal belt a characteristic yellowish red colour. Other rivers like the River Kwai are showing signs of turning blue just like the Lukha.

The blue water has also meant a serious scarcity of water in the region. Most of the villages on the banks were dependent on the Lukha for drinking, cooking, washing and various other purposes, since almost all the villages have insufficient water supply. Even the Public Health Engineering Department's tanks and water connections (which are new to some villages like Lum Tongseng) are at most times dry, especially in the winter months.

"We used to drink the water, used it for bathing, washing clothes, cooking , but now I don't even use it to wash my clothes, because they harden and have a peculiar smell when they dry" says Kynmaw whose village still has a little water supply from the springs around the village. But things are different for a choice less Bliss Talang, a resident of Lum Tongseng village. "I still use the water of the river even though I know it's dirty. At times I even have to drink it because there is no other water."

The contamination of the river has been a loss that the people of the villages on its banks is only bound to get worse, with the decrease in rainfall in the region. According to the Indian Meteorological Department, there has been a 29 per cent deficit of rainfall in the North East during the monsoon period of 1 June to 18 August 2010, with Meghalaya being the worst hit, suffering a 50 per cent deficit. And if the report by the Meghalaya Polluttion Control Board is what we can go by, then shortage of rainfall will only spell more disaster for many of the local Jaintia people.

In the past three years the condition of the Lukha has never become better as some of the villagers had hoped for; in fact some of the clean small springs that flowed into the Lukha from the Narpoh range have become non-existent. As Wanbha looks on at the turbid waters he once swam and played in as a child, he knows that with the increasing number of cement plants and excessive mining and quarrying, along with "no help from either the government or voluntary organisations", things will only get worse for him and all the others.

Sonata Dkhar
Sonata Dkhar is an independent film-maker, based in Shillong. She received the Panos Fellowship on Climate Change Reporting for 2009-10.

URL for this article
http://indiatogether.org/lukha-environment