Recent incidents, where sex workers were detained by the police and subsequently forced into a state shelter for beggars, are symptomatic of the continuous harassment faced by them and a basic lack of understanding of their realities. Pushpa Achanta elaborates.

On 6 March 2015, around 28 women and two transgender sex workers in Bangalore were arrested from their homes, neighbourhoods and public places by the local police and sent to the Beggars' Home in Bangalore for supposedly creating a 'public nuisance.'

In such circumstances, the persons under detention are unable to inform their families or friends about their location as their personal mobile phones are seized and they have no access to other modes of communication although they must be permitted to make one phone call, at least. Given the above instances of unanticipated and unacceptable action by the police, human rights activists have expressed their written and oral objections to such harassment on both the occasions. 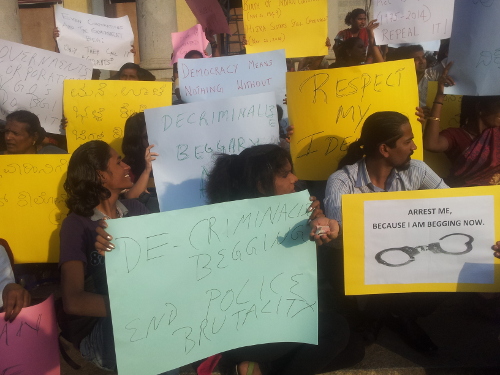 Sex workers and their allies protesting the December 2014 arrest of the sex workers by the police in Bangalore. Pic: Pushpa Achanta

During the December episode, the police agreed to release the sex workers after organisations and individuals campaigning for the rights of sex workers gave a written assurance on behalf of the latter, stating that they would not enter into any arguments with the police. However, the police gave no assurance about not repeating their actions.

Following the repeat instance in March, gender rights activists and writers met the Assistant Commissioner of Police (ACP) at Upparapet Police Station in central Bangalore to appeal for the release of the sex workers. The evasive officer tried to blame the sex workers for their plight but did not agree to free the detainees. Soon after, the women met the Assistant Commissioner (Administration, North Bangalore) and highlighted the fact that the detained sex workers had small children at home, which made him reluctantly order their release.

Both the officers who were disgruntled remarked, “Women’s rights activists always talk in favour of sex workers and press for their freedom and rights but are unavailable at other times for dialogue on how sex workers can co-operate with the police to ensure their peaceful existence!” When they were told that the allegation was untrue and were asked for evidence of an invitation to a discussion, none of them had an answer, making it clear that neither the police nor the administration had made any such attempt as they claimed.

Activists and allies of sex workers also raised very pertinent questions before the ACP, seeking clarifications on whom the police referred to as the “public” while pressing charges of public nuisance, and if there was any record of their complaint.

It is important to note here that some of the sex workers were actually taken from their homes or off the street when they were out doing personal chores, and not while soliciting clients. In fact, due to such repressive actions and harassment by the police, sex workers rarely solicit in public spaces now and are contacted directly by their clients.

“My mother is the only other person in our small and poor household. Ever since I met with an accident and lost the use of my right hand, I have become more dependent on her. She does not engage in sex work anymore, but a few people are aware that she was a sex worker. When she did not return from the grocery store nearby, where she had gone to buy some food grains for a few hours, I managed to contact one of her friends. That lady told me that my mother had been arrested by the police. I have not been able to eat or sleep since then”, says Anuradha, a young woman aged around 19, in tears.

Apart from the social stigma attached to sex work due to exaggerated notions of morality and widespread social discrimination against transgenders and other sexual and gender minorities, there are several legislations that further isolate them and affect their basic existence. One such law is laid down by Section 36A of the Karnataka Traffic Police Act which was amended in 2011 to mandate registration of all hijras (male to female transgenders), as they are wrongly suspected of kidnapping young men and raping them.

In addition, the Karnataka Beggary Act 1975 states that anyone found begging or loitering on the street is to be forcibly placed in an institution run by the government, such as the Beggars’ Home.

Zahida, a 38-year-old part-time sex worker from Karnataka, engaged in advocacy for the rights of sex workers in general, says “Many a time, the occupants of the Beggars’ Home are placed there against their will. The institution is inhabited mostly by people who are either street dwellers, or have lost their way due to unfamiliarity with the place, or those who are unwell, infirm or mentally challenged or emotionally unstable. None of these is a justification to institutionalise anyone compulsorily; that would be an utter violation of the human rights of an individual”.

The December 2014 arrest of the sex workers along with other persons seems to have stemmed from a Karnataka High Court order that said that the city must not have beggars. Female sex workers and transgenders, especially those who belong to the working class, tend to be arrested (often under false or flimsy grounds) or threatened by the police even if they are not begging.

In this context, we must remember that soliciting or practising sex work is not a crime in India although it must not be done within 200 metres of an educational institution or place of worship. However, an adult who lives off the earnings of a sex worker can be punished with a fine or imprisonment as per the Immoral Traffic (Prevention) Act 1956.

Additionally, the central government plans to introduce a bill that will legalize sex work by regulating the number of sex workers at a particular location and restricting sex work to specific areas. This law also intends to criminalise clients of sex workers or the buying of sex.

Apart from the police, other agencies of the state also discriminate against or interfere with the choices of sex workers in various ways, driven mostly by conventional social taboos. This is usually done with the intent to compel sex workers to leave their profession without understanding their realities or offering them satisfactory or pragmatic alternatives.

Rati, a social worker who campaigns for the human and labour rights of women employed in different occupations in the unorganized sector in Ranchi and a couple of nearby districts in Jharkhand, draws attention to such realities, pointing out that there are home-based sex workers such as Kusum and Shaili from Jharkhand, who are in their twenties and who resorted to sex work when young either out of choice or due to lack of other alternatives to make money. Often, they do not even disclose that they are engaged in sex work.

“These women are married and need to support their children on their own as their husbands migrate for work and visit their families once or twice a year at the most. Some of the men do not spend or share their earnings on their household or family. In fact, some women are sometimes forced to have sex with male labourers on their agricultural land as they are unable to pay wages to the latter,” says Rati.

In many families across India, women take to sex work as their husbands are either unemployed or give very little or nothing of their income to their wives, preferring to spend it on alcohol or other items.

She also shares that when the government offers sex workers subsidies or loans for income generation activities, they ask for safe and private spaces to carry out their profession instead. They refuse to discontinue sex work (as prescribed by livelihood schemes offered to them by the government) because it pays so much better than many occupations suggested as alternatives.”

Some sex workers migrate to different locations on a short or long term basis as they may be able to earn better, know more people, secure affordable accommodation or other reasons. Such workers face a struggle for existence when the government prohibits sex workers from travelling for their livelihood, as in the case when sex workers from Andhra Pradesh were barred from carrying out their profession in Goa through a government order.

Then, there are many police personnel and ruffians who abuse sex workers physically, verbally and sexually, demand free sex and sometimes incarcerate them.

In the face of such varied forms of repression by state agencies as much as society, sex workers continue to campaign for dignified treatment and recognition of their profession as a service. They strive to ensure that children are not trafficked into sex work. They struggle persistently to secure rights to refuse or to have sex; to live and travel and eat where they want; to decide whether to marry or not and whether to bear or adopt children; to vote, get healthcare and other basic rights and entitlements. Some even risk their lives to enlighten their peers about sexually transmitted diseases and how to prevent or treat them.

However, these realities are often ignored by people who believe that sex work is nothing more than sexual slavery and that people in the industry must be counselled, rescued and rehabilitated from sex work. Those who hold the belief that sex workers and their families cast a bad influence on society ostracize or insult them.

Commercial cinema perpetuates the belief that women sex workers are mostly immoral individuals who live and operate in unhygienic conditions and are unfit to become mothers or wives. The documentary film Zinda Laash: Norms for Dhandewaalis, a 15-minute production by Bishakha Dutta uses satire to critique the negative stereotypes of sex workers portrayed through clips from Hindi movies made between the 1960’s and the millennium.

A report titled “The Right(s) Evidence: Sex Work, Violence and HIV in Asia which resulted from A Multi-Country Qualitative Study” documents the struggles of female, male and transgender sex workers in Indonesia, Sri Lanka, Myanmar and Nepal, highlighting and confirming some of the above points. Of course, many of their realities are similar to those of sex workers in India. Unless these issues are debated, understood and addressed, sex workers will continue to be denied fundamental human rights everywhere.

NOTE: Names of the sex workers were changed to protect their identity.

URL for this article
http://indiatogether.org/sex-workers-not-beggars-women