ENVIRONMENT/PUBLIC FINANCE
Arunachal wildlife protection: fence eats crop
A grim picture emerges out of a performance audit of the Arunachal Pradesh government's work on 12 protected areas. The Comptroller and Auditor General's recent report is a telling comment on the state's commitment to wildlife protection. Himanshu Upadhyaya has more.
16 April 2007 -

A recent Comptroller and Auditor General (CAG) report for Arunachal Pradesh carried out performance review of wildlife preservation activities and pointed out a number of failures of the state administration. Rajib Sharma, Principal Accountant General (Audit), Arunachal Pradesh, Meghalaya and Mizoram has signed the report, and Vijayendra Kaul, the CAG, has countersigned it. The audit found that the objective was not achieved in full due to non-approval of Management Plans, delay in release of funds, absence of financial control and failure to declare 10 kms area around the Protected Area (PA) as an ecologically fragile area. The audit scrutiny was undertaken through test check of records in offices of the Principal Secretary, Principal Chief Conservator of Forests (PCCF) and Chief Wildlife Warden (CWW), Itanagar including the records of six PA out of twelve PAs for the last five years. 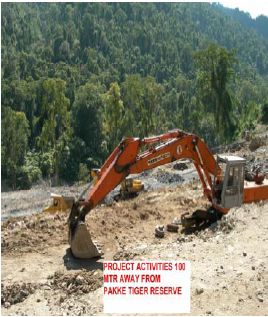 The State of Arunachal Pradesh (AP), rich in forest and wildlife, has 68847 square kilometres (sq km) of forest cover area. The State Government had notified two reserves Namdapha and Pakhui (Pakke) for Project Tiger (PT), one Elephant Reserve (ER), Kameng, eight Wildlife Sanctuaries (WLS) and one National Park (NP) covering 11420.485 sq km (out of 68847 sq km) spread over 10 out of 16 districts. The notification was done to bring them under Centrally Sponsored Schemes (CSS) between June 1978 and June 2002.

In order to justify the continuance of support from the schemes during the Tenth Plan, it was envisaged that Divisional Officers would prepare the feasibility reports and get them approved from GoI. However, none of the managers of the protected areas (PAs) except Namdapha Project Tiger, prepared any such proposal, says the CAG in its report. Thus, no planning was in place for implementing the wildlife conservation in the state during the Tenth Plan.

A crucial instrument for ensuring policy based action for scientific management in PA is a Management Plan. The Management Plan describes (i) Zonation (ii) Resource management and development (iii) Protection of wildlife (iv) Fire management (v) Habitat management and (vi) Wildlife inventories and Census methodology. In the course of hearing T N Godavarman case, the Supreme Court had directed in February 2000 that conservation activities in a PA shall not be undertaken unless the Management Plan is approved by the GoI. It was found that between July 1995 and September 2004, while managers of 11 out of 12 PAs had submitted Management Plans to the state government for approval of detailed programmes of conservation activities during five to ten year periods falling between 1997-98 and 2008-09; the state government neither approved the MP, nor submitted the same to GoI for approval. In the case of the twelfth PA  Kameng Elephant Reserve  such a Management Plan was not even prepared till date.

Amongst the CAG's many findings included this: expenditure worth Rs.66.33 lakh incurred on the purchase of 33 wireless sets including generators was rendered unfruitful, because the equipment went out of order.

•  How much for that forest?
•  Convoluted financing of hydel

Thus, in the absence of an approved plan, conservation activities in each PA were carried out in an adhoc manner without prioritisation, apart from violating the Supreme Court's directives.

The annual programme of wildlife conservation activities in each PA is sanctioned by MoEF on receipt of Annual Plan of Operations (APO) from the state government prior to the commencement of financial year. The Annual Plan of Operations is formulated as a financial plan using the Management Plan as guideline. Accordingly, funds are to be requisitioned for and expenditure incurred for the purposes detailed in the Management Plan. It was found during the audit that state government had submitted APOs to the MoEF between May and July, which consequently led to delay ranging one to ten months in approval of APOs and release of funds by the MoEF. The impact was felt not only in terms of delayed release of funds, but it also affected implementation of the scheme in four PAs as no funds was released during two financial years, i.e. 2001-'02 and 2004-'05.

Even where funds have been received by state governments, there have been delays in their release to the individual programmes. A steering committee of Ministry of Environment and Forests (MoEF) had recommended in 2000 that state governments release funds to the managers of the PAs within six months of the MoEF releasing funds. Further, while hearing a Public Interest Litigation filed by Navin M Raheja, the Supreme Court directed in February 2005 that the state governments should release funds to field formations within 15 days of the sanction by the MoEF, so that the amount of the assistance is fully utilised for the purpose for which it was granted. 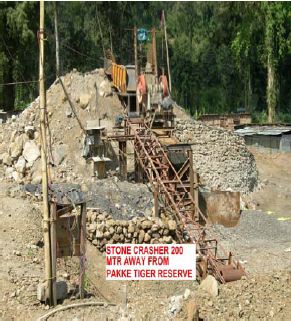 It was however, noticed by the CAG, that for each financial year the MoEF sanctioned and released funds between May and March and the Arunachal state government sanctioned and released funds belatedly between November and March. The extent of delay in release of funds ranged from two to nine months, and the PAs lost the benefit of central assistance of Rs.4.50 crore in the last five years because of unexpended non-recurring outlays.

The CAG further found that there were two cases of unauthorised release and utilisation  worth Rs.1.19 crores and Rs.88.29 lakhs respectively  in areas outside the notified Elephant Reserve, in effect depriving Kameng Elephant Reserve the benefit of project funds to that extent.

It was also found that the expenditure of Rs.66.33 lakh incurred on the purchase of 33 wireless sets including generators was rendered unfruitful, as they remained inoperative. It was found that Chief Wildlife Warden, Itanagar had purchased these sets in March 2002 and 2003 and installed these sets for protection duty outside the elephant habitats and corridors except at two places in Kameng Elephant Reserve, even though MoEF had sanctioned the fund under Centrally Sponsored Scheme (Project Elephant) clearly mentioning that these wireless sets shall be installed for protection duty in elephant habitation areas. Worse, the wireless sets had gone out of order within a short span of time after their installation (between April 2002 and June 2003).

Who are the officials 'indicted' by CAG?

One of the difficulties with the CAG's audit report is that it does not name any of the officials who have not fulfilled the obligations of their office. The report merely refers to them by designation.

A number of officers have served the relevant designations since 2001, and their names are listed below.

In three PAs, funds worth Rs 66.26 lakh were spent in 13 cases where the works were neither executed nor was any material received.

Beyond the grim picture that emerges out of the performance audit of these 12 Protected Areas, the CAG report presented a telling comment on the Arunachal government's commitment to wildlife. The CAG's comment must also be seen as critical of the MoEF, because page no.60 of the CAG report has three photographs of adverse impacts on ecology on protected areas due to construction activity of Kameng Hydro Electric Project (KHEP) by NEEPCO, a project that the MoEF cleared.

Under the Wild Life Protection Act, 1972 and the National Wild Life Action Plan 2002-16 the state government was to identify key factors responsible for degradation of habitats including grasslands, wetland, forests, etc. outside PAs particularly in areas adjacent to PAs. The process of identification and declaration of areas as eco-sensitive zone for protecting flora and fauna and their habitats was to be completed by 2004. Further, as per Wildlife Conservation Strategy 2002 approved in twenty-first meeting of the Indian Board of Wildlife (IBWL), land falling within 10 km of boundaries of PAs should be declared as ecologically fragile zone. Not only did the state government fail to initiate any action either to identify or to declare any area outside the boundaries of PAs as ecologically fragile till May 2006, it also failed to conserve areas adjacent to PAs from assaults due to construction activities for powerhouse of Kameng HEP.

The CAG report goes on to say, "Under the Forest Conservation Act, 1980, the MOEF, in consultation with the State Government, diverted 710 hectares of forest land falling within 200-400 metres of boundaries of Pakke PT and Eagle nest WLS in August 2000 for construction of KHEP. The KHEP started construction of roads, buildings, power house etc. in areas within close proximity (200-400 mtrs) of boundaries of PAs by mobilising huge work force and using blasting materials, heavy tools and plants etc. since 2001-02. Such activities created heavy noise and environment pollution in the area causing immense damage to the pristine ecosystem including flora and fauna of the adjoining PAs." To substantiate its report, the CAG has presented photographs of heavy machinery with outlining proximity to the reserve.

Now contrast this with the way ecological impacts of powerhouse construction were described in the KHEP's Environment Impact Assessment report prepared by Agriculture Finance Corporation Ltd. Mumbai: "as the activities of the powerhouse will be confined only in an area of 0.45 sq kms as against the vast sanctuary area of 861 sq kms, no disturbances are expected as the animals will naturally relocate themselves in suitable habitations in the deeper part, out of their instinct."

What is more disturbing is the fact that even the estimate of Rs.1.69 crore to improve the conditions submitted by managers of PAs submitted in the state's PCCFs office in April 2006 remains unused. Towards compensatory afforestation for the KHEP, NEEPCO paid Arunachal's Forest Dept Rs.6.41 crores. The moneys remained in the Reserve Funds under the head Forest Remittance between May 2000 and March 2005. This was in clear violation of Supreme Court directions of October 2002 that called for the creation of a Compensatory Afforestation Fund Management and Planning Authority, and MoEF notification of April 2004.

And, while we witness eloquent debates on expertise needed to ascertain why does the environmental legislation fail, more and more excavations and construction activities will keep devastating fragile ecology. It is time that CAG goes a step beyond and commits to bring a thorough review of environmental clearance process. The CAG is a member of the Working Group on Environmental Audit of the International Organisation of Supreme Audit Institutions. This Working Group has reported case studies how performance audit of environmental legislations on waste management, water resources and wetland conservation have been carried out in several countries by their audit authorities. In doing this in India, the CAG would only be putting in practice the expanded mandate it has received. Failing to do so would mean speaking one language at home and a different language at global platform.

URL for this article
http://indiatogether.org/arunacag-environment