MISSING INPUTS
CAG finds gaps in Arunachal education
While the infusion of SSA funds has helped the State make considerable progress on many counts, there is still much to be done, to ensure all the necessary inputs flow to the schools. Himanshu Upadhyaya reports.
19 December 2012 -

In last decade Arunachal Pradesh has made considerable progress in moving towards the goal of universal elementary education. While in 2000-01, before the commencement of Sarva Shiksha Abhiyan, there were just 1576 Primary and 537 Upper Primary government and government-aided schools; now the figures stand at 2718 Primary schools and 998 Upper Primary schools. Despite such a large number of primary schools added in recent years, there are gaps.

The 2011-12 Annual Work Plan and Budget of SSA Rajya Mission, Itanagar shows there are still 124 habitations, with 3809 children in the age group 06-14 years who are deprived of schools. A detailed scrutiny of the state's primary education system by auditors of the CAG (Comptroller and Auditor General's office) shows that even this number may be an under-estimate. There were eight more villages from Bordumsa-Diyum block in Changlang district that clearly needed a primary school, but didn't have one - and were not on this list, either.

The SSA Rajya Mission tried to explain this away, saying in October 2011 that "all these children will be admitted by setting up new primary schools during 2012-13, otherwise these children would be given admission in nearby residential schools". In the exit conference with CAG auditors held on 24 October, 2011 senior state government functionaries assured that "the matter would be looked into", and yet there was also a view that "in some cases the residents of the habitations themselves were not in favour of schools being opened in their habitations"!

While five years ago, 30,562 children (i.e. 9.64 per cent of children in 06-14 years age group) remained out-of-school, as per enrolment data during the year 2010-11, 11,343 children (i.e. only 3.24 per cent) were not in school. The State Rajya Mission argued that "the out-of-school children are [a] hard-to-reach category of children, in remote, far flung areas of the sate". However, if one glances through the number of out-of-school children across districts, it is clear that 4633 of them (i.e. 40 per cent) of them are from the relatively densely populated Papum Pare district, which is very close to state capital and is certainly most accessible and well-networked. 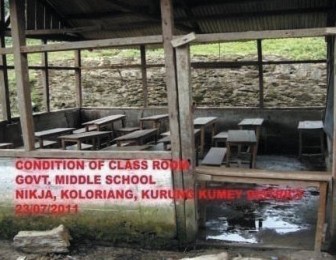 While 758 schools had only a single teacher, there were a few schools that had teachers but not a single student! (Pic: A dilapidated classroom in a middle school shows there is still a long way to go, even in providing basic infrastructure for education.)

A more likely explanation may be child labour. In any event, this district, as well as West Kameng which has 1006 children out of school, must both be on the list of priorities of the SSA Rajya Mission, which should carve out a strategy to reduce the numbers to zero.

On dropout rates also, Arunachal has recorded huge improvements in the last five years. While 38,079 children dropped out of primary and upper primary schools in the year 2006-07, in the year 2010-11 their number had come down to 15,753. The CAG audit report doesn't give us district-wise data on dropout rates, but it would be of interest to check how Papum Pare and West Kameng fare on that front.

Pupil-Teacher Ratios in the state are healthy, with 1:26 the statewide average for upper primary schools, and 1:16 for primary schools. However, like many other hilly states with plenty of remote regions, here too we witness uneven distribution across locations and blocks. For exmaple, while there are blocks that report 1:16 PTR at primary level and 1:10 at Upper Primary level, there are also blocks like Damin Parsupurlo and Mengia which report 1:62 and 1:55 PTR respectively at primary level, and Kaying Paum block that reports 1:42 PTR at upper primary level.

On the other hand, audit scrutiny of records pertaining to Lohit district showed that there were two primary schools, viz. GPS Danglat, New Basti and GPS Danglat, Mepo Basti in Tezu Sunpura block that together had three teachers but no students! To make the matter worse, one more teacher was posted during the year 2011-12 to meet the norm that every school shall have at least two teachers! This clearly calls for rational distribution and revision of teacher postings, an intervention that needs to be faced along with innovative strategy.

SSA Rajya Mission responded to this finding by stating that "the district authorities would be asked to rationalize the teachers' deployment within six months". This kind of 'will-take-action' response is now standard whenever agencies that are pulled up by the CAG respond to negative findings; this needs to be accompanied by some action taken against those responsible for such things happening in the first place.

To initiate action on an innovative strategy, SSA Rajya Mission can start committing itself to design the annual plans and budgets in a bottom-up fashion ensuring people's participation. The CAG audit noted that no household survey was carried out during the last five years, and hence the annual plans were made in an ad hoc manner. Audit scrutiny of annual work plans and budgets in Papum Pare, Changlang, Lohit, Kurung Kumey and West Siang revealed that village and habitation level plans were not prepared, information collected from Block Resource Centres was simply fed into making a District Annual Plan.

While the state should ideally have 16 District Institutes of Education and Training, it had only 11 such institutes in 2010-11. The CAG noted that "these institutes are poorly staffed and had very little facilities for research and training activities". Although funds for a State Institute of Education Management and Training was sanctioned in 2002-03 at the cost of Rs.3 crores by the Union Government, and Rs.50 lakhs of these were even released and spent on the construction, the institute hasn't become functional so far. The state has also failed to set up the State Council of Education Research and Training, and as a result no educational research, innovation and curriculum development activities are ongoing.

The CAG report is a useful pointer to the specific lacunae on different fronts, in providing the necessary inputs to the education system. At the moment, the government - both at the Centre and the States - appears to be focused only on inputs, and there is no mention anywhere of outcomes and output. Given that, it is important that Arunachal and other states should at least get the input side right. Without even this minimum, countless children will never have a fair chance in life.

URL for this article
http://indiatogether.org/arunachal-education--2