Bhopal : a new momentum
Campaigners for justice in Bhopal end the year on an optimistic note, reports Tarun Jain.
01 December 2003 -

As 2003 draws to a close, there is more hope for justice to Bhopal's victims. This month saw vigorous action and mobilization for the survivors from the 1984 tragedy and the global community of activists that aid them in their struggle. On, Dec 3, highlighted as a "Global day of action against corporate crime", the survivors reiterated their main demands - the extradition of Warren Anderson, one the prime accused in the criminal case, provision of continuing long-term care for exposed persons and future generations, cleanup of the Bhopal factory site by Dow-Carbide and provision of economic and social support. 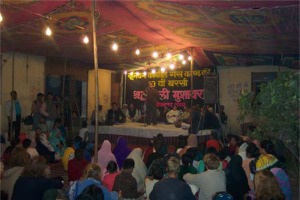 At the Union Carbide factory site in Bhopal, survivors resolved to channel the global groundswell of public opinion in their favor to force the Government of India and the perpetrator of the disaster, Dow-Carbide, to address the pending liabilities in Bhopal. "As we enter the 20th year of our struggle for justice, we thank our supporters worldwide for acknowledging the ongoing health, environment and social disaster caused by the refusal of the Government and the polluter - Dow Carbide - to address pending liabilities in Bhopal. We are confident that the coming years will be a watershed for Dow Chemical and the Indian Government as grassroots mobilization forces them to address the pending criminal and civil liabilities in Bhopal," said Rashida Bee of the Bhopal Gas Peedit Mahila Stationery Karmachari Sangh. Bhopal survivors took out a torch light procession and organized a mushaira by 22 local poets.

Public awareness and memorial actions by students, trade unions and activists in Baroda, Mumbai, Delhi, Tamilnadu, Kolkata, Andhra Pradesh, Kerala, Bangalore and Jamshedpur supported the survivors in Bhopal. Over a hundred people lay down on Mumbai's Marine Drive sidewalk to recreate the horror of Bhopal where the streets were lined with corpses the day after the disaster. As chalk outlines were drawn around the "bodies", the activists held up banners that said "Remember Bhopal" and "Dow - you have the blood of Bhopal on your hands." "Bhopal has become the icon for corporate negligence resulting in death and destruction, representing the thousand Bhopal-like disasters that take place all across India," said Vinod Shetty, an eminent lawyer attending the event.

The evocative power of the Bhopal survivor's campaign was evident by the extent of support around the world. In the United States, activists, many of them young students, focused on pressurizing Dow Chemical to take on liability and clean up the plant site in Bhopal. The result was one of the most sweeping protests that Dow has faced since the Vietnam War. Activists targeted the company's "overseers" - it's Board of Directors - and asked them to take personal responsibility for Union Carbide's involvement in Bhopal. (Dow Chemical acquired Union Carbide in February 2001).

At Princeton University, former university president Harold Shapiro is the Presiding member of Dow's board and a speaker and expert on bio-ethics. After delivering a speech on ethics, he was approached by students who presented him with a sample of Bhopal's contaminated water and a testimonial from a survivor from Bhopal. Shapiro was forced to accept the water even while he maintained that he did not want to discuss Dow Chemical at an ethics event. Similar offerings of contaminated water were made to other Dow board members. In Milwaukee, Dow director James Ringler refused to accept the water and yelled at the activists near his house. Kamayani Keki, one of the activists, wrote, "The callousness, anger, irritation and most evident the fear - fear of four very ordinary people with a just cause - was evident in Ringler's action." Other board members visited were either not home or hid quietly inside, with houses dark and lights off.

Elsewhere, the day was marked by film screenings, candlelight vigils, personal testimonies and teach-ins at over 20 American colleges and universities, and 14 other countries. In the Scottish parliament, Scottish Socialist Party MP Frances Curran presented a motion reiterating each of the survivors' demands to Dow. This echoed a similar amicus brief filed by nine American Congressmen in the US Court of Appeals for the Second Circuit on behalf of the survivors in October.

The marked solidarity on this year's anniversary of the disaster was preceded by a busy year for the survivors. In May 2003, two survivors and an activist launched an indefinite hunger strike in the United States to force Dow executives to meet with them to discuss the case. In July, efforts to bring former Union Carbide chairman Warren Anderson to justice received a major boost when the Indian government filed and extradition request with the US State department (see side-bar below). That followed 2002's successful effort by Greenpeace to track down Anderson living in New York.

This year also saw victims and survivors organizations reopening a class action suit in New York on the issue of contamination by approaching the Appeals Court on April 25. The case appealed against a decision by Judge Keenan of the Southern District Court of New York dismissing claims filed asking Union Carbide to clean up the toxic wastes in Bhopal and compensate people affected by consumption of contaminated water.

2003 ends with a new momentum for Bhopal's campaign for justice. Worldwide support has registered an increase.  •  See also: Extradition request

The abandoned factory site in Bhopal contains stockpiles of dangerous chemicals. Solvents spilled or leached into the soil have migrated into the ground water that local inhabitants still use for cooking, washing and drinking. Studies have shown that the mortality rate for the exposed community remains starkly higher; currently around one person succumbs every day to gas-related illnesses. Even the generation born after the disaster suffers from physical deformities and stunted growth.

With the struggle for justice enters its twentieth year, finding closure to the events of December 3rd, 1984 remains very much that, a struggle. But given the new momentum to the campaign, surviving residents are more hopeful for some resolution.

Tarun Jain volunteers with the Association for India's Development (a US based non-profit organization) and a student at the University of Virginia. ICJB is the International Campaign for Justice in Bhopal. www.bhopal.net.

URL for this article
http://indiatogether.org/bhopal03-human-rights