Biographical or autobiographical plays are not very popular they say. But Binodini Dasi (1863-1941), better known as Nati Binodini is an exception. Plays on Binodini's life and career have been staged over and over for a long time now mainly because the story of her life is more dramatic than the ones we read in fiction and has more twists and turns than a film script. The 'nati' in her name means 'actress.' Binodini carved an immortal place in the history of Bengali theatre not only for her talent and her versatility as an actress, but also for the sacrifices she made in the cause of theatre, her first love. She documented the story of her life in two separate autobiographies, Aamar Katha (My Story) and Aamar Abhinetri Jeebon (My Life as an Actress.) Kali for Women has published the English translations by Rimli Bhattacharya.

These two books, and Nati Binodini, a jatra-play by Brajendra Kumar Dey whose birth centenary falls this year, formed the basis for three plays screened at a theatre festival in Kolkata between November 1 to November 4 dedicated to the memory of Nati Binodini. Academic Theatre, an organisation founded in 1984 to conduct research into the history of the Bengali stage in general and its music and lyrics in particular, put this festival together with the hope of reviving interest in the history of theatre as a dynamic form of performing art that defines an integral part of the cultural history of Bengal. 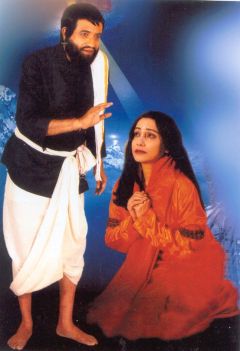 The festival offered a major retrospective through the tragic life of Binodini, tracing the evolution of the Bengali stage in terms of its craft, the genres it threw up, its of choice of subject and theme, its melodious music and meaningful lyrics. Perhaps the festival also made the viewer draw parallels between a woman's life as an actress and her life as a woman deprived of the experiences of mainstream womanhood where the two worlds sometimes meet, overlap and then part, never to meet again. Does this hold true of the actress of today?

Delhi's Theatre and Television Associates staged Nati Binodini (Hindi) under the directorial baton of Amal Allana. Based on Rimli Bhattacharya's English translations of Binodini's two autobiographies, the play had a strikingly original conceptual design. Five different actresses portrayed Binodini, representing different ages, present on the stage at the same time. Except the seniormost actress, the other four were dressed and made-up identically. Structured in the flashback mode with the telescoping of the present and the past, the play opened with the octogenarian Binodini writing out her autobiography.

As she reads what she is writing, the past unfolds different layers of her life, segments from plays she has performed in, her interactions with her mother, a prostitute who forced her daughter to become a mistress, her relationship with her guru and mentor the famous Girish Chandra Ghosh, and her constant conflicts between her personal and professional life forced on her by none other than her peers on the stage and by her mentor himself. The acting cast performed brilliantly though to begin with, the structure was confusing with five actresses on the stage playing Binodini. The focus was more on the actress' sexual and emotional exploitation than on her genius as an actress whose range, under the guidance of Girish Ghosh, was phenomenal.

Binodini played the title role in Prahlad (male). Her other famous plays are Sri Chaitanya where she once again played the title role. She also did a very significant role in Neel Darpan, Sarojini (written by Jyotirindranath Tagore) and Sadhobar Ekadashi (by Dinabandu Mitra).

Binodini's first appearance on the newly-constructed Star Theatre at Beadon Street happened as Sati in Daksha Yajna in 1884. Her last performance in the same theatre was in the play, Bellick Bazar on 1 January 1887.

Nissar Allana's split-level stage design and mood lighting combined with Amal Allana's costumes and Devajit Bandopadhyay's music enriched the tapestry of the production. The only thing that diluted the performance was the emphasis on the overdoing of the weepy element. It was more multi-lingual than Hindi since there was a lot of Bengali in the dialogue and the songs, while Girish Ghosh used a smattering of English now and then. Jayanto Das as Girish Ghosh and Swaroopa Ghosh as the slightly older Binodini were incredible.

When the theatre company that took Binodini to starry heights began to collapse, in 1883, her mentor persuaded her to become the mistress of Gurmukh Rai, a rich Marwari businessman who was a devoted fan of Binodini. The actress, hating to go back to her old life of prostitution, rejected the idea. But her love for the stage and empathy for her peers whose lives were endangered, won in the end and she succumbed to pressure. Instead of accepting a cheque for Rs.50,000 from Rai, Binodini asked him to build a theatre hall.

Rai, besotted with Binodini, agreed at once, but on condition that the theatre hall would be named B-Theatre, after the first letter of Binodini's name. But after the theatre's name was registered, Binodini was shocked to discover that her name was rejected in favour of another name, Star, in 1884. Her peers and mentor had decided that a theatre house named after a prostitute would fail to draw audience for their plays.

When Binodini was performing in Sri Chaitanya in the title role of the Vaishnava saint, Sri Sri Paramhamsa walked up to the stage after watching the play, placed his hand on Binodini's head and blessed her. From that time on, Binodini gradually began to withdraw from the stage and finally quit after dominating the Bengali stage from 1873 to 1886. She married a local zamindar -- popularly known as Ranga Babu, a nickname -- who was patiently waiting in the wings and the couple also bore a daughter, Shakuntala. According to Devajit Bandopadhyay, widely known as the best living scholar on Bengali theatre and its music, the descendants of this zamindar are still alive and are political leaders and powerful people. Shakuntala died when she was only 11, the age when Binodini had stepped on the stage for the first time as an extra. Soon after, her husband and benefactor also passed away when Binodini was in her mid-thirties, leaving her alone and isolated, with memories to lean back on till her death.

The entire life of Binodini unfolded in the second day's performance of Nati Binodini (Bengali), staged by Kolkata's Bharattirtha Jatra Samaj in Bengali. This was a straight dramatisation of Brajendra Kumar Dey's jatra-play on the actress's life written many years ago. The 180-plus minutes production began with the widowed Binodini weeping at the burning pyre of her dead husband. It then moves into the past and unfolds her life from the time she began her career on stage. Halfway through, the play shifted focus to the influence of Sri Sri Paramahamsa on Binodini, the woman and the actress, and on her mentor, Girish Chandra Ghosh, who was an atheist and was transformed when Paramahamsa entered his life. But Binodini remained the centre stage.

Tapasi Roy Choudhury as Binodini has also written the lyrics of the songs and set them to music. She sang them beautifully but the same cannot be said of her acting, dress and make-up all of which were too modern, contemporary and sophisticated to fit into a period character picked from history. Despite the brilliant acting by the entire cast other than the protagonist, good stage design and lighting, the play lost its intensity mainly due to its length made lengthier through needless comic intrusions created to accommodate needless costume changes. Prabhat Chakraborty, playing Paramahamsa, was outstanding.

The third play, Binodini (Bengali) on a script based solely on the two original autobiographies of the actress, came from Dhaka Theatre, Bangladesh. It was a one-woman performance by Shimul Yusuf, a noted actress of the Bangladesh stage. But more than a play, it was an all-round, comprehensive performance that blended many styles of the performing arts - recitation, songs, music, dance, stylised movements, long monologues, dialogues exchanged between two characters but enacted by one actress, in a magic unfolding of the life of Binodini Dasi. 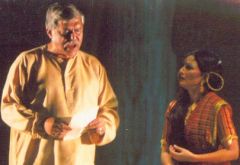 Still from another Nati Binodini play at the festival.

The middle-aged Yusuf, under the directorial baton of Nasir Uddin Yusuf, used the entire space of the proscenium stage - vertically, horizontally, even circularly, with props used as vehicles and aids to expression and acting. Minimum props placed on stage were pegs to hang her acting on - coloured chunaris she used to change the character with a single twist of the garment, a reclining chair here, a stool there, were enough to give her the support she needed. The musicians sat like a chorus at the back of the stage space, a harking back to old Bengali stage performances. Ishrat Nisat's light design and Kamaluddiin Kabir's sets offered background support without intruding into the performance. Yusuf's performance was so smooth and seamless that she could easily bridge the gap between the audience and the actor without having to leave the stage.

The three plays presented the same story of Binodini Dasi from three completely different perspectives in their distinct ways. The concluding night saw recitations from Binodini's autobiography by Soumitra Chatterjee and songs composed and performed on stage during the time of Nati Binodini sung by Devajit and Riddhi Bandopadhyay under the title Binodini-Kaaler Natya-Sangeet. This festival dedicated solely to celebrate the memory and contribution of this great actress is not as surprising as the fact that the audience at the G D Birla Sabhagriha from November 1 to November 4 consisted majorly of men and women in their fifties. Youngsters who attended are from within the theatre fraternity of Calcutta.

Ironically, soon after Independence, in the late 1940s, the powers-that-be in Kolkata decided to construct a broad road which is now known as Central Avenue. Many theatre houses were mowed down for the broadening of this road. Among these were Manmohan Theatre and Star Theatre built by Rai. The Star Theatre we see today is a different one.

URL for this article
http://indiatogether.org/binodini-society