Mothers of the Earth
The knowledge of growing conditions and nutritional traits of plants not only gives rural women a unique, crucial edge in seed selection and breeding, it also helps them maintain the genetic diversity required for adaptation to fluctuating weather. Despite this, the role of women in protecting biodiversity is largely unrecognised, writes Ramesh Menon.
06 July 2005 -

India is one of the twelve-mega biodiversity areas of the world with over 45,000 wild species of plants and 77,000 wild species of animals. The Convention on Biological Diversity recognizes that the biodiversity occurring within the political frontiers of a country is the "sovereign property" of that country. If that is so, India owns an extremely rich genetic estate.

But all that may be glory of the past. Today, over ten per cent of India's recorded wild flora and fauna are on the threatened list. Many are on the verge of extinction. In the last few decades, India has lost over 50 per cent of its forests and polluted over 70 per cent of its water bodies. It has built or cultivated over most of its grasslands. It has degraded most of its pristine coasts. As if this was not enough, animals like the tiger and the rhino were hunted down. The green revolution opened the door for chemical fertilizers and pesticides and due to their overdose, poisoning of land started. India is today not only the largest producer of pesticides; it is also the largest consumer. All this has taken a heavy toll on biodiversity.

Knowledge of the seed and the cycles of farming is usually in the head of the woman. Pic: CARE India.

Clearly under threat, a well-planned concerted programme will be required to salvage Indias biodiversity and nurture it. No one can do it better than women. Points out S.K. Pande, a former Director General of Forests: "Rural India has a women centric agriculture system. Nothing can happen without them. Women are a great repository of biodiversity knowledge, as they intimately understand it. If animals are sick, they know what medicinal plants have to be administered. Women have the greatest concern as far as protecting biodiversity is concerned and they have to be brought in if we are serious about conservation."

The Food and Agriculture Organization in one of its publications, "Gender-Key to Sustainability and Food Security", underlines that rural women in developing countries hold the key to many of the earths agricultural systems for food production, seed selection and protection of agro biodiversity.

India has an amazing biodiversity a result of its varied climate, soil and its rich cultural and ethnic diversity. Atleast 166 species of crops and 320 species of wild relatives of crops are known to have originated in India. An estimated 50,000 to 60,000 varieties of rice grew in India.

There are over 53 million tribal people belonging to 550 communities. Nearly 80 per cent of the north Indian states of Meghalaya, Nagaland, Mizoram and Arunachal Pradesh belong to tribal communities. The genetic resources in the area include coir, jute, rice, maize, citrus, buckwheat and several beans.

In many ways, the relationship between women and forest resources parallels that of rural women and agriculture. Trees and forest ecosystems are to the rural women of developing countries what the supermarket or hardware store is for those in industrialized countries, says a forest official. For many landless women, the only source of income is often just the forest produce. Women are dependent on forests for food, fuel, fodder, medicines, fibers and so on. Moving in and out of forests, women have down the years accumulated loads of knowledge in the sustainable use of natural resources as well as numerous insights of the value of biodiversity.

Though women can play a significant role in protecting biodiversity, it has not been recognized. Their role in conservation has been overlooked. The loss of habitats and biodiversity mostly affects the underprivileged  and many of them are women.

If large numbers of women participated in mass movements like Chipko in the upper reaches of Himachal and Uttar Pradesh, it was with good reason. They had a stake in protecting local biodiversity and natural resources like wood and water as additional burdens fell on them when these resources dried up. In community conservation efforts, they have played a major role especially in areas of seed selection and preservation. At a temple in Along, Arunachal Pradesh, women are respected for domesticating rice.

Says Suman Sahai, who heads Gene Campaign, a New Delhi-based NGO says that biodiversity gets protected when the community sees a use for it. "The more our economy and our resources are seen in purely commercial terms, the more are the chances for biodiversity that is not of immediate use to be left unprotected. Women still use medicinal plants and leafy greens found in nature to supplement the family's nutrition and so they naturally tend to protect that kind of biodiversity", says Sahai.

In states like Uttaranchal, Himachal Pradesh and Andhra Pradesh, women have a large share of jobs on the farm in addition to the household work and tending of children and the family. Though their responsibilities have soared, they still have no rights to the land they work in. They rarely hold land titles. Women who work on the family farm feel that they are not working on their own farm, as they have no legal rights to the land. They toil in the fields all year long, but once the crop is harvested, it is the men who take it to the market.

Usually, work on a farm is divided on gender lines. Men usually plough, though nowadays, women also do it, even in conservative rural Andhra Pradesh. Women are generally responsible for sowing, hoeing, crop maintenance, harvesting, food processing, storage and finally, the intricate expertise of seed selection for future planting. 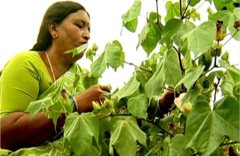 The roles of women are distinctly different from men. Naturally, their perspectives and understanding of biodiversity are different. Women have a natural stake in protecting biodiversity.

P.V. Satheesh, Director, Deccan Development Society, Hyderabad, says: "Women are the final caretakers of genetic and species diversity in agriculture. The knowledge about the seed and the way it should be stored and sown is in the head of the women and not the man." The knowledge of the necessary growing conditions and nutritional characters of various species gives women a unique, crucial repository of experiences in seed selection and plant breeding. It is this knowledge that helps women to maintain the genetic diversity required to adapt to fluctuating weather patterns to ensure the survival of traditional crops. Such a role assumes great importance in an era of increasing hybridisation and monoculture.

But planning does not take rural women into account

Tragically, all this knowledge accumulated through sheer field experience and traditional wisdom is hardly acknowledged. As the role and knowledge of women is undervalued, development planning also ignores their needs. Says Sahai: "Though the biodiversity legislation acknowledges the role of communities in the protection of biodiversity, it fails to mention the role of women. Due to the patriarchal system, the role of women in many ways is not acknowledged." Sahai adds that even the chipko movement, which was essentially thought of by women and carried out by them, is not today known as their contribution as the effort was hijacked by many male environmentalists.

Food analyst Devinder Sharma says that several Indo-American seed companies are actually using women by employing them as cheap labour claiming that they are doing so as they are the custodians of bio-diversity. "The truth is that the knowledge of the women is not being conserved. The new Seed Bill says that only those seeds should be used which are registered. It is only seed companies which will register low quality seeds. Do you expect a rural woman who has deep knowledge of hundreds of unique seeds to go and get it registered?" asks Sharma.

It is hardly surprising to see that even national economic accounting and planning does not value the contribution of women in protecting biodiversity. So, when plans are drawn up, it is men who are targeted for programmes related to reallocating land, training needs, granting of credit and increasing cash flows. Most of the time, the system would promote cash crops that men are interested in. As if women did not matter.

Women can play a stellar role only if they have land tenure or ownership rights. Only then can they invest in long-term conservation practices and not look at short-term cash crops like men. 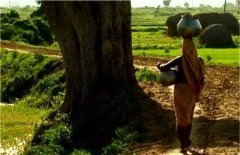 The ways in which men and women have traditionally managed their seeds, plants and animals are fast changing in rural India. Agricultural policies often end up changing dietary habits. This often ends up in tribal and rural families abandoning their traditional foods. For example, studies in Gujarat where India's white revolution took off have shown that rural families stopped drinking milk and consuming milk products as much as they did before, as milk became a source of immediate cash with milk cooperatives buoying it from them. Likewise, as economic pressures push more women into marginal lands, they may be pressured into abandoning sustainable practices. After all, immediate needs must be met.

Instead of improving the lives of the rural poor, modern agricultural development strategies like higher yields have contributed to environmental degradation and biodiversity loss. This, in turn, has ended up increasing the workload of women and cutting down on their innate strength of catering to their families' needs.

Says Sahai: "Women can become vocal and demand the protection of common resources by the community. This is beginning to happen more and more and must be encouraged by enabling policies and granting freedom to act by the local administration. It does not help when the local administration hinders even the collection of legitimate forest produce." To get their rightful space to protect biodiversity, India's rural women may have to put up a fight. It may well be worth it, not only in their own interests, but for preserving the pristine wealth that nature bestowed for all of us on earth.

URL for this article
http://indiatogether.org/biodiv-women