FERTILIZER SHORTAGES
From market yard to police yard
Fertilizer shortages have sparked unrest across large swathes of rural Maharashtra and other States as well. In Washim, every constable and officer is deployed right within the police compound, distributing fertilizer. P Sainath reports.
23 June 2008 -

"It's not an easy job," says Inspector Devidas Chaudhury, officer in-charge of the Washim police station. "But it has to be done. There could be serious trouble otherwise." Almost every officer and constable at the station, which appears under siege, are deployed here, right within their own compound. Only, the enforcers of law and order are not fighting angry mobs or staving off a terror attack. They're distributing fertilizer to furious farmers.

They are organising them into queues, creating lists and verifying coupons. And directing the close to 200 peasants crowding the station yard over a mike and public address system. There's a tragi-comical touch to it. Rarely has fertilizer been distributed under such tight security, by men in uniform. The cops are as bemused by the situation as the farmers are.

Fertilizer shortages have sparked unrest across large swathes of rural Maharashtra and other States as well. In Washim, they hit particularly hard. Washim is a part of Vidarbha where soybean overtook cotton a few seasons ago. Soybean requires fertilizer right at the time of sowing. That time has arrived with the monsoon. The fertilizer has not. And it is driving farmers crazy.

Fertilizer shortfall in Maharashtra could be as high as 60 per cent. And what fertilizer does arrive becomes the target of profiteering and illegal operations. The runaway price rise adds to this explosive mix. Several regions have seen police lathicharge farmers protesting against the crisis. 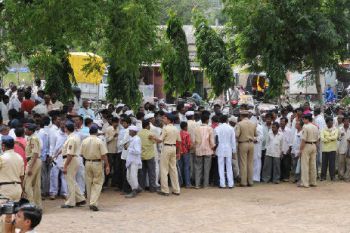 Policemen at the Washim station, from where fertilizer is being distributed, try to organise anxious farmers into queues. The angry farmers grudgingly concede the police are doing a good job. (Picture by P Sainath)

So why did the fertilizer end up being distributed from the police station? And how do the cops go about it? Inspector Chaudhury admits the procedure is not written into the police manual. "But it will become our job anyway if there are riots in the marketplace, won't it," he asks. "There was terrific tension in the market. [Some dealers were too scared to open.] There was an imminent threat to law and order. In these troubled situations, where there are so many people gathered, pickpockets and others target poor farmers. Also, what if a stampede broke out? There were vulnerable older people there. I thought it best if we shifted it to the station where we would be in control."

"There was no choice, really," confirms Arvind Salve (Acting) Superintendent of Police in-charge of Washim. "You cannot protect every outlet in the market. So it made sense for it to work out of here. And some of the dealers feel safer, too." One of them, Vinay Biyani of the Vinayak Krishi Kendra, certainly does. "I alone have brought more than 300 metric tonnes of fertilizer to the station yard in the past five days," he says. The angry farmers grudgingly concede the police are doing a good job of it. "It was getting too much into the black market," says a chorus of voices. "At least here, there is some transparency."

All transactions in the police yard occur under intense public scrutiny. In the marketplace, dealings are more opaque. True, there are also farmers critical of the process but with everybody's nerves on edge, that seems natural.

From cotton to soybean

"It's not just fertilizer, seeds are also in short supply," say the assembled peasants. Interestingly, many of these farmers have shifted from cotton - for long the King in Western Vidarbha - to soybean in just the last few seasons.

"There are no seed problems in Washim," declares district Agriculture Officer N.V. Deshmukh. "There are none amongst private dealers," he says. But it appears that the seed given out under the Prime Minister's "relief package" has created confusion.

All transactions in the police yard occur under intense public scrutiny. In the marketplace, dealings are more opaque.

•  What a lovely waiver!

Who is entitled to these cheaper seeds? That question becomes more acute as prices rise. "The more real problem is the fertilizer, but I think that will also be overcome in a while," says Mr. Deshmukh. However, if the pause in the rains stretches much longer, farmers will have to go in for re-sowing. And there will be no subsidised seed the second time around. They could thus lose up to Rs.2,000 an acre.

In Chikhli in Buldhana district next door, the police caned a mob of farmers protesting what they saw as rigging in seed distribution. Here too, the dispute was over 1,600 bags of seed being handed out as part of the Prime Minister's package. In Pinjar in Akola, seed distribution saw a stampede leave several injured. In Nanded in Marathwada, the police had to intervene after enraged farmers ransacked some shops.

The State government believes the disruption of rail freight traffic by the Gujjar agitation led to the shortages, with fertilizer piling up at the ports. With the agitation ending, normalcy would return. "We have solved the problem of fertilizer," Agriculture Secretary Nanasaheb Patil told the journal AgroOne. "The Chief Minister himself has spoken to the Prime Minister and [the] Railway Minister asking for more rail wagons to move the held-up fertilizer."

On the ground, others are less sanguine. "There is the larger issue of a production shortfall and government's inept planning," says Kishor Tiwari of the Vidharbha Jan Andolan Samiti. "Imports will get tougher with global prices four times what they are here. The fuel price hike sends all prices soaring still further. So naturally, there is a demand for the subsidised, cheaper seed. Then there is the exploitation of scarcity. But most top dealers or distributors are well connected politically, the scions of important families, with links to government. Can they be arrested?"

Mr. Tiwari cites a third reason for the shortages. "Dealers backing cotton - in a region where Bt cotton now reigns supreme - fear the ongoing shift to soybean. That rapid shift would rob them of their golden goose. Hence the seed and fertilizer shortages target those trying to shift to soybean more than others."

Vidarbha's leading intellectual on agrarian issues, Vijay Jawandia, agrees. "The fortune of the input dealers is in Bt cotton seed. There is no benefit for them in the shift to soybean, at least for now."

"The immediate crisis might be resolved, but the problem won't go away," says Mr. Tiwari. One group of people fervently hoping it will go away are the cops at the Washim police station. Just now, though, they're too busy to say so. There is still all that fertilizer in their yard to distribute.

P Sainath is the 2007 winner of the Ramon Magsaysay award for Journalism, Literature, and Creative Communication Arts. He is one of the two recipients of the A.H. Boerma Award, 2001, granted for his contributions in changing the nature of the development debate on food, hunger and rural development in the Indian media.

URL for this article
http://indiatogether.org/blues-agriculture