OPINION/GOVERNANCE
Better traffic ahead
Fundamentally, the challenge of traffic and transport management in any of our large cities is not merely to create more road infrastructure. The more powerful way to tackle the problem is through analysis of road use patterns, and through the creation of transport services based on them, says Ashwin Mahesh.
05 July 2007 -

If you were late getting somewhere today, chances are that traffic played no small part in that outcome. Did you allow enough time for your journey? Were you caught in a jam unexpectedly? Were there alternate routes available that you could have taken once you began the trip? And could you have got this information even without your computer handy to check a web site?

Between late 2004 and mid-2006, I spent countless hours caught in Bangalore traffic as I commuted to work between arguably the two worst locations in the city - the Bannerghatta Road area in the south, and the Indiranagar area north of the then-3-years-and-counting flyover on the Airport Road at Domlur. The locations may be unfamiliar to non-Bangaloreans, so I won't dwell on them, but I am sure that similar horror stations abound throughout other cities in India too. Urban traffic is, to put it mildly, a space gone so awry that even restoring a semblance of order is going to be a challenge for many years.

Stuck, for the moment

There are many reasons for this, not the least of which is that our cities generally do not have metro area-wide traffic and transport planning authorities with jurisdiction, resources and latitude to solve the problem. In most cities, traffic is 'managed' by a group of role-players from various representative departments - the utility boards, bus operators, traffic police, urban development authorities, the municipality. But with each of these institutions mostly engaged in its own challenges, there is little opportunity or room for developing solutions. In some cities, transport committees are also stacked with persons of questionable value to the city or to public administration, as politicians happily hand out patronage jobs without regard to qualification or skill.

Add to all this, the fact that positions in government are no longer attractive to technical problem-solvers, and the likelihood of public administrators themselves hitting upon solutions also is small. "Traffic management is like chip design," my colleague Srikanth Nadhamuni, himself a former chip designer, used to say. Meaning, that if you try to solve the problem piece-meal in one or two locations, it will simply re-surface elsewhere. What is needed, instead, is network analysis and design that allows the entire complexity of relationships between various points to be understood. And people who can do those things are turning their backs on government jobs; their economic and intellectual rewards in private industry are simply too much greater.

Inevitably, all of these structural and societal problems arrive at the doorstep of the traffic police, who are expected to manage - and even improve - traffic conditions, despite having very little authority in so many of the areas that impact traffic - like land use, vehicle registration, transport pricing, road development, and equally, very little latitude to hire and retain technically skilled personnel. While the police too have copped their share of criticism, it is certainly true that today's traffic police, in particular the lower ranks, work in abominable health conditions, amidst extreme physical danger to themselves. Police duty is also round-the-clock, and highly subject to the expectations of politicians; this results in a virtual beck-and-call situation for most personnel.

Of course, traffic can be worrisome even in well developed cities, but short of a revolution in urban land-use and transport, especially public transport, there are few options available to public administrators. With the result that most civil servants in charge of traffic tend to look for measures that alleviate the problems. This is understandable, given that actually solving the problem requires many other things to happen - including a restructuring of governance - that are all unlikely soon.

The focus on alleviation is really the key, because it allows certain things to be done in the short term, even while the lasting solutions appear far away. In Bangalore, the Additional Commissioner of Police (Traffic), M N Reddi, proposed a simple way of understanding alleviation. "People do not willingly drive into crowded intersections," he says, "they simply show up there not knowing that it is already crowded, and this makes the problem worse than it was. Of course, for some journeys, there are no alternate paths, but even in those cases, there might be alternate times possible. In a lot of situations, people would choose to go by a different route or at a different time, if only they had the information to make those choices."

So we decided to begin from there. What are some of the questions that road users have? Here is a short list: What is the shortest route for the journey I am about to take? Are any of the key intersections along this route blocked? What are my choices, if I want to avoid the congestion? Is anyone else going that way, that I can ride with? Is there a convenient bus route for this journey?

These, and other questions together lead to a straightforward conclusion - what we need is a comprehensive real-time traffic monitoring system, and a dissemination platform for the information that is gathered. The value of such information, for administrators as well as road users, is unquestionable, which is one reason why so many people tune in to, and even voluntarily send SMS alerts to radio stations with information about traffic conditions. 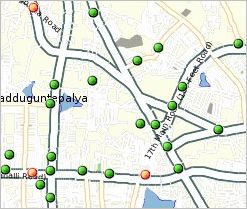 A snapshot of live traffic information along arterial roads in a part of Bangalore. Pic: Mapunity.

On mobile phones, BTIS is currently available through a shortcode - 54321 - to Airtel customers.

Other telecom companies have been invited to provide the service to their customers as well.

How does one collect traffic information in real-time? If you're the traffic police and constrained by many other factors, you try to see how much of this can be accomplished by information technology. This is particularly ironic - since IT is usually blamed for the chaotic and rapid growth of the city. But an interesting benefit of this growth is that the city is full of talented engineers who could apply their skills to governance problems too, if the right environment for nurturing their work could be created and sustained.

Around this time last year, the Additional Commissioner wondered whether, with the growing numbers of cell phone users in the city, it might be possible to use real-time data from cell phone service providers to track congestion. This is based on the idea that congestion is the presence of numerous people in a particular location, and if nearly everyone has a phone, then the presence of phones could be a useful proxy for the presence of people. Sometime last summer, The New York Times carried a long article about this, and a few European countries were experimenting with the technology for monitoring highway traffic. We recognised also that if cell phone logs could be harnessed, it would be particularly advantageous, since the same cell phone companies providing the input data could then be relied upon to deliver traffic information to the residents too.

One or two of the international companies expressed an interest in developing a solution for Bangalore, but after a few weeks of brainstorming, it was decided that we would try to build a solution ourselves. I was then in the process of leaving my job, and along with two friends starting up a social venture named Mapunity, to address the spatial information needs of various government departments and public affairs groups. Traffic information is a very good example of such a need - it's very difficult to manage a network problem like traffic unless one can visualise it first - and we decided to take this up among our first projects.

The Commissioner and I proposed the idea to Airtel, the largest mobile telecom service provider, and the CEO, Deepak Mehrotra readily agreed. There was also a congruent interest in the problem for Airtel - mobile calls are likelier to be dropped when too many people arrive at an intersection, as the towers that carry voice traffic become over-burdened. Airtel was already investigating the use of 'micro' towers - with a limited footprint, to serve a very local area such as a traffic intersection. Together, the police, Mapunity and Airtel conducted a pilot study, installing 11 towers at key intersections on two arterial roads leading to the airport. Airtel also created the infrastructure to download and host its entire Bangalore data, and Mapunity created the analytical and predictive algorithms for traffic based on this data.

The pilot project demonstrated the potential to create a city-wide real-time traffic information system, and this was shown to city officials in late December last year. It was agreed that micro towers would be installed by Airtel city-wide to monitor traffic at junctions manned by the police, and at other pain points for traffic. On 1 June, this year, the Bangalore Transport Information System (BTIS) was formally presented to the city.

Broadly, there are three ways in which information is available to citizens. At the BTIS web site (www.btis.in) you can check current traffic, look for directions, find the most accident-prone locations, find carpool partners, etc. All this information is also retrievable on mobile phones, using a querying system that has been developed. A simple query, using codes for various neighbourhoods, allows people to find traffic conditions along travel routes. (e.g. BTIS MGRD ARPT will tell you about traffic between Mahatma Gandhi Road and the Bangalore Airport). The codes themselves can be found on the phone system itself. Airtel has made a shortcode number - 54321 - available for this system, and other operators have been invited to provide the same number too.

In parallel to all the other things we want from government - accountability, transparency, integrity - we must also develop a road-map for increasing the capacity of public servants to solve complex problems in administration.

Without this, even good officials cannot meet our expectations. BTIS has provided a first-hand opportunity to understand the problems in capacity-building.

There are many possible additional developments. For instance, we are developing a bus passenger information system that will tell you where your bus is, so that you don't have to waste time waiting at the bus stop while you could be at home or work instead. Similarly, we are looking at analysing cell phone records to develop an Origin-Destination matrix that would be very helpful in planning public transport. Typically, this is now done by field surveys and takes several months even to compile a small sample, whereas cell phone analysis can perform this using millions of records in days.

The system is only a beginning in the challenge to tackle our growing traffic problems, but at least for the time we now have the ability to collect traffic information in real-time and make it available to road users. Fundamentally, the challenge of traffic and transport management in the city  or for that matter, any of our large cities  is not merely to create more infrastructure in the form of wider roads, underpasses and flyovers. The more powerful way to tackle the problem is through analysis of the patterns of road use, and through the creation of transport services based on them. Our hope is that gathering and presenting traffic information through an urban transport information system can be an important first step in that direction.

Ashwin Mahesh is a co-founder and editor at India Together, and the head of Mapunity Information Services, which created the technology behind the Bangalore Transport Information System.

URL for this article
http://indiatogether.org/btis-op-ed