India's most widely read historian, Ramchandra Guha rightly praises Madhusree Mukerjee's book, Churchill's Secret War: The British Empire and the Ravaging of India during World War II as "a major contribution to Indian history and to history of the Second World War." The author has convincingly laid the blame for the Bengal famine and the resulting three million deaths at Churchill's door.

Her thesis is that 'Churchill and his advisers chose to use the resources of India to wage war against Germany and Japan, causing scarcity and inflation in the colony' that led to 1.5 million deaths by the official account. The 'deprivation and anarchy of the fractious era had torn the fabric of its society', enabling the 'divide and rule' policy that eventuated over time in the mutually antagonistic nations, India, Pakistan and Bangladesh.

The author begins the work with the establishment of the British in Bengal, with Robert Clive's takeover in 1757. The first famine among a series that reduced India's prosperity to dependence on British rule was in 1770. Clive, who was once a clerk, returned to become the richest man in Britain. Though a member of the House of Commons, he was tried for corruption but absolved of charges of retaining gifts that were the property of the company. His life befittingly ended in suicide. 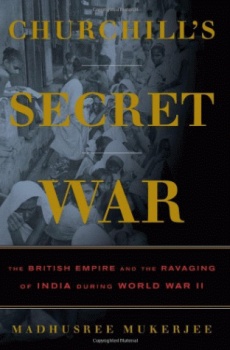 Fearing the war coming to India's doorstep on losing Burma, a 'scorched earth' policy was embarked on. Provisions such as rice, transport facilities were removed from coastal Bengal, lest they be acquired by the Japanese who were expected to arrive by sea.

Over forty rebellions rocked India over the next hundred years till the anniversary of the hundredth battle of Plassey when central and northern India erupted. The Bengal Army being at the center of the 'Sepoy Mutiny, policies were put in place by the Crown that took over India to keep the Bengali 'babus' in check. Later the province was divided along linguistic and religious lines and the capital shifted out of Calcutta to Delhi. The Viceroy's taking of the colony into World War II without consulting the Congress governments in power set the stage for the famine.

Fearing the war coming to India's doorstep on losing Burma, a 'scorched earth' policy was embarked on. Provisions such as rice, transport facilities were removed from coastal Bengal, lest they be acquired by the Japanese who were expected to arrive by sea. The Quit India movement, diversion of resources to the Indian Army fighting in far away theatres around the Mediterranean Sea, printing of money to pay for the purchases and an untimely cyclone conspired to bring on the famine. With the Subhash Bose-led Indian National Army at the gates, insurgents in Bengal preparing to welcome him, and patriots responding to Gandhi's call of 'Quit India', Churchill was called upon to 'make a choice that would tilt the balance between life and death for millions: whether or not to expend valuable wheat and shipping space on providing famine relief to Bengalis.'

The book's contribution lies in establishing the link between Churchill's decisions on this score and his worldview. The author shows that Leopold Amery, Secretary of State for India, and the Viceroy, Wavell, attempted to respond to the famine, but were stymied by a combination of Churchill and his adviser, Lindemann, who achieved peerage as Lord Cherwell. Mukerjee writes, 'If the United Kingdom had an Achilles' heel, it was the stomach.' Having experienced temporary shortages due to German U Boat action in the First World War, the British created stocks to last three months.

Churchill appointed Lindemann to watch over the feeding of Britons. Lindemann, as head of S (Statistics) branch, also prioritised the logistical machinery of warfare. Thus, he was to advise on the utilisation of shipping resources available and lent by the United States, between the equally compelling civil and military demands. Mukerjee makes that case that the ideas of eugenics that Lord Cherwell propounded and the racism these spelt influenced his judgment. While shipping resources were available, these were not diverted to save Bengalis by being deployed to import rice from Australia and elsewhere.

This was in consonance with Churchill's own perverse thinking, expressed in typical Churchillian prose as recorded by Amery in his diaries. An example of Churchill's thinking on colonies and their inhabitants, is recorded by Amery thus, '(Churchill) came very near to suggesting that we really could not let Indian starvation or multiplying too fast interfere with operations.'

The author competently goes into tonnages of shipping, the alternative demands such as the supposed need for creating stockpiles in case the Balkans were liberated, and the rice and wheat that could have been brought in to mitigate the food crisis of 1943 to demolish the view that the famine was yet another work of nature. It was essentially man made, brought on by decisions taken by figures imbued with a racist mentality. Interestingly, Churchill was in the midst of a fight with Hitler, an extremist on this score.

The author's description of the famine is blood curdling. It is a heartening that the democracy has ensured that such a predicament has not recurred in India, even if malnutrition persists as reminder of India's underdevelopment despite its aspiration for double digit growth rate figures. The author taps the experiences of survivors of the famine, now in the twilight of their lives. Their stories of rural strife and urban horrors of the period make a riveting reading in the two chapters In the village and On the street respectively.

The author weaves into the narrative the fallout of the Quit India movement at the local level in the form of a micro nationalist revolt under the local leader Dhara in Tamluk. She leaves the question unanswered as to why the people did not rebel, did not fight for taking over horded stocks. In his review of the book in Outlook, to these Swapan Dasgupta adds another: why the famine never became a pan-Indian issue. His suggestive parting line is that "Mukerjee's nationalist narrative dosen't provide the answers but they suggest awkward possibilities."

URL for this article
http://indiatogether.org/churchill-op-ed