OPINION: SECULARISM
The beauty of compromise
An excess of secularism may be as problematic as bigotry, whereas pragmatism is in salutary contrast to both of those, writes Ramachandra Guha.
10 October 2009 -

In September 2004, the French government formally banned the wearing of headscarves by Muslim girls in schools and colleges run by the State. The decision was opposed by most French Muslims, but supported by an overwhelming majority of the citizens as a whole. The tradition of French republicanism is robustly secular; against King and Church in equal measure. Any sign of religious affiliation in public institutions is frowned upon.

The French authorities imposed the ban for two main reasons. The first argument they made was on the basis of gender justice. They claimed that the headscarf was a sign of women's subordination within the home and the family. The second argument rested on the case for assimilation. The headscarf marked the wearer out as Muslim, and hence something foreign and alien to the culture of the French nation.

But it was evident all along that the particular target of the ban was Muslims. There had, in recent decades, been substantial immigration of Muslims from North Africa. The new migrants tended to live in separate neighbourhoods, limiting their interactions with the host population to the workplace. This ghettoization was deemed bad for them, and bad for French culture as a whole. The ban on the headscarf was very clearly an attempt to hasten them into the mainstream.

Reading of the controversy in France, I felt at the time that a ban could be counter-productive, encouraging parents to withdraw girls from State-run schools and send them to religious schools instead (or educate them at home). In any case, I thought, it was an odd form of nationalism (or secularism) which insisted that all citizens must, apart from speaking the same language and swearing allegiance to the same flag, also dress exactly alike. So long as an artefact of clothing is not offensive (which a headscarf or turban clearly isn't) and can be worn alongside a regular school uniform (as a headscarf and a turban clearly can) there seemed to be no real reason to forbid a student from wearing it. 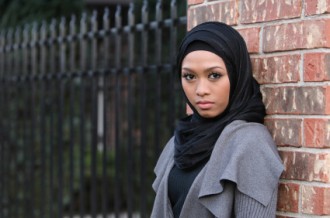 In France, the scarf is seen by the State as oppressive, and hence banned in public. In India, the scarf is actually liberating. It permits young women to acquire a university education denied to their mothers and grandmothers.

The question of whether or not to allow the headscarf in schools and colleges is also hotly debated in some other countries, such as Turkey (as discussed in Orhan Pamuk's memorable novel, Snow). In France itself, after imposing the ban in schools, the authorities appear to have - with or without the pretext of the law - extended it to other spheres as well. An essay in The Guardian reports that women wearing headscarves in France have been forbidden to vote, not allowed to open bank accounts, and in some cases, even barred from their own wedding ceremonies! A French businesswoman of Muslim origin, wearing a scarf along with her suit, went for a holiday with her family, only to be turned away by the apartment into which they had been booked on the grounds that she was sporting "an instrument of women's submission and oppression".

A human rights activist observes of these cases that "this is clear discrimination by people who wrongly use the school law to claim that France is a secular state that doesn't allow headscarves in public places". A history professor involved in the 'French Collective against Islamophobia' remarked (in terms that would be very recognizable to Indians) that "what people have to understand is that the concept of French secularism is not anti-religion per se, it is supposed to be about respecting all religions".

In January 2005, some months after the French imposed their ban, I was speaking at the University of Calicut. The university is located in the district of Mallapuram, which is one of the handful of Muslim majority districts in India outside the Kashmir Valley (the others lie along the West Bengal-Bangladesh border). The Kerala Muslims, known locally as Mapillas, were converted not by the sword but by trade and commerce. They date to at least the eighth century AD, and have (in all senses) a substantial presence in the state, with particular influence in business and politics. Where Muslims in some other southern states claim Urdu as their mother tongue, the Mapillas have a deep identification with the language of Kerala, Malayalam. (Arguably the greatest Malayalam novelist was a Mapilla, Vaikom Muhammad Bashir).

My talk at the University of Calicut was held in a gloomy auditorium, but the composition of the audience lit up the event for me. For, of those who attended the lecture at least half were women. This was not in itself surprising, since rates of female literacy in Kerala are close to 100 per cent. What was especially notable was that most of these women (or young girls) were Muslim, their faith marked out for me by the black headscarf they wore, the self-same headscarf that had just been forbidden in schools in France.

In that old Western democracy, the scarf was seen by the State as oppressive, and hence banned in public. In this new Eastern nation, the scarf was actually liberating. It permitted these girls to acquire a university education denied to their mothers and grandmothers. For the scarf denoted a certain propriety and modesty; by wearing it, these girls could reassure their parents that they were going to college to study rather than to socialize with members of the other sex.

In Calicut, the headscarf is acceptable, but a few hundred miles up the west coast of India, it apparently is not. Thus, in recent months, some colleges in the district of Mangalore have forbidden its use. Mangalore is a stronghold of Hindutva organizations, which have been emboldened by the coming to power in Karnataka of the Bharatiya Janata Party. Earlier in the year, they attacked girls for going to pubs; now, they seek to prevent girls who wear headscarves from attending college. In the first case, they protested against an alleged scantiness of clothing; in the second case, against an alleged excess of clothing. Any stick is apparently good enough, so long as it can be used to intimidate the minorities.

It is necessary to make some distinctions here. The burqa, or full veil, is oppressive and demeaning: by hiding a woman's face and eyes, it marks her out as subordinate to (and under the control of) men. But to cover only one's head is another matter. In India, at any rate, the practice is not restricted to Muslim women. Hindu women often cover their heads with their saris, whether to keep out the sun, enter a temple, or convey respect to elders. Sikh men and boys are obliged by their faith to wear a turban, while many Hindu and Muslim peasants voluntarily wear one. Had their students appeared before them in a burqa, some teachers in Calicut University might have been embarrassed or offended; clad as they were, no one in the university, whether teacher, student or staff, could in any way have seen it as other than normal and wholly acceptable.

For me, the ubiquity of the headscarf in Calicut University is a perfect illustration of what Mahatma Gandhi liked to call "the beauty of compromise". The pragmatism of the Malayali stands in salutary contrast both to the thoroughgoing secularism of the French and to the narrow bigotry of the Hindutva-wadis.

URL for this article
http://indiatogether.org/compro-op-ed