Urban microcredit : The current scenario
From Urban Poverty Alleviation Initiatives in India : A General Assessment and a Particular Perspective (2002), a publication of the Ramanathan Foundation.
01 October 2003 -

Microcredit as an intervention strategy has been extremely successful around the world and in the rural areas of India. NGOs around the world have led the campaign to expand banking services to the poor. There are many successful examples of microcredit programmes in rural India, but few have had a specific focus on urban India. In other countries urban programmes have often started as NGO-led efforts and later spun-off to become Microfinance Institutions.

One problem with urban microcredit programmes is that they focus too-narrowly on self-employment. This too may be an outgrowth of the success of microcredit in rural areas. Self-employment is a logical path in a less populated, non-industrialised rural area. But urban areas offer population concentrations that can support industry and organised employment. According to Mahajan, while it may be true that some poor people do want to be self-employed, a majority of poor people, particularly the poorest want steady wage-employment. Also, initial investment costs, seed money requirements and real estate costs are relatively higher in urban areas, making self-employment a less lucrative option. Wage labour should be further explored rather than burdening the poor with the extra responsibilities of self employment.

Additionally, the poor need credit for uses beyond income-generating production just like every other segment of the population. But urban programmes have been hesitant to get into this line of business directly, fearing the poor cannot repay. This fear of non-repayment has resulted in the design of programmes that give loans only when the capital is used to generate repayment capacity directly. But the uses for loans borrowed by the urban poor vary widely and include more reasons than income generation. The Paradigm Group study found that credit taken in slums was most often for health, social ceremonies such as marriages and housing. 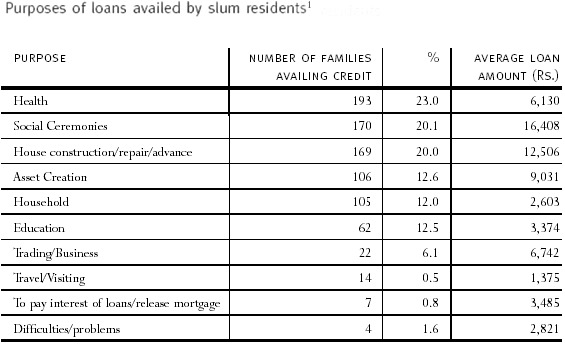 Indian experiences of urban microcredit are relatively limited compared to those around the world. One well-known example is the SEWA Bank. The SEWA Bank opened in 1974, to provide banking services to the Self Employed Womens Associations trade union members in Ahmedabad, when it was discovered that linking them to nationalised banks was not working well. It was intended to operate as a cooperative bank, owned by its members. All of SEWA Banks clients are self-employed women. The bank offers them varied services including savings, secured loans, unsecured loans and several types of insurance.

SEWA Bank pioneered Doorstep Banking in 1978, when its first mobile van travelled to areas of high customer concentration, to facilitate cash collection. Today two mobile vans cover the city daily, with an average collection of Rs.10,000 to Rs.15,000 each per day. The normal pattern of lending is to first help women repay high interest debts owed to private lenders. Then, loans are granted for working capital. Next, disbursements are made for purchasing equipment instead of paying high rent. The service then provides financial counselling and finally extends loans to finance mortgages and other personal assets.

The table below shows that SEWA Bank has been particularly successful in attracting members and mobilizing deposits. SEWA has been advancing loans to women involved in various trades like block printing, handloom weaving, embroidery, fish and vegetable vending, etc. SEWA has been able to empower them to improve their skills, income and self-esteem. 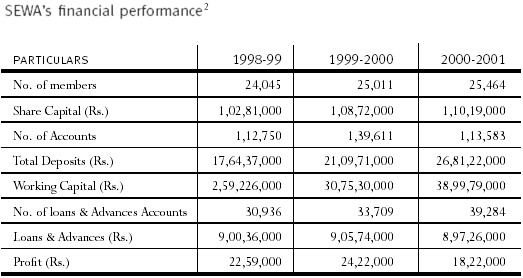 What is noteworthy is that though SEWAs initial intervention and core-competence was credit, it has been able to extend its role beyond that parameter and take on what government initiatives like Special Nutrition Programme, Child Survival and Safe Motherhood Programme or Universal Immunisation Programme were meant to accomplish. SEWAs hands-on experience with urban poor women encouraged it to address other visible and not-so-visible needs like health, child-care, confidence and self-esteem. When SEWA found that the maternal mortality rate was high among its members because of inadequate medical attention, it started a maternal protection scheme in which, as soon as a woman became pregnant, she would be registered on payment of Rs 15. In return, SEWA would introduce her to an appropriate local prenatal service, give a stipend of Rs.100 and a kilo of ghee, considered energising for the mother. Eventually, this scheme was adopted by the Gujarat state government and implemented through its Labour Ministry.

Likewise there are other instances where SEWA started programmes or centres have outpaced similar equivalents run by the government or have run as parts of government sponsored schemes, making them work for the poor. Again, the key point is that though standalone schemes exist in the governments UPAIs, they are neither as successful nor as cost-effective.

Also, the collective strength of SEWA members has helped them fight policemen extorting bribes from vendors, get minimum wages and negotiate with the government to procure contracts for supplying raw material being produced by SEWA members. Solidarity among urban microcredit group members can help them solve many of their common problems of security, drinking water, sanitation, sewerage, etc. effectively.

Another urban microcredit programme in India is the Sanghamithra Urban (SU) Programme, which is administered by the Bangalore branch office of the Sanghamithra Rural Financial Services, headquartered in Mysore. SUs vision is to enable the urban poor anywhere in India have access to, control over and skills in the management of money, as an engine to sustainable livelihood platforms. SU has been using a group-lending model to deliver credit in Bangalore slums since October 2000. It partners with local NGOs who form Self-Help Affinity Groups and provide training directly to its members. These partner NGOs are given financial support, as a low-cost method of building capacity in groups, which Sanghamithra believes is crucial in reducing poverty.

Contrary to typical urban programmes, training is not aimed at increasing job skills alone, but at building peoples institutions. Its loans are not for micro-enterprises directly, but for any purpose the group deems appropriate, which includes self-employment as well as social ceremonies and household consumption. Administrative charges are 24% to cover the cost of serving the poor where they live, rather than making the poor come to SU.

SUs also offers a Group Education Loan. This first made to a group of parents whose children joined a small private school near home, after dropping out of a government school. Many of the parents had taken credit from moneylenders to pay school fees and saw the opportunity to borrow from SU as a relief from the high rates the informal lenders were charging them. They were jointly responsible for individual loans. Although it is too soon to analyse SUs operational and financial self-sufficiency, one performance indicator of interest is that its repayment rate is 100%. Contrary to popular belief in India that the urban poor are bad credit risks because they are often migrants and hard to trace, this sample of the urban poor have exemplary credit records with SU. This may prove to be due to their own sense of obligation, focus on the long term and continued access to credit, or due to the personal relationships between the groups and the NGOs and the groups and SU.

Unlike the formal banking system though, SEWA and SU are not focusing on income generation solely. But, both institutions are guided by the tenets of long term financial self-sustainability. SEWA recognises the empowerment possible through the Self-Help Groups when they are taught how to manage their finances and allowed to make their own business decisions. SU takes this a step further by allowing Self-Help Affinity Group members to act as a loan committee and sanction individual loans for any purpose they deem valid. The central government does recognize the need for consumption microcredit and this is evidenced by the support for Thrift and Credit Societies under recently launched schemes such as the SJSRY, where female members can obtain loans for purposes not covered under self employment schemes.

What is missing is a national institution -- an apex bank for urban development -- responsible for really pushing the partnership of urban microcredit and self-help across Indias cities.

The urban poor are indeed borrowing for uses that are covered by the Governments UPAIs, such as housing, health, child-care and education. But the fact that NGO led microcredit schemes have succeeded where government schemes have failed is a recognition that the formers programmes have been better at addressing the problems. The success of NGO experiences show that the poor are bankable. It illustrates that microcredit can be used as a core instrument of empowerment for the urban poor. When used in conjunction with other programmes, it actually serves to improve the quality of life of the urban poor. The method of administration of this credit also plays a role in its effectiveness.

However interventions by NGOs in themselves are too small to make a significant difference in the national context. While there is a national policy to support priority sector lending and some schemes have begun to partner credit with training and group action, what is missing is a national institution responsible for really pushing the partnership of urban microcredit and self-help across Indias cities. A very important step towards making credit the core component is the creation of an Apex Bank for Urban Development. An apex banks role could be to act as a nodal national-level agency for urban microcredit, learning in part from the success of NABARDs experience in rural micro-credit.

URL for this article
http://indiatogether.org/credscene-poverty