ESTIMATING POVERTY
How is India doing?
Why is there a huge discrepancy between official calculations of poverty and the alternative figures arrived at by many scholars as well as development agencies, asks Prahlad Shekhawat.
10 July 2011 -

It is no secret that India is doing quite poorly on a number of development counts. According to the Human Development Report, India languishes at 126th rank out of 177 countries. The International Food Policy Research Institute's Global Hunger Index ranks India 94th out of 118 countries surveyed. The World Food Programme estimates half of our children suffer from severe or moderate malnourishment. Sixty seven out of 1000 thousand children born in India die before the age of five. Despite a national policy for compulsory primary education, only 50 per cent of children have access to proper education.

And even these appalling numbers are often generous figures, quite far from the truth!

Thandika Mkandawire, director of the UN Research Institute for Social Development says that the Indian government's claims of poverty reduction are not reliable; he notes "... Indian data is always controversial". Professor Brij Kothari of IIM Ahmedabad maintains that the 65.4 percent literacy rate published by the 2001 census is highly exaggerated (the preliminary numbers from the 2011 are even higher!), and not based on proper evaluation of the children's ability to read and write. Millions of those classified as 'literate' cannot actually read, his study found.

The World Bank organised a seminar of selected economists, all of whom wrote papers claiming that poverty in India had come down from 36 per cent to 22 per cent. This was published in a special report of the Economic and Political Weekly. This conclusion was widely criticised.

The most significant criticism came from Professor Utsa Patnaik of Jawaharlal Nehru University, in her article, The Republic of Hunger. On the basis of the National Sample Survey data on calorie intake for 1999-2000, Professor Patnaik found that 70 per cent of the Indian population was at or below the poverty line fixed by the Planning Commission in 1979 - 2400 calories per person per day. She also calculated that an average family of five was consuming at least 200 kg of grain less each year than 50 years ago. Food grains were available, but the poor did not have the money to purchase them.

The World Bank's own estimate of poverty in 2007 has been radically revised by new cost of living data which draws the new poverty line at 1.25 dollars at 2005 purchasing power parity. On this basis a shocking 41.6 per cent of India's population - or 456 million people - live below the poverty line, notes Professor Raghav Gaiha. This is about one third of the world's poor population. Even this World Bank data is an underestimate because it does not adequately cover the rural areas where the vast majority of the poor live.

The National Commission for Enterprises in the Unorganised Sector recently declared that 836 million Indians remain marginalised. The Commission's Chairman Arjun Sengupta says an overwhelming 79 per cent of workers in the unorganised sector live on an income of less than Rs.20 a day. 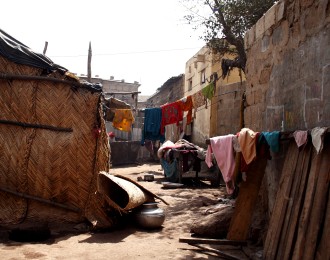 By the statistical jugglery of falsely lowering the poverty line, India is trying to sweep the poor under the carpet.

The Commission's recent report, entitled Report on the Conditions of Work and Promotion of Livelihoods in the Unorganised Sector says that over 394.9 million workers (86 per cent of the working population) belong to the unorganised sector and work under "utterly deplorable" conditions with "extremely few livelihood options". The Commission's data is based on National Sample Survey (NSS) studies. The NSS researches its data meticulously at the regional, district and provincial levels. Going by its statistics, it was found that while 235 million people are in a position to take care of themselves, an unbelievable 836 million people, or 77 per cent of the population, require assistance.

At a recent conference on Human Development and Capabilities in Delhi, Dr Montek Singh Deputy Chairman of the Planning Commission claimed that a survey done by one of his advisers showed that the poverty alleviation in India is better than indicated even by the official government figures. The Planning Commission has accepted the Tendulkar Committee report which says that 37 per cent of people in India live below the poverty line. This arbitrary method based on an income of 20 rupees per day has been widely disputed.

India wants to be a globally respected as a world power but refuses to apply global standards of calculating poverty which should at least be in line with the World Bank criterion of 1.25 dollars per day.

There is an urgent need to agree on some objective criteria by which to ascertain the number of those in the Below-Poverty-Line (BPL) category. The Multidimensional Poverty Indicators developed by the Oxford Poverty and Human Development Initiative and applied by the Human Development Index (HDI) 2010, are perhaps the most reliable measures developed so far. They include: Years of Schooling, Child enrolment, Mortality (any age), Nutrition, Electricity, Sanitation, Drinking Water, Floor, Cooking Fuel, Asset Ownership. Each of these indicators is given due weight. The new Inequality Index as deployed in the HDI further elaborates the nature of disparities and shocking poorness of the poor in relation to the richness of the rich.

These indicators are worth accepting by the Planning Commission and the government of India, because firstly they have been applied by an independent international agency, and secondly because they are comprehensive measures which can either form a single index or can be disaggregated into separate dimensions. The advantage is that the policy makers can learn about which dimension or dimensions is/are most responsible for poverty and therefore need special attention.

Such a measure will be in line with globally acceptable standards of poverty calculation. These indicators can overcome the shortcomings of the outmoded, arbitrary and one sided method of calculating poverty by consumption of a certain number of calories or by relying on reported income.

Why is there such a huge discrepancy between official calculations and the alternative figures arrived at by many Indian scholars and agencies as well as by international agencies? Why are not all relevant data collected (for example about child labour)? Is there not a need for data collection and evaluation by independent research organizations especially because data have to be interpreted? Don't we need to change the whole basis of calculating poverty line and bring it in line with accepted international standards?

These are significant questions, on which a national debate should occur, if we really want to know how India is doing. Without this, nearly all our understanding is guesswork at best, and our relief measures are doomed from the very beginning.

Prahlad Shekhawat is Director of the Alternative Development Center, in Jaipur.

URL for this article
http://indiatogether.org/data-poverty