Defence or development?
Colonel Pavan Nair studies the allocations for defence and development efforts, and asks what's needed to reach even the modest standards of Brazil or Sri Lanka.
01 May 2004 -

India ranks 11th in the 2002 list of major spenders on defence, spending US $12.9 billion, ahead of Russia at $11.4 billion. India's world ranking in the United Nations Development Program's Human Development Index (HDI) is 124 out of 174. Clearly, military prowess isn't helping the poorest people in the country advance very much economically. Development experts have argued repeatedly that some of the funding now 'wasted' on militarization should instead be spent on development, but the other side has argued that security is a legitimate concern too, and spending on that cannot be scaled back.

Can expenditure on defence be evaluated in relation to the expenditure on development, with a view to evolving a model which can indicate threshold levels for both? If we can do that, the levels can be used by planners as a guideline to improve the human condition, while at the same time assuring the necessary level of security. The aim of military spending should be to improve the strategic and security environment for the benefit of the citizen and the state, and is therefore not contrary to the aim of social spending.

Expressing defence spending as a percentage of government expenditure can be misleading. India spends 14% of its budget on defence, but if we exclude the compulsory parts (paying off debts), then 44% of the discretionary spending is on defence.  •  A new security agenda

Now let us define developmental expenditure. When poverty alleviation is a priority, it would be relevant to include any expenditure which will improve the Human Development Index (as defined by the UNDP) as expenditure on development. The three major components of the HDI are life expectancy, literacy and income; each of which is measured by several parameters. Therefore, the following could be included. Health and family welfare, Education, Rural and Urban Development, Housing, Water supply, Sanitation, Social justice and Agriculture. Though subsidies may be counterproductive economically, these have been included as they benefit lower income groups. What is not included is Industry, Power, Roads, Railways and other infrastructure like telecommunications. While these are developmental in nature, they also generate revenue for the state.

Table 1 shows the head wise plan expenditure on development in India during 2002-2003 and the amount budgeted for 2003-2004 (Sources, Statistical Outline for India 2003-2004, Tata Services Limited, indiabudget.nic.in) The consolidated State outlay for these heads has been included separately. Comparisons to defence expenditure are shown in red font. 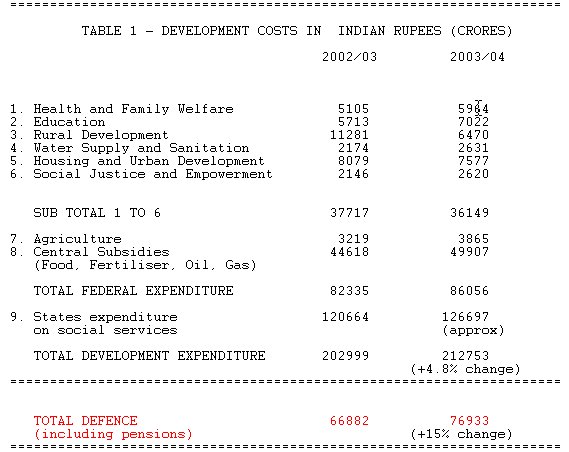 The Rs.213,000 crores spent on a population of 1.05 billion translates to Rs.2,028 per citizen, to put things in per capita terms. Let's call this figure DevX. Similarly, the Rs.77,000 crores spent on defence translates to Rs.733 per ciizen. Let us call this expenditure the Defence Expenditure Index (DefX). With these two figures now available, we can look at the Development-to-Defence Ratio (DDR), which tells us how much is being spent on defence vis-a-vis per citizen on development. The current DDR is about 2.77, approximately. That is, we spend 2.77 times as much on development as we do on defence.

Is that good? Since the great majority of the Indian people live in difficult conditions, it follows that this ratio of development-to-defence spending is too low. To understand this further, let us look at development measures for nations that are a little better developed than India. We could benchmark our DDR to the Human Development Indices of these nations - Argentina, Mexico, Brazil, and Sri Lanka - and use that as a target that can be realised over a period of time. HDI figures for these nations are shown below.

The average HDI value for these countries is 0.784, whereas 124th-ranked India is at 0.577. If we use Argentina, Mexico, Brazil and Sri Lanka as ideal (these are still poor in comparison to development standards in the rich nations, but perhaps these represent a more likely goal from India's grossly low rank), then using their HDI of 0.784 as a benchmark, we can calculate an Ideal Development-to-Defence Ratio (IdealDDR) for India. I.e. we can ask - how should our DDR be altered, if we are to have the same HDI values as these countries? By a straightforward calculation [I used the equation IdealDDR = DDR + DDR*( 0.784 - HDI)/HDI], we see that India's DDR value should be a full point higher, at 3.76, to meet this goal.

This can happen in several ways. We can simply transfer 21% of the money we now spend on defence to development instead, and this would achieve the objective immediately. Alternately, we can grow our development spending faster than defence spending, or cut back defence spending gradually. Which of these options - or other ones - we actually will or should take, is debatable. But this calculation shows that we're at least 21% out of sync, even if we set the limited objective of reaching the standards of these still-developing nations. Pakistan would need to switch an even higher share of its spending priorities from defence to development to achieve the same effect.

We have already long passed the minimum threshold level of expenditure needed for defence, but are still well short of a similar threshold for development. Budgeting for development is a trade-off between guns and livelihoods.

An important question to consider is whether expenditure for development must necessarily come from defence, or whether other sources can be tapped. India's fiscal deficit is already very high, so additional borrowing would not be a healthy option, so the money really has to come from within the existing budget through changes in allocation. Defence spending is the largest part of our discretionary expenditure, so it's the most obvious place to look. Most importantly, we have already long passed the minimum threshold level of expenditure needed for defence, but are still well short of a similar threshold for development. Budgeting for development, therefore, really is a trade-off between guns and livelihoods.

All governments bear the responsibility for determining spending priorities, India's is no different. This sort of calculation allows us to judge our governments' commitment to developing India, by looking at the resources they actually allocate for various areas. In 2003, India slipped further to 127 in the Human Development Index, at a time when the economy grew in great strides. One might say, it's indefensible.

URL for this article
http://indiatogether.org/ddratio-economy