Defence budget leaves out Rs 26,000 crores
India currently does not count the costs of defence pensions, para military forces and the defence ministry itself as part of budgeted defence expenditure. Correcting for this and converting to purchasing power terms, we are the third largest spender on defence in the world next only to the US and China, writes Pavan Nair.
18 May 2005 -

What constitutes military expenditure? Governments tend to split total expenditure under different heads to show lower costs. The Eleventh Finance Commission laid a limit of 3% of the GDP towards the aggregate cost of defence. This limit has been crossed by a full percentage point if we include defence related costs which currently do not form part of the defence budget.

The Stockholm International Peace Research Institute (SIPRI, www.sipri.org) defines military expenditure to include all current and capital expenditure on the armed forces, including peace keeping forces, defence ministries and other government agencies engaged in defence projects, paramilitary forces when judged to be trained, equipped and available for military operations and military space activities. According to SIPRI, expenditures on current personnel, military and civil, retirement pensions of military personnel, social services for military personnel and their families, operations and maintenance, procurement, military research and development, military construction, military aid (in the expenditures of the donor country), must all be categorised as defence expenditure.

The SIPRI definition has been widely accepted including USA, NATO and the European Union. Another aspect of military expenditure not spelt out in the SIPRI definition above, is the cost of strategic or nuclear forces since they form part of the armed forces. All major nuclear powers including China have accepted this as a defence cost. The International Institute of Strategic Studies, London (IISS) also subscribes to the view that nuclear expenditure is a defence cost.

Stepping outside of accepted practices, India currently does not count the costs of defence pensions, para military forces and the defence ministry itself as part of budgeted defence expenditure.  •  Defence or development?
•  Common minimal budgeting

India excludes the cost of defence pensions, para military forces and the defence ministry from budgeted defence expenditure. Should these costs form part of aggregate defence expenditure (DE) even if paid from other heads? India has excluded Defence pensions from DE since 1985. Pakistan has followed India's example since 2000. Defence pensions alone (nearly Rs 12,500 crores) would hike the cost of defence by 15%. Also, nuclear deterrence and border management in war and peace are vital aspects of national security, but are not reflected in the Indian defence budget. (1 crore = 10 million)

The budget process in India is fairly transparent and details are accessible from a website specially constructed for this purpose (indiabudget.nic.in). The non plan portion of the Expenditure Budget reveals details of security related expenditure that is excluded from the defence budget. Taking those costs into account, the total cost of defence is summarised in the table below: 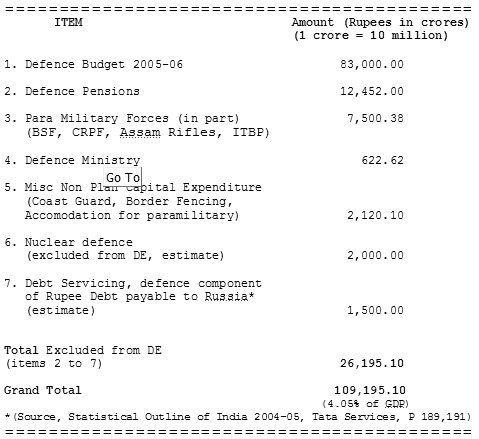 SIPRI points out that DE should be assessed in purchasing power parity (PPP) values and not market exchange rates (MERs). The institute says that international comparisons of military expenditure made by use of MERs tend to understate the purchasing power of the military budgets of developing countries and countries in transition. PPP converted military expenditure figures are the more relevant indicator, according to SIPRI, because they measure the civilian resources foregone by allocating government expenditure to the military sector.

SIPRI publishes the rankings of nations in MER and PPP rates. Using MER to count defence spending, India stands at number 11 in the world, just ahead of Russia and behind South Korea. But using PPP and the total cost of defence for 2005-6, India has joined the hundred billion club at $120 bn next only to the US at $450 bn and approaching China at $150 bn. Russia is a poor fourth at $65 bn followed by France at $40 bn and the UK at $35 bn.

Even the Central Government's Rs 83,000 crores level of defence expenditure results in just over a hundred billion dollars in PPP terms. SIPRI says that the higher ranking for China and India "indicates that the amount of non military purchases foregone is greater than MER-converted military expenditure data suggest."

A secure environment is vital for economic and human development. But it is also essential for civil society to get a view of the total costs of defence expenditure, not merely the numbers that the central government is tabulating under current budgetary practices. More accurate figures for the totals costs must inform the debate on the proportions of military expenditure and development spending in our country.

URL for this article
http://indiatogether.org/defcosts-government