It will require a change in the DNA and design of the city for a reduction in the number of rapes in Delhi. Addressing the structural problems of Delhi is a critical component of improving the situation, argues Jacob John.

For weeks now, there has been justifiable public anger over the rape of a para medical student in Delhi and her subsequent death from brutal injuries inflicted on her by the attackers. There are countless calls for the perpetrators to be hanged. Two of the accused having even reportedly agreed that they be given the death penalty.

Others feel that greater conviction rates in rape cases will certainly help to bring down incidents in the national capital. Public and visible punishment are the key elements of this strategy. However, what makes Delhi the rape capital with the total number of cases at 572 far exceeding other cities of comparable size like Mumbai, Kolkata and Chennai? Is there a structural difference in the city? Does Delhi's heavy motorisation make it congenial to be a city where rape is common?

At the outset, Id like to clarify that I am not arguing that we do not need an overhaul of the criminal justice system. The low conviction rates do require better investigation practices that result in higher convictions, a much greater sensitisation of police to move away from the mindset to compromise rather than register a case as well as the apathy of the general public to cases of rape. There is also the need for better policing and law enforcement at the neighbourhood level and possibly greater visibility of the police force in strength during the evenings and the nights. Significant changes in the patriarchal mindsets of people are also required. However, that is not the focus of this article.

Many of my women friends in Kolkata and Mumbai say that they feel reasonably safe even after 9pm in the city. On the other hand, women in Delhi feel distinctly unsafe after sunset. The first time that I visited Delhi in 2003, I got a sense why as a city it is designed to be unsafe. There were wide roads with cars zipping by at a rapid clip, large areas where there were practically no pedestrians and even larger areas which were poorly lit. The city had excellent infrastructure for motor cars, but was equally remarkable for having poor infrastructure for pedestrians and those using public transport. At the risk of sounding provocative, Delhi has set up the infrastructure for rape with the emphasis on private transport and motorisation. 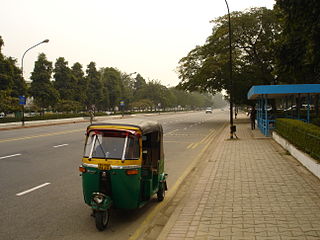 Wide roads are not a problem per se. But, the result of the policy to have wide roads in Delhi has resulted in the greatest ownership of motor cars when compared to any of the other metros. In fact, the ownership of cars in Delhi is almost double that of the next comparable city (Bengaluru). It is also more heavily motorised than Mumbai and Kolkata which are comparable population wise.

Some could argue that heavily motorised cities in the US with less public transport are safer than Delhi. In a context where every nearly every person drives a car the number of crimes against women could be lower, as people do not need common public spaces to be safe except around their home and their work place. However, when public transport is a key for mobility of many people, safe public spaces become critical for accessing public transport.

When Delhi (or for that matter, any city) starts designing its roads and public spaces for old people, young children and women pedestrians, it will automatically witness a drop in crime.

•  How they fool us, the outraged
•  Rape and Delhi

Delhi is in the position where while a large number of people do own cars, and yet a substantial number use public transport. A commuter need to walk to a point to get public transport, use it and then walk from the point where the vehicle has dropped you off.

The fewer people that use public transport, the less incentive there is to keep public spaces safe. Building wider roads and better infrastructure that facilitates private transport is likely to make Delhi even more unsafe (and ironically for those using public transport), as more and more people shift away from public transport to their own vehicles. Given the space constraints in India and the proclaimed policy of the government to move towards a public transport based system, increasing modal share of cars and bikes are not sustainable in the long run.

What is necessary in Delhi is more development: but development for people and not cars. A popular expression in Europe goes something like this A developed city is not one where poor people own cars, but where rich people take public transport to work.

With the exception of the tourist areas, Delhi in general is a pedestrian-unfriendly city. While Lutyens Delhi might be a very attractive piece of real estate, the fact that few people walk on the pavements there, along with the poor lighting lends itself to being a dangerous city. The BRT corridor which is one of the most pedestrian friendly stretches in Delhi has faced an innumerable number of obstacles in its implementation through litigation, protests by car users and others. There are flyovers all over the city of Delhi. However, if a pedestrian has to negotiate the junctions where a flyover is built, it is close to impossible as cars are whizzing past these points and at the same time, they have to walk longer distances to cross the roads there.

Through the design of the city, Delhi has reduced the number of people on the street resulting in greater possibilities of rape and other forms of crime. When Delhi (or for that matter, any city) starts designing its roads and public spaces for old people, young children and women pedestrians, it will automatically witness a drop in crime.

At another level, changes also need to be made in the way that bus contracts are given out in Delhi. Giving out contracts to an operator who has just five or ten buses, makes it possible for many 'fly-by-night' operators to set up shop. Penalties for any violations on these operators are very difficult to enforce as the operator can transfer all the assets to another company and reappear almost immediately. Establishing a minimum size of operator (say 500 buses) is also important, and ensuring that this is similar across all the regions in the National Capital Region (NCR).

Delhi will also have to create a system where more people can actually come onto the roads and come on more frequently. Encouraging street vending, having street festivals, closing off streets for neighbourhood festivals every week, encouraging activities in public spaces with women and children as the focus would all be necessary to ensure that Delhi moves to becomes safer.

It is even possible to consider interesting ways of deploying cycle rickshaws in particular areas, and deploying a citywide bicycle sharing system (for a million bicycles or more) and dedicated infrastructure for cyclists.

While law enforcement is necessary, it will require a change in the DNA and design of the city for a reduction in the number of rapes in Delhi. Addressing the structural problems of Delhi is a critical component of moving it down from being the rape capital of India.

URL for this article
http://indiatogether.org/delhirape-op-ed