Good cinema must inform, educate and entertain its audience. For most films, getting these right is difficult enough, without resorting to gimmicks, but every once in a while a film pulls off this combination, and that has been the allure of the movies. Egaro, a feature film that reconstructs history through one of the most popular team sports in India, is one of those.

Egaro (The Eleven) is a celluloid tribute to the eleven players of Mohan Bagan who won the IFA Shield in the final match against East Yorkshire in 1911. This year marks the 100th year of that wonderful win. The Indian team was comprised of ill-equipped, under-nourished soldiers competing against eleven physically stronger and better prepared British footballers. Ten of the eleven members of the team played the match on bare feet. Only one of them, Rev. Sudhir Chatterjee (Chandan Bhattacharya), who was a professor of a noted college, wore boots. The opponents, East Yorkshire, were well-equipped with proper football gear.

But the match had significance beyond the contest on the field, and that proved to be Bagan's strength. The game was played in the aftermath of Lord Curzon's engineered partition of Bengal in 1905, and the execution of Khudiram Bose for his attempt to murder Kingsford in 1908. Against this background, Mohun Bagan's victory against a team repesenting the rulers became a turning point in consolidating the discontentment and anger of Indians against the British administration.

The battle spread out to the entire state of Bengal, with crowds of people thronging in to watch the match. The British side of the audience was just a trickle in comparison. And the eventual victory by the Indian side is said to have driven the British administration to shift its capital in India from Calcutta to Delhi the same year.

"When I saw Lagaan, it worked like a trigger, and drove me to make my first film a historic one fit for the archive," says first-time director Arun Roy. "I began to wonder that if a film that uses a team sport within a period context can be such a hit even when it is based entirely on fiction, why not make a film on a real event that actually happened on home soil? I knew about the historic win of Mohan Bagan in the IFA Shield Final against their British opponents, East Yorkshire Regiment in 1911. It is considered a miracle in the history of football, and also in the history of British rule in India."

The film runs along several tracks that gradually merge to become one. It opens with a meeting of an underground revolutionary group led by Nagendra (Shankar Chakraborty), holding a meeting in a dark place, making plans to eliminate British officers. Rajen Sengupta, one of the players of the Mohun Bagan team, is part of this underground group. But when Nagendra finds that the young man's concentration is more on the match than on the movement, he keeps him out.

The fathers of most of the players of Mohan Bagan are dead against their sons playing against a British team. Abhilash Ghosh, one of the players who struck one of the two goals, is in love with a girl in the neighbourhood. But with all the time he spends practicing for the big match, his romance is sidetracked. Sudhir Chatterjee loses his college job because the British Principal hates to see him playing against a British team and his colleagues, who are also British, humiliate him. 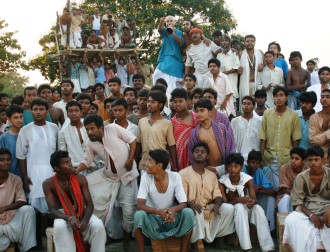 The crowds thronged in from across Bengal, and around the stadium there were thousands of others hoping to catch a glimpse of the Indian team locked in combat with the British.

The audience track during the game is most hilarious, with entertainment value drawn at the cost of the East Yorkshire players. Young boys climb up trees and tie themselves to the trunks with their red-checked gamchhas in case they fall off while clapping their hands to cheer their team. A simple man from Dhaka (Sunil Mukherjee) fights with the affluent father (Tamal Roychoudhury) of one of the players who does not like sitting next to a peasant. But when the last goal is struck, they hug each other in joy. Another zamindar Akshay Babu (Bhaskar Banerjee) sacrifices Rs.15 he had set aside to buy another zamindari for a 'front row seat' from a self-styled 'ticket-seller' to watch the match.

Two-rupee tickets are sold in black for fifteen. A street-side seller of batter-fried vegetable fritters pulls down the shutters of his shop to attend the match. The local nut case, crazy from the beating the British gave him, jumps for joy when Mohun Bagan strikes a goal. An actor (Gautam Haldar) who plays female roles in jatra performances cancels all his engagements, takes off his wig to reveal a bald pate and becomes a self-appointed commentator. He hurls choice Bengali abuses at the British players who cannot understand them. The British team does likewise, throwing humiliating invectives at every player while the match is on.

Women were not allowed to come to the field, though most of them were aware of what was happening. They kept score by flying kites in team colours, sending one kite up for each goal struck by a team.

These parallel and overlapping strands are woven together to create a single, harmonious narrative. During the practice sessions the captain Shibdas Bhaduri (Hirak Das) conditions his team to play in the rains by pouring water on his terrace. He tries out new strategies, chalks out plans and announces that the team will go ahead even if one or two players drop out in the penultimate moment. Hirak Das invests the character of Shibdas Bhaduri with the anger that makes the killer instinct come alive, spreading to touch the audience too. His leadership qualities are also on impressive display.

The acting is natural, and therefore compelling. One must particularly mention the name of Ronodeep Basu, who plays Abhilash. Debaparna Chakraborty as Bina, the girl who loves Abhilash is subtle, soft and very feminine, drawing strength from the violent death of her innocent grandfather, who is shown being tortured and killed by the British at the beginning of the film. Shankar Chakraborty is restrained and powerful as Nagendra.

The narrative is filled with dynamic action, both in its revolutionary dimension and in the game itself, till the two become one and the match blends into the revolution beautifully. The actors portraying the players, especially in the Indian team, were trained in football for three months prior to filming by Manojit Das, who was once captain of East Bengal and coached the Indian team. He even created the 'look' for the players. Three of the eleven actors are professional footballers themselves. Football coach Anilabho Chatterjee was roped in to choreograph, compose and orchestrate the 35 minutes of the film's actual scenes of the finals.

The film runs for 120 minutes without a minute of boredom even when the family backdrops of the players are shown. The match was shot in a football field in Howrah Maidan. Egaro is the first-ever period film shot entirely on actual locations around Barrackpore, Chinsurah, Shahebganj, Palta and Chandannagar. The songs are in the background score, dotted generously with chants of Bande Mataram or a line from a famous patriotic number by Kazi Nazrul Islam.

"I was extremely focussed on researching the period and the incidents that led up to the final match. I also went around knocking at the doors of big producers with my script, hoping to rope them in. Nothing worked," says Roy. "The big producers wanted me to cast big stars as the main players such as in the roles of Shibdas Bhaduri and Abhilash. I did not want any star, big or small, to impose their star image on my real-life characters. So I waited patiently and continued to persuade new and old producers to finance my film. After a year and a half, a new production house, Magic Hour Entertainment, decided to produce my film and agreed to my terms of not taking stars for my film".

The inhuman actions of British officers, police and professors towards the Indians is undercut by a few unbiased and humane depictions. Puller, the referee, refuses to bend to the pressure of powers-that-be to treat the match as a 'must-win-or-else' ego trip against Indians. "We must stick to the rules of the game, and nothing else should count," he tells his British superiors, putting his foot down. Piggot, a player of the Middlesex team injured in one eye by an inadvertent kick by one of the players in the semi-final, gives Abhilash a clean chit though the officers who visit him at the hospital urge him to pronounce the player's kick as intentional.

Abhilash's is not the only romantic interest that is sidetracked in favour of the match. Sudhir Chatterjee's beautiful British colleague, who has a soft corner for the professor, begins to fan herself rapidly in joy whenever Mohun Bagan scores a goal.

Egaro is about the patriotic passion that drove these eleven players to unite tens of thousands of Indians from the entire eastern regions who flocked to the game - from Dhaka, Burdwan, Midnapore, Comilla, Pabna - crossing barriers of caste, class, age, community and language to watch the players kick and beat up British teams on the playing field without being punished by the rulers because it was 'all in the game.' It was a historic event in the heart of British India, and is therefore memorable even a century after the capital moved away from Bengal. The film's English sub-titles should make it more accessible to a wide audience.

The IFA shield is a competition organised by the Indian Football Association, which governs the game in West Bengal. It is the fourth oldest annual competition in the world, and was initiated in 1893. The legend has it that it was dominated by British Army teams in India until Mohun Bagan broke the jinx with their win over East Yorkshire Regiment. This paved the way for other Indian teams to take on the British.

"All honour to Mohun Bagan!! Those eleven players are not only a glory to themselves and to their Club and to the great nation to which they belong; they are the glory to the game itself" - this was a line from a report in The Empire about the 1911 Mohun Bagan IFA Shield victory.

URL for this article
http://indiatogether.org/egaro-reviews