IMPACT REPORTS
Can accreditation ensure accountability?
The decision of the MoEF to allow only organisations accredited by the Quality Council of India to carry out environment impact assessment of interventions might sound promising, but is likely to achieve little. Kanchi Kohli discusses the inherent flaws in such notification.
25 September 2013 -

On 19 July 2013, India's Ministry of Environment and Forests (MoEF) announced a draft notification seeking amendment to the procedures laid down under the 2006 Environment Impact Assessment (EIA) regulation. If that goes through, the EIA reports under the notification will only be done by organisations which are accredited by the Quality Council of India (QCI) or National Accreditation Board for Education and Training (NABET).

While this may seem like a robust and progressive idea, it is quite far from that. The problems with the process are at two levels. The first is that there are serious lacunae in the manner in which the QCI process was itself designed and implemented. The second relates to the fact that there are several accredited agencies on the QCI list which have a history of preparing shoddy and incomplete EIA reports. These have been the basis of environment clearances for several hydropower projects which are today proving to be a death knell for rivers across India's waterscape.

The preparation of an EIA report is a mandatory requirement for industrial and infrastructure activities which are listed in India's EIA notification, 2006. It is considered to be one of the most critical steps in the overall process of ascertaining environmental impacts of any external intervention on the ecosystem as well as on people's livelihoods. EIA reports continue to be the key analytical, scientific and technical documents on which decision making rests. The QCI accreditation process and the proposed amendment by the MoEF needs to be understood in this light.

The much talked about and well-critiqued initiative to accredit EIA consultants was initiated back in 2007 under the auspices of the Quality Council of India (QCI) and the Ministry of Environment and Forests (MoEF). The reason for this was that EIAs, which were formally introduced in India's environment regulatory regime back in 1994, were being carried out in a manner considered far from satisfactory. Growing civil society and community engagement with the EIA process revealed increased evidence of how dismal the quality of impact assessments were.

For example, the very first report of the QCI in 2007, titled Scheme for Accreditation of EIA Consultant Organizations, clearly stated that, "it is crucial that quality of EIAs being carried out are of a high order so that possible impacts on environment of such activities can be assessed and mitigative measures could be adopted. However, the present situation is far from satisfactory, since the EIAs being developed, more often than not, do not measure upto the required quality."

The question to ask now is whether an accreditation process with a checkered history and questionable future can do any service to environmental decision making in the country. Or will it just be an eyewash at the least and a reward at the most to the EIA consultants who are today linked with some of the most controversial dam projects in the country?

Significantly, the QCI is an accreditation body jointly set up by the Government of India and the Indian Industry represented by the three premier industry associations, Associated Chamber of Commerce and Industry of India (ASSOCHAM), Confederation of Indian Industry (CII) and Federation of Indian Chambers of Commerce and Industry (FICCI). NGOs and activists working on this issue had raised concerns from the very beginning that the process of accreditation is being driven by associations whose members are the ones who fund EIA reports and would prefer to underplay the impacts, so that clearances can be sought.

In fact, in a Right to Information application back in 2007, the MoEF had denied any participation in the formulation and design of this exercise, when minutes of meetings had revealed otherwise.

The accreditation process has since then moved from being recognised as a voluntary effort to a mandatory one today. Even as the MoEF seeks to formally bring the QCI process to bear upon the EIA notification, the question of how accreditation is done in the first place remains unaddressed. 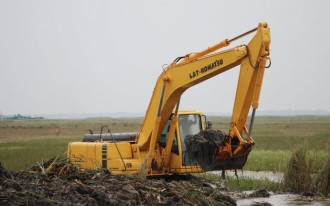 The fact that the agency authorizing consultants, the QCI, is in fact backed by industry associations representing the interests of project developers remains a core concern. And that the project developers are the ones who would fund the EIAs is something that continues to haunt the intent behind the impact assessment exercise.

•  EIA: The foundations of failure
•  A sham again

As another interim measure to deal with the issue of the quality of EIAs, the MoEF on on 5 October 2011, issued an office memorandum titled Ownership of EIA reports and other documents by the project proponent - Regarding. While there was no mention of how the quality was to improve, or irregularities caught before clearances, it did put the onus of poor quality documents on the project authorities.

This memorandum of the MoEF stated, "instances, however have been brought to the notice of this Ministry, wherein the EIA reports prepared by Environmental Consultants contain information/data copied from other reports. As it may be time consuming for the Ministry and/or the Expert Appraisal Committees (EAC) to compare the contents of one report with the other to check for copied data/information, the onus of submitting correct and factual information/data contained in the EIA report lies with the project proponent."

According to the memorandum, project authorities need to submit an undertaking as part of the EIA report owning the contents (information and data) of the EIA report. For projects where environment clearance is pending, the application will be rejected should any instance of copy-paste come to light. Where projects are already underway, the approval will be withdrawn.

Accredited consultants under a cloud

However, has any of the above changed the manner in which EIAs are done or decided upon? As on 5 September 2013, 166 consultant organisations were on QCI's accredited list. Many of these are ones whose integrity has been questioned more than once. For instance, WAPCOS Limited, which is a provisionally accredited consultant as per the latest list, is allowed to carry out EIAs for river valley and hydroelectric projects. Two of the most controversial EIAs that this consultant has prepared relate to the Teesta III hydroelectric project in Sikkim and the Athirapilly project in the state of Kerala.

The EIA for the Athirapally project has been proved to be inadequate by the High Court of Kerala and it was directed that a fresh EIA be prepared. Many concerns against the 2006 Teesta III EIA were pointed out by affected people at the time of the public hearing of the project. However, the project was granted environment clearance despite an incomplete EIA or full assessment of impact.

WAPCOS had also prepared the section on socio-economic aspects for the Lower Subansiri project in Arunachal Pradesh prior to the grant of clearance. Several social issues core to the protests, including the downstream impacts of the project, continue to be unresolved till date.

Another popular consultant for hydropower projects is Agricultural Finance Corporation Ltd (AFCL), which is also on the provisional list. AFCL had prepared the EIA for the Tipaimukh Hydro-Electric Project in Manipur. It is only recently that the forest diversion for the project has been rejected. But even when the EIA was being considered by the MoEF's Expert Appraisal Committee (EAC) in 2006-2007, the latter had detected several discrepancies. Yet the AFCL today finds itself on the QCI list with river valley projects as its consultancy beat.

A comprehensive review of the QCI list could yield several such instances where consultants who have produced faulty EIA reports and continue to do so still find a place in the list.

Many of these EIAs are not just benign documents. As mentioned earlier they have a crucial role to play in project decision making and to that extent could be held complicit in whatever happens at the project site. Thus, if hydropower projects have had a role to play in increased vulnerability to natural disasters in Sikkim or Uttarakhand, all those expert consultants who justified these projects should take responsibility for their assessments and recommendations.

The 60 days' window allowed for commenting on the MoEF's proposed amendment are almost over, with hardly any signs that it might not go through. The ministry which at first denied any association with the QCI is now set to institutionalise it. While there continues to be serious and justified doubt over whether the amendment can at all significantly change the quality of assessments, what is really up for test is the integrity of the consultants.

Can they be true to their knowledge and recognise that the ecosystem and the people dependent on it cannot continue to become "mitigative casualties," as they have been till now? Will the accreditation make our EIA consultants more responsible towards the environment or faithful to the terms set out for them by project authorities?

Kanchi Kohli is an independent researcher and writer based in New Delhi.

URL for this article
http://indiatogether.org/eiareport-environment