'Bhoomi (land)' might be a familiar word to farmers in India, but it's the newest word in India's administration, first brought out in Karnataka by the Revenue Department, now being copied in every State on the directions of the Central Government. It is Karnataka's best bid at electronic governance, a system wherein land records and their histories of sale have been placed online. 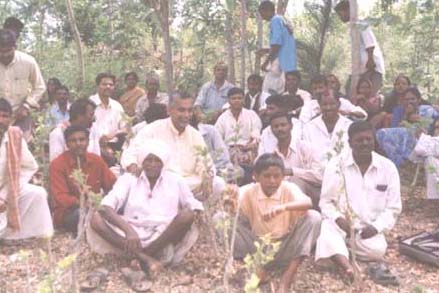 Farmers at a BAIF self help group : Bhoomi has helped, they say

Designed by Revenue Director Rajeev Chawla, an alumnus of IIT-Kanpur (Indian Institute of Technology), now Karnataka's first E-Secretary and sponsored by the Union Ministry of Rural Development, the celebrated 'Bhoomi' e-project won international recognition by being the finalist in the Stockholm Challenge Award last year, while it bagged the 2002 Commonwealth prize.

But only time will tell if its durability will outlive the memory of its award. Certainly the effort is laudable. Over 20million rural land records belonging to some 6.7million farmers in all 177 taluks of the State have been computerised using Microsoft platforms and tools and biometrics like thumbprint recognition of operators for security.

Since British days, land records had been entered manually into 2 ledgers by the Village Accountant ( VA; otherwise called 'Talathi' by villagers, 9000 such in KN alone), each serving 3-4 villages, who then passed the same into records kept at the Tahsildar's office at Taluk headquarters. One ledger noted the owners' names, crop details and rainfall, the other had village maps demarcating boundaries of respective owners.

Corruption is now being attempted to be stemmed by software which will not allow an official to proceed to another application until the previous one has been dealt with.

A request for a copy of one's land is known as an RTC (Record of Rights, Tenancy & Crops). But the RTC becomes a Mutation when a piece of land had to undergo changes due to death, inheritance or sale. A request, called a 'mutation' had to be made to the VA, who then put up notice for 30 days at the Tahsildar's office and passed the Mutation if no objection was received. Notorious for changing title deeds and owner's names for a price and delaying the entire process, the system got entrenched in corruption and exploitation of poor farmers.

"In the old days, they [villagers] would bow before me and ask me to convey their problems to the District Collector(DC). I had even more powers than the DC", says a nostalgic 57 -year-old Amruth Siddappa Nimbhhalkar of Arikere in Bijapur district. Now hedgy about how he manages without the income he previously earned, Nimbhalkar talks of spirituality as solace: "I am retiring anyway next year".

The new system has electronic kiosks set up at tahsil headquarters (later to hobli, or village-cluster level) with existing records in digital data in the kiosks each having two computers and a printer. A farmer wanting a copy of his land deed called an RTC ( Record of Rights, Tenancy and Crops ) known so because it contains additional data on crop, rainfall, soil, even the number of trees on the plot, fills out an application, gives it in at the kiosk counter and is supposed to receive his copy immediately for a fee of Rs. 15. Previously free of government charge, VA s took anywhere between Rs. 100 to 200 per document, depending on the importance of the transaction, with the entire process dragging on for months. The '30-day' notice was notorious to have stretched into months, depending on the payment received by the VA and the Tahsil office. 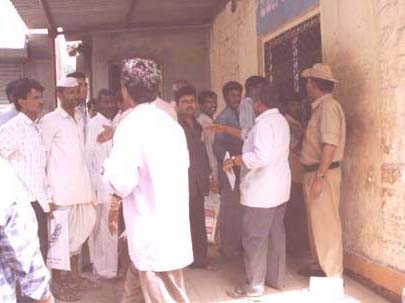 Frustration at the long queue at an e-kiosk in Bijapur

The VAs, mostly new recruits says the department, now sits behind the computer at the counter, one of three verifiers, the other two being the Shiristedar and the Tahsildar checking applications. Corruption, previously mainly through deliberate delays depending on the bribe received, is now being attempted to be stemmed by software which will not allow the 'computer VA', the Shristedar or the Tahsildar to proceed to another application until the previous one has been dealt with. In a similar fashion, no application for mutation can pass without the Tahsildar's personal verification, thus ensuring the officer's physical presence at the kiosk. He/She has to gain entry into his records through a thumbprint verification and then only pass applications recorded in the computers.

RTCs serve as 'ID' to a farmer; he uses it as surety in legal cases and most often to obtain agricultural loans from banks. It is thus poor and backward areas like Bijapur in north Karnataka, which has registered the highest demand for RTC certificates.

Previously being given free of charge by the government, though villagers say they paid the VA Rs. 5 per request, excluding the bribes they paid for mutations, a computerised RTC costs Rs. 15. And yet, in spite of the cost, Bhoomi has earned its initial investment capital of approximately Rs. 19 lakhs within 3 years, a point that Karnataka's Revenue Director and designer of Bhoomi, Mr. Rajeev Chawla makes for its long term viability.

Its response in the field though, depends, interestingly enough, on the socioeconomic profile of its place of operations. In Dharwad district, relatively well-off compared to northern Karnataka, farmers at a gathering convened by NGO BAIF's Karnataka branch, don't mind paying the fee for an RTC.

"We paid Rs. 5 previously to the VA; now we pay Rs. 15 at the taluk counter, but 'samasye illa' ( no complaints)", says 50 year old Basavanneppa Angadi, President of the BAIF-convened farmers' federation of self help groups. A group of 40 -odd heads of separate SHGs of which Angadi is the President, has gathered together at Surashettikoppa in Kalaghataki taluk of Dharwad district, mainly to discuss 'Bhoomi'.

The men all knew and liked the computerised copy of their RTCs, issued free of charge to all farmers in 2001; some had availed of further demands for RTC copies, but were unclear about how to handle mutation requests. The Village Accountant was still the man they would rather go to in such cases." This is pukka(concrete); no one can tamper with this now", said a farmer in Bangalore Rural District.

But in Bijapur district, which recorded the highest demand for RTCs after Bangalore Rural district, being mostly used for obtaining loans and thereby underlining the connection between RTC demand and low socioeconomic profiling of a district, farmers milled around me in angry frustration at the long queues.

"Just look at this line. This is second time I have come to try and get my RTC copy, " said 70-year-old Mehboob Modil Patel angrily." The Village Accountant was better; at least I could give my request to him."

The Village Accountant appears to be still entertaining such requests; probably due to the time and distance involved in travelling to Bijapur taluk from remote villages to collect an RTC. Money still changes hands presumably, the VA being hardly likely to bring in sheafs of requests gratis to the taluk counter to obtain RTC copies. Bhoomi staff at the Bijapur counter, which contains 450,000 records of 2 lakh farmers, now complain of long hours and the need for more kiosks to deal with the demand.

The counter earns anywhere from Rs. 4 to 6 thousand per day in income from RTC sales during crop seasons. In 18 months, says Assistant Deputy Commissioner Patil, Bijapur earned an incredible 20 lakhs. "Yet we have to send all our earnings back to the State government; we should be allowed to keep some as incentive and for financing infrastructure", he feels.

Ironically enough, it is the poor and disadvantaged that Bhoomi is meant to benefit. But Rajeev Chawla believes infrastructural problems such as the one in Bijapur is not a vulnerability for Bhoomi. "These are organisational flaps that can and are being addressed. What I want is for someone to challenge me in the technical working of Bhoomi to show it won't work", he declares.

He could be right about organisational flaps. But what Bhoomi has not been able to address is the prevailing mindset of gender disparity in the entire system. Women, whether in Dharwad or in Bijapur, neither knew of, nor were given, their first free copies of RTCs issued in 2001 for verifying their details. Some did not even know that the process for an RTC had become computerised. Land, being a male bastion, appears to be continuing that culture.

"IT cannot be held responsible for addressing all the development problems of this country, whether of illiteracy or gender or whatever, " counters Chawla. Still, in a country with such huge poverty and gender disparities, issues such as these could well be addressed by being remembered in every developmental effort.

For the time being, it looks as though Bhoomi is getting into the process of being on track." I want this system to become as paperless as the Indian Railways Reservation system," says Chawla, "wherein the whole country is paralysed if the Server shuts down, leaving no other option but to correct that hitch and continue."

Keya Acharya is a noted environmental jounalist. This article comes to India Together from farmedia.org, through Space Share, our content-sharing program for publishers of other public-interest content. Click here to learn more about Space Share.

URL for this article
http://indiatogether.org/eland-government