ELECTRONIC VOTING
EVMs: conspiracy of silence?
Why have the media bought the view that EVMs are infallible when some experts – and the Supreme Court – disagree? Ravikiran Shinde dissects the issue.
03 April 2017 -

The Electronic Voting Machine (EVM) row hit  Parliament in March with the Rajya Sabha discussing the fallout of the recent assembly elections and the Supreme Court getting into the act by sending a notice to the Election Commission (EC). The political parties have hit the streets and are demanding free and fair elections. In Maharashtra, a statewide agitation started on March 25. Parties burned an EVM  replica during Holi over alleged large scale tampering with the machines.

The mainstream media appeared unperturbed by all these developments, often ridiculing or ignoring any news related to the alleged EVM scam while restating the BJP and EC’s position that EVMs are infallible.

The EVM tampering allegations may have soared post the highly unexpected results of the Uttar Pradesh assembly election but a string of petitions in the Supreme Court  against the EC has kept the pot boiling. Moreover, the results of local body elections in Maharashtra and some instances of a few candidates receiving zero votes, along with the counted votes exceeding the cast votes in Mumbai and Nasik, only reinforced the suspicion of some parties that EVMs have been tampered with.

Yet, on counting day, March 11, as Mayawati and Arvind Kejriwal were raising questions about the election results in UP and Punjab, Barkha Dutt ridiculed Mayawati with a tweet. (Interesting to note that Ms Dutt had given zero coverage to the party that finally achieved the second highest vote share in the election).

Barkha Dutt ridiculed Mayawati with a tweet. Pic: The Hoot

In the nightly prime time debates, the choicest phrases were reserved for those who voiced the tampering issue.  Aaj Tak labelled its prime time programme  “When you lose, blame the EVM”.  Times Now ran the hashtag #EVMBahanaBrigade meaning ‘EVM excuse brigade’. Times Now anchor Navika Kumar  asked. “Why did AAP raise this issue in 2013? Why this excuse and bahana now?” 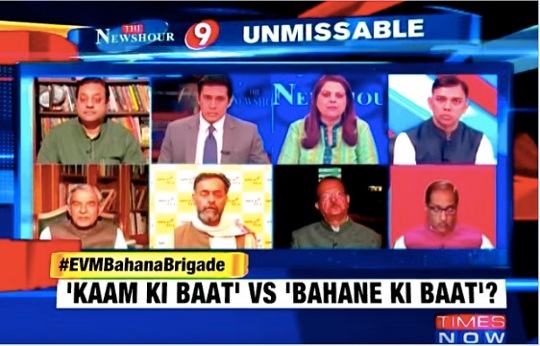 Several other channels such as IBN and ABP news had a similar narration. NDTV, which is widely (and incorrectly) perceived as an anti-BJP channel, chose not to question the EC. It tweeted that even the Supreme Court had called EVMs the best and safest in the world (the court has said nothing of the kind). NDTV’s tweet summed up the media’s response: a one-sided and twisted version of the issue.

Only NDTV’s Ravish Kumar had a comprehensive prime time programme with election expert K. J. Rao who had served as advisor to the EC. However, a careful examination of the show revealed that Kumar had crafted the questions carefully so as to allay fears about EVM-tampering. His leading soft questions to Rao asking him to explain why EVMs could not be tampered with were far from interrogative.

In the 40-minute programme, Kumar did not even bring up the topic of why a paper audit trail is not being installed in all EVM machines and why the government is not giving funds for this. In short, he should have generated questions in viewers’ minds rather than putting them to rest.

From these examples, it is clear that the basic thrust of the EC, the BJP and the media was that the same EVMs had won the losing parties elections in the past and that the machines were tamper-proof as they are unique. This conclusion warrants questioning.

Why the VVPAT is crucial ?

On March 24, the Supreme Court sent a notice to the EC on the allegation of tampering. This was not the first time it had intervened. On January 2, around a month before polling was to be held in the five states, the court had asked the EC about the timeline for implementation of the VVPAT system ( Voter Verification Paper Audit Trail).

The court was responding to a contempt petition filed by Waman Meshram of the Backward and Minorities Communities Employees Federation against the EC for not implementing VVPAT, along with EVM machines, as per the earlier Supreme Court order of October 2013. Meshram had argued that VVPAT should be implemented in all polling booths; otherwise ballot papers should be used.

The VVPAT system ensures additional safeguards in the EVM voting system where a paper receipt is generated each time a vote is cast. This not only assures the voter but also acts as a deterrent to machine manipulation before, during or after the polling as candidates can seek recounting of the paper receipt votes.

In the current EVM process, with no VVPAT, no recount is possible. In the UP elections, only a couple of dozen constituencies out of 403 had VVPAT, leaving almost 95% of the EVMs with no paper trail and rendering them vulnerable to tampering.

In its order of October 2013, responding to a petition filed by BJP leader Subramaniam Swamy arguing that EVMs do not currently meet all the requirements of international standards and are susceptible to hacking, the Supreme Court  ruled that, “The confidence of the voter in the EVM machine can be achieved only with the introduction of a paper trail. With the intention to have fullest transparency and to restore the confidence of the voters, it is necessary to set EVMs with a VVPAT system because a vote is nothing but an act of expression which has immense importance in the democratic system”.

Rejecting the EC’s contention that EVMs are infallible, the court asked it to implement the VVPAT system in a phased manner and directed the government to provide funding for procuring VVPAT.

But over three years later, the EC has not implemented the VVPAT system even to a minuscule 5% level.

Who says EVMs are infallible?

Is it true that the entire world has praised EVMs, as some BJP leaders have claimed, especially as none of the developed countries use them? In May 2010, science journalist Julian Siddle reported on the BBC that it was possible to ‘hack’ Indian EVMs and that they cannot deliver a transparent election process. The report quoted University of Michigan researchers who were able to change the results of an EVM machine by sending text messages from a mobile.

The details of this study are available at indiaevm.org. The team comprised Hari Prasad, an Indian engineer who was assisted by two other teams from the USA and the Netherlands, countries that do not have EVMs.

A New York Times editorial of June 21, 2009 titled “How to Trust Electronic Voting” said,  “In paperless electronic voting, voters mark their choices, and when the votes have all been cast, the machine spits out the results. There is no way to be sure that a glitch or intentional vote theft — by malicious software or computer hacking — did not change the outcome. If there is a close election, there is also no way of conducting a meaningful recount.”

In fact, BJP leaders forget that it was their own colleague, G.V.L. Narasimha Rao, who in 2009 wrote a book, “Democracy at Risk, Can We Trust Our Electronic Voting Machines?” with a foreword by none other than party veteran L.K. Advani.

The book carried forward from work done by a University of Stanford  computer science professor, David L. Bill, who wrote that, “Computerized voting equipment is inherently subject to programming error, equipment malfunction, and malicious tampering. It is time to recognize the reality that there is no basis for public trust in paperless EVM equipment”.

And yet, despite all this, the media have chosen to ignore the fact that the Supreme Court itself in its ruling has rejected the notion that the machines are tamper-proof. Nor have the media asked why the EC hasn’t made provisions for 100% VVPAT implementation.

Is it really sensible to think in this day and age that any electronic equipment can be 100% tamper proof? Even giants like Apple and Google do not make this claim for their devices.

Why is the EC dithering over VVPAT?

On its website, the EC says that it has written ten letters to the government asking for funds but to no avail.  Why hasn't it approached the President of India then? Why hasn’t the EC held a press conference to tell Indian voters that it wants to implement VVPAT but the Narendra Modi government is not funding it? Is the EC’s refusal to implement the Supreme Court’s 2013 ruling in letter and spirit tantamount to contempt of court? Why hasn't the EC been forceful and shown any desire to complete the VVPAT process before the 2019 elections?

These are some of the tough questions that needed to be asked, but were not. While we may not be able to go back to the ballot voting, implementing VVPAT is the only way to restore the trust of the voter and that should be of primary importance for the EC.

Either it should make every effort to get on with implementing VVPAT in all booths before the 2019 general election or it should face allegations about its intentions.  As for the media, it’s time it woke up and did its job by raising valid questions.

URL for this article
http://indiatogether.org/evms-conspiracy-of-silence-media