SERVICE STRENGTH
Expanding too fast?
Although officially at peace, the army's theatre of operations has grown steadily. It has responded by boosting its numbers, but that has its own challenges, says Firdaus Ahmed.
23 May 2012 -

The details of the Nyoma Incident need not detain us here. It can be predicted that there will be multiple versions of the unfortunate incident floating in cyber space soon. The military court of inquiry will ascertain the facts, justice will be meted out and the artillery regiment that served as the site of the incident disbanded. The standard operating procedures for the rest of the army will be firmed up and will no doubt include a stricture against families accompanying officers when out in the field.

While all this can understandably be expected to be internal to the military, it bears reflection as to whether this is an isolated case, an 'aberration' to anticipate an army spokesperson. Or, is there something in it on the good health of the army for the ear of wider society?

The army has been expanding incessantly over the past three decades. The first round was over the turn of the eighties of mechanisation. The following decade witnessed the raising of the Rashtriya Rifles. The last decade saw the doubling of Rashtriya Rifles and raisings of two mountain divisions for the China front. This decade will see the raising of a mountain strike corps, promised recently by the Defence Minister.

The message that emerges is one of insecurity. While earlier it was insecurity prompted by Pakistan, lately there is the China threat to contend with. For the first time this month the government accepted the possibility of a 'two front' threat, one the army has been plugging for the past three years. India, relying on its limitless resource in manpower, has decided that expansion of the service strength is one part of the answer.

The other focus is on acquisitions - that have placed India as the top most arms importer. This status India will continue to have over the coming decade. India has also gone in for nuclearisation, with the Agni V test and INS Chakra making their mark this year. The nuclear future consists of multiple warheads for the Agni and mating of nuclear ballistic missiles with the nuclear powered submarine.

Taken together the three prongs - manpower, material and nuclear - can reasonably expected to keep India safe into the future. But this expectation can be thwarted if the army proves unable to absorb the changes. Tritely put, it's the man behind the gun that matters.

Expansion has been managed quite well by the army earlier. In wake of the 1962 debacle, Emergency commission officers were inducted. The showing of the army in 1971 war vindicated the decision. However, this time around, the expansion has been in the wake of incessant deployment in operations. The story begins with Siachen and Op Blue Star in Punjab in 1984. It is followed by the IPKF sojourn and a near simultaneous deployment on deinduction from there into Punjab, Kashmir and Assam. Thereafter, as one Chief put it, the army has only been 'officially at peace'. 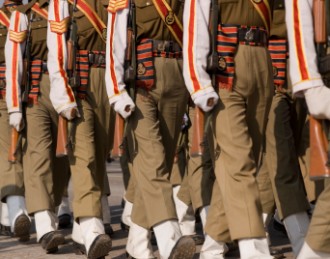 Expansion has been in the wake of incessant deployments, but it must not be at the cost of quality.

The army has proven responsive. It has over time firmed in a rotation policy for Rashtriya Rifles that caters for primary group cohesion to an extent. The army website indicates that several training schools have been opened up for preparing junior leaders under a 'train the trainer' system. News reports of summer exercises at field army level, such as the recent Exercise Shoor Vir, indicate a heavy schedule for collective training. Socialisation has been furthered by greater military interface with veterans.

Nevertheless, the challenge continues to be daunting. Universally, the army's good health is dependent on professionalism of the officer corps. Therefore to focus here on this facet first makes sense. The intake is over 1500 officers a year. (Compare this to the 900 who make it to the civil services every year.) The tension between quantity and quality can only be expected to be resolved in favour of quantity, since the army never tires of pointing to vacancies in the officer cadre pegged consistently in the low five figures.

This was the case in wake of the Kargil War, when it was rumoured that standards had been diluted for expanding intake in real time. Also there was reportedly a one-time truncating of pre-commission training length. The chickens have apparently come home to roost, with the incident in question suggesting a breakdown in discipline of officers commissioned post Kargil War.

There is also deficiency in socialisation into military mores. Rashtriya Rifles and field postings having created such personnel turbulence that both horizontal and vertical integration have been impacted at both the officer and soldier level. Additional raisings mean the transfer of empathetic leadership and stolid manpower to the new set up; the vacancies so created in existing organizations being filled up by raw recruits.

Further, the age and service of officers holding appointments at unit level has gone down, and with good reason. However, the pressures on them of performance and demands from the wider army, that has in turn gone top-heavy, are higher. And all this is in face of higher career pressures stemming from competition to go up a wide-based but steep sided pyramid.

Acknowledging the latter, the army's response has been to compound the problem. The army has opened another Officer Training Academy at Gaya, intending to have a higher officer intake but of short service commission officers. While resolving the problem of the pyramidal structure of its promotion system, it could deepen the other one of fraying officer-soldier bonding.

The army may be intending to overcome this problem by higher levels of manpower and higher technological levels in relation to the adversary. The Kargil War was won by concentrating two divisions and a large proportion of the firepower available in J&K, thereby overwhelming the enemy. However, neglecting the idea that 'the man behind the gun' is consequential may prove debilitating over the long run.

This point has a wider import. Expansion has not been restricted to the army. In fact the security sector has been perhaps the only sector that has expanded over the past decade, given that the neoliberal paradigm believes in contracting government. Even more ambitious expansion has been witnessed in the central armed police forces, with the Central Reserve Police Force becoming the world's largest internal security force. And yet, it is unable to penetrate into the forests of Abujmad!

The point that emerges is that expansion is the easier answer. And in any case it must not be at the cost of quality. Since this has been the case with both the army and the paramilitary, compensation needs to be done by heightened training, accentuated socialization and intimate supervision. This is doubly important since these forces are operationally committed, particularly in people-centric counter insurgency.

The gravity of the problem can be inferred from the fact that its most significant facet has been pushed right to the very end: impact of societal turbulence, especially so in an officer cadre springing from the lower middle class. Given this, it can be sensed that Nyoma was only waiting to happen. The army leadership that has been enmeshed lately in peripheral matters needs now to return to its bread and butter.

URL for this article
http://indiatogether.org/expand-op-ed