The Indian military has so far maintained a dignified distance from the civilian and government affairs. But now there appears to be an increasing proximity between the military and the government. This does not bode well for India, writes Firdaus Ahmed.

Normally, it is only at the Republic Day celebrations that one would expect to find India’s three military chiefs (along with troops) at the centre of the national capital’s Rajpath, the main road that witnesses the annual march past. However, when last spotted on the Rajpath the three chiefs were with a brigade worth of troops arrayed behind their prime minister in breaking the world record for the highest number of participants at a Yoga event.

That India was out to get into the Guinness Book for a record that ought by right to be its own, corralling all, ranging from civil servants to the brigade close at hand at Delhi Cantonment, is understandable. However, news from Tezpur (Assam), was that another three thousand troops turned out with a similar purpose. These troops presumably otherwise stand guard on India’s sensitive McMahon line with China. 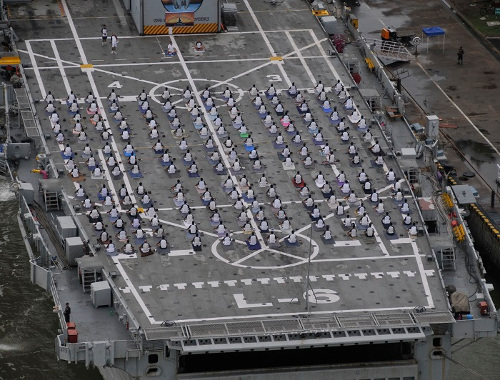 The army’s association with such initiatives of the government illustrates a deepening proximity between the government and its army. This is a departure from the earlier practice of a dignified distance between the two that has served India well enough so far.

Such association with government ‘events’ is easy to spot, since the military has publicised such participation. The Swachh Bharat Abhiyan (Clean India campaign) too witnessed cadets at the Officers Training Academy, being duly photographed cleaning up Elliot beach in Chennai on World Environment Day, when they really ought to have been at training.

Digital India Day was used by the army to launch the automation of the service records of its soldiers, Arpan – an inauguration that would be expected to have its own rationale and not one predicated on delivering any political dividend for the government.

On Army Day this year, the army promised to serve up a day’s pay to the Prime Minister’s relief fund for flood relief in Kashmir at a time when the ruling party at the centre, the BJP, was angling to be part of the government then under formation in J&K. In the event, a set of officers reportedly cried foul and instead of the amount finding its way to the fund, the army has since controversially billed the government Rs 50 million for its flood relief effort.

Other such ‘events’ include commemoration of the sixteenth anniversary of Kargil War in New Delhi this month, when army bands reportedly regaled mall-visitors in Delhi to military music.

Earlier, local army formations would observe such anniversaries, some involving locals who helped win the war, with a modest celebration at the regimental level meant to be motivational for units that had taken part in the operations.

Where a mere sixteenth anniversary of a small border war is being marked in such a manner, it is easy to understand month-long celebrations for the 1965 War on its fiftieth anniversary. This is largely an attempt by majoritarian political formations to militarise Indian society, seen in their world view as relatively placid and inert. Unfortunately, the event places the military at the centre and therefore can been seen as a potential avenue of politicizing it.

From a narrow political perspective, it is perhaps to form the backdrop for a grand announcement by the prime minister of his government acceding to the One Rank One Pension demand, a raging current controversy in India in which military pensions are set for a hike.  A narrow political perspective also perhaps explains participants of the first operation that was carried reportedly inside Myanmar against Naga rebels who ambushed a military convoy being hosted to tea by Mr. Modi in early June. This is surely overkill in exultation over a controversial raid with questionable provenance and results.

Even if discerning an increasing proximity of the military with the government is an overkill, the government for its part appears to be projecting as much. A glossy brochure, In Defence of the Nation, has been put out by the defence ministry on its website toting up its initiatives over the past year, including the military’s participation in the much-vaunted ‘Make in India’ programme. Earlier governments were content to let the ministry’s annual report do the talking.

There also appears to be a change in the government-military relationship. The military has been favouring this for long, resentful of the insertion of what it saw as a bureaucratic layer between it and the political master. The ruling party however is apparently using the defence as yet another prop in its refashioning of India.

Otherwise notorious, Samuel Huntington was most credible in his first foray into theorising. He had it that military professionalism was expertise in the management of violence. Since the military was a profession, they were best left to manage themselves but under civilian oversight.

To Huntington, the preferred model of civilian democratic control of the military was through the exercise of what he termed objective civilian control. In this model, the military was distanced from politics, though it did own a part of decision-making owing to its expertise and social responsibility as a professional group. The military leadership was to represent the military’s opinion based on objective security indices and their analyses.

On the other hand, subjective civilian control was through the politicisation of the officer corps in which the military leadership was part of the governing structure and imbued with its political ideology.

It is clear that thus far objective civilian control has been at play in India, even if partially so, in so far as the military has remained outside the decision-making structure by unnecessary insertion of a bureaucratic layer between it and the political level.

However, since the BJP’s coming to power there appears to be a putative shift away from what the military called bureaucratic control towards subjective civilian control. Leveraging its defence initiatives for political mileage and the government’s use of its military muscle to embellish the 56’’ chest of its head is unexceptionable. However, the incipient tendency worth cautioning against is the proximity emerging between the government and the military.

Extreme examples such as the proximity between the German General Staff and National Socialism are staple for military sociology buffs. These are however ‘ideal types’. Approximation of reality with the ideal type can be taken as a measure of social health or otherwise. Currently, it would not be fair to mistake the conservative bias intrinsic to all militaries, which is also understandably present in India’s military in the form of subjective penetration of the ruling dispensation into the military.

However, this joint subscription to an otherwise worthy political tradition, conservatism, increases the likelihood of the military going further down the route of cultural nationalism alongside. Amartya Sen has blown the whistle on the manner in which institutions, in particular academic ones, are facing the full weight of government interference as part of the long term reset of India. Can it be that the army will be eventually spared similar attention?

It would not do for the military to be bought off by governmental largesse such as the seventh pay commission in lending itself to governmental jamborees. Late realisation of the fact that subjective civilian control is here to stay will not augur well either for military professionalism or for national security.

URL for this article
http://indiatogether.org/government-military-relationship-op-ed