No rain, but 'snow' and waterparks
Water-starved Vidharbha has a growing number of water parks and amusement centres. The iron laws of rural life don't apply in the entertainment complexes built right next to the poor. In a region that scarcely receives adequate water to meet people's drinking needs, there is plenty of water for the playgrounds of the rich, finds P Sainath.
28 June 2005 -

Even when it's 47 degrees in the rest of the region, it's cool here. A little away from us is a patch that clocks in at minus 13 degrees. This is "India's first Snowdome" - in burning Vidharbha. Keeping its ice rink firm costs Rs.4,000 a day in electricity charges alone.

Welcome to the Fun & Food Village Water & Amusement Park in Bazargaon gram panchayat of Nagpur (Rural) district. A portrait of Mahatma Gandhi greets visitors in the office of the huge complex. And you're assured daily disco, ice skating, ice sliding and "a well stocked bar with cocktails." The 40-acre park itself offers 18 kinds of water slides and games. Also services for events ranging from conferences to kitty parties.

The village of Bazargaon (population 3,000) itself faces a huge water crisis. "Having to make many daily trips for water, women walk up to 15 km in a day to fetch it," says sarpanch Yamunabai Uikey. "This whole village has just one sarkari well. Sometimes, we have got water once in four or five days. Sometimes, once in ten days."

Bazargaon falls in a region declared as scarcity-hit in 2004. It had never faced that fate before. The village also had its share of six-hour - and worse - power cuts till about May. These hit every aspect of daily life, including health, and devastated children appearing for exams. The summer heat, touching 47, made things worse. 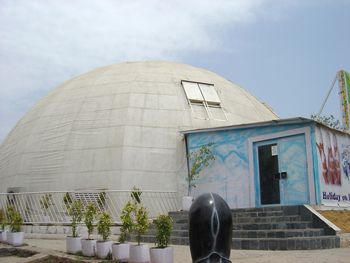 India's first "Snowdome" imported from Japan, in Bazargaon panchayat of Nagpur (Rural) district, Vidharbha. This is a region where some villagers have got water once in ten, even 15 days. [Picture by P Sainath]

All these iron laws of rural life do not apply within Fun & Food Village. This private oasis has more water than Bazargaon can dream of. And never a moment's break in power supply. "We pay on average," says Jasjeet Singh, General Manager of the Park, "about Rs.4 lakhs a month in electricity bills."

The Park's monthly power bill alone almost equals the yearly revenue of Yamunabhai's gram panchayat. Ironically, the village's power crisis eased slightly because of the Park. Both share the same sub-station. The park's peak period begins with May. And so things have been a little better since then. The Park's contribution to the gram panchayat's revenue is Rs.50,000 a year. About half what Fun & Food Village collects at the gate in a day from its 700 daily visitors. Barely a dozen of the Park's 110 workers are locals from Bazargaon.

Water-starved Vidharbha has a growing number of such water parks and amusement centres. In Shegaon, Buldhana, a religious trust runs a giant "Meditation Centre and Entertainment Park." Efforts to maintain a 30-acre `artificial lake' within it ran dry this summer. But not before untold amounts of water were wasted in the attempt. Here the entry tickets are called "donations." In Yavatmal, a private company runs a public lake as a tourist joint. Amravati has two or more such spots (dry just now). And there are others in and around Nagpur.

This, in a region where villages have sometimes got water once in 15 days. And where an ongoing farm crisis has seen the largest numbers of farmers' suicides in Maharashtra. "No major project for either drinking water or irrigation has been completed in Vidharbha in decades," says Nagpur-based journalist Jaideep Hardikar. He has covered the region for years.

Mr. Singh insists the Fun & Food Village conserves water. "We use sophisticated filter plants to reuse the same water." But evaporation levels are very high in this heat. And water is not just used for sports. All the parks use massive amounts of it for maintaining their gardens, on sanitation and for their clientele.

"It is a huge waste of water and money," says Vinayak Gaikwad in Buldhana. He is a farmer and a Kisan Sabha leader in the district. That in the process, public resources are so often used to boost private profit, angers Mr. Gaikwad. "They should instead be meeting people's basic water needs."

Back in Bazargaon, sarpanch Yamunabai Uikey isn't impressed either. Not by the Fun & Food Village. Nor by other industries that have taken a lot but given very little. "What is there in all this for us," she wants to know. To get a standard government water project for her village, the panchayat has to bear 10 per cent of its cost. That's around Rs.4.5 lakh. "How can we afford the Rs.45,000? What is our condition?" So it's simply been handed over to a contractor. This could see the project built. But it will mean more costs in the long run and less control for a village of so many poor and landless people.

In the Park, Gandhi's portrait still smiles out of the office as we leave. Seemingly at the `Snowdome' across the parking lot. An odd fate for the man who said: "Live simply, that others might simply live."

URL for this article
http://indiatogether.org/h2opark-op-ed