Fast, smooth, and affordable - but when?
Delhi's High Capacity Bus System promises enormous gains, but has been a long time coming. Dr. Geetam Tiwari of the IIT-Delhi sheds some light on the project and the difficulties in the making it happen.
01 July 2004 -

Delhi's forward looking High Capacity Bus System (HCBS) project has been hanging fire for the last couple of years. Promoted as safe, speedy and affordable public transport system - compared with the higher cost alternatives for the metropolitan region - the new proposal has been conceived and developed at the premier Indian Institute of Technology Delhi. The project also has the support of the Delhi Chief Minister.

But agency approvals for the HCBS project faced enormous delays. There were reports that the Finance department was not agreed on the merits. Recently, the public works department did give its clearance to the project. "It is difficult to justify the delays given the number of meetings and presentations we have had on HCBS", says Dr.Geetam Tiwari, Associate Professor of Transportation Planning at IIT-Delhi.

Geetam Tiwari has been closely associated with the HCBS project. She is also the Chair of the Transportation Research and Injury Prevention Program (TRIPP) at IIT-Delhi. TRIPP's work involves integration all issues concerned with transportation in order to promote safety, cleaner air, and energy conservation. The faculty is involved in planning safer urban and inter-city transportation systems, and developing designs for vehicles and safety equipment.

The prolonged delay is partly rooted in the establishment of the special lanes for the new buses. Corridor development ran into severe hassles with public works and utility bodies. It even prompted the Chief Minister to propose a phasing in of the HCB buses first, without establishing the corridors themselves. But special corridors are the centrepiece the new system, and without them the mobility of the buses will be crippled.

Says Tiwari, "The Chief Minister is very keen to establish the complete system. An appropriate institutional mechanism is lacking to carry forward the project. She is keen to establish an authority like the DMRC." (Delhi Metro Rail Corporation)

The many ups and downs in the journey of the new system thus far points to one key issue. There are logistical difficulties that stem from the manner in which public land is used and management by multiple public agencies. Despite IIT-Delhi working with Delhi's transport department to establish the feasibility of HCBS corridors on existing roads, complications developed. "Public land management in Delhi is with multiple authorities at present. There is very poor coordination between HCBS planning and other schemes such as construction of flyovers, etc. Every land owning agency is continuing with its own plans", Tiwari points out.

Despite the slow progress, the merits of the HCBS are strong enough for it to be a strong candidate in major cities in India, especially because of its track record in a variety of other countries. The following informative Q&A with Geetam Tiwari about the HCBS has been republished from a bulletin of the TRIPP program. 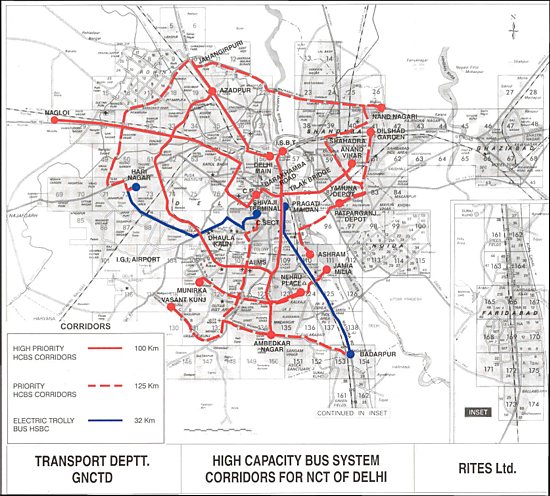 Q&A with Dr.Geetam Tiwari on the HCBS

What is a High Capacity Bus System or Bus Rapid Transit System?

First of all it is important to understand that the HCBS or BRTS is a total system. It is safe, fast, comfortable, and comparatively affordable and makes the best use of the available road space. The road is designed and engineered with dedicated bus lanes on which no other vehicles encroach. Likewise there are separate lanes for cyclists, motorized vehicles and pedestrians. This set-up makes for safety and speed. These urban buses are low-slung with wide doors. This makes it easier and faster for the passengers to get on and off the bus. The doors on these buses open only when the bus comes to a complete halt which increases the safety for all travelers. Terminals and bus-stops are so constructed that their platforms are level or nearly level with the floors of the buses making for easy and safe access to all passengers. These buses are fitted with power steering, automatic transmission and rear-engine placement which combine to reduce driver fatigue and pollution and increase fuel efficiency and safety.

Another feature of these urban buses is that they are fitted with an automatic vehicle tracking system which enables real-time monitoring of individual buses. Special lanes are provided for pedestrians and every other kind of motorized and non-motorized transport; the turnaround time on a bus corridor for an urban bus will be minimal; in addition to this, space is made available for hawkers and vendors near the bus stations.

How is the HCBS brought into being? Who will the players be?

The government will provide a specialized infrastructure: A newly created Public Authority will be in charge of planning, promoting and controlling the system; the other stakeholders in the undertaking will be a private concessionaire who will operate a state-of-the-art fare collection system; and all other operations will be provided by private companies. In planning the HCBS for an entire city, various players will be consulted even at the initial stage; they would involve municipal departments, traffic police, relevant national agencies, non-governmental organizations, transport associations, drivers unions, etc.

How does it compare with other forms of rapid transit systems?

The HCBS is a low-cost, flexible, mass transportation system that costs 50 times less than a Metro system and can serve as much as 100 times the area of a rail-based system. The HCBS infrastructure of about 20 kms can be built in less than 18 months while a metro is likely to take 7 years; also, the project development and planning process is much quicker. The HCBS would cost Rs. 5 to 50 crores (Rs.1 crore = Rs.10 million) per km, while the metro would cost Rs. 100 to 1000 crores per km.

In which part of the world has the HCBS been tried out?

What are the special benefits to the commuter?

The segregated bus lanes make for faster travel of commuters in the HCBS; it improves traffic management in general and as such, improves the driving conditions of all other vehicles on the road as well. The segregated bus lane is designed in such a manner that it claims to reduce injury accidents by 40% and fatalities by 50%. The urban buses of the HCBS are high speed vehicles, sometimes articulated and always very comfortable with wide doors and low floors, level with the platforms of the bus stops and with a carrying capacity of over a hundred passengers.

This system, as a whole, produces a decreased load of pollution. Security, cleanliness, easy access, customer comfort, and minimal stoppage time, all combine to make for increased efficiency. Prominent and clear displays of arrival and departure timings create added value and minimize waiting anxiety. Such real-time information displays and clear signages generate a sense of customer security. The whole system is disabled-friendly with ramps and platforms and is a boon to the infirm and the old. Time-saving and efficient fare-collection is made possible at the bus station prior to boarding the vehicle.

What would you say is the social impact of the HCBS on society as distinct from other mass rapid transit systems such as the metro and the skybus?

Both the metro and the skybus are capital-intensive and not as context-relevant as the HCBS. I shall, therefore, confine my views to the HCBS. We must realize that not only is urbanization here to stay, but that it seems to be the way of the future. Urbanization makes for diversity and heterogeneity in socio-economic conditions with multiple economies operating in close proximity to each other. The formal sector can keep on operating only as long as there is an informal sector for it to feed on. The latter is always larger because it serves both, the former and itself.

Transport infrastructure design must not ignore the needs of pedestrians, cyclists and public transport passengers.  •  Ahmedabad takes the bus
•  The TRIPP Website, IIT-D

If this is clearly recognized by our city-planners and policy-makers they would handle the challenge of urban travel and transportation with vision and empathy for all. The HCBS is the most suitable system in promoting modal shifts to a more efficient and less polluting form of transportation. Often, nearly fifty per cent of the inner city's population lives in low income houses (slums or shanty towns). The urban transport system must cater equally to all segments of society. If the transport infrastructure design ignores the needs of pedestrians, cyclists and public transport passengers, the latter will be forced to defy the law, exposing themselves to high risks on the road; motorized vehicles are then forced to operate at sub-optimal levels. To a large extent, from all the choices available to us, it would appear that the HCBS is the one single operating mass transit system that comes close to best addressing all the relevant issues involved.

Other considerations are: The Metro is rigid and has no flexibility while the HCBS can be altered, added-to, subtracted from and redesigned at low-cost and at short notice; also unlike the Metro, the HCBS can reach every part of every city and make itself accessible to other modes of feeder-transport like cycle rickshaws and three-wheelers scooters. There is a minimal need for staircases in some instances in the BRT System while it is essential in all cases for metro stations. The bus stop does not entail a long walk for the commuter unlike the metro station; these factors make the HCBS user-friendly.

URL for this article
http://indiatogether.org/hcbsdel-economy