SKYSCRAPERS IN MUMBAI
High-rise fantasies
The deserted areas of Wadala lie cheek by jowl with a Mumbai Port Trust goods terminal. It lacks public transport and other amenities, but the MMRDA is hell-bent on spending Rs.4128 crores to erect a skyscraper here. Darryl D'Monte reports.
31 January 2009 -

The best explanation for our fascination for erecting ever-taller buildings in this country may come, somewhat surprisingly, from psychologists. Were Freud alive today, he would have no hesitation in ascribing our preoccupation with building dizzy skyscrapers to an unconscious desire to erect phallic symbols. These structures seem to establish that we are up there, in some urban stratosphere, with the few cities and countries rich and powerful enough to construct them. These potent symbols pronounce that we have arrived, we have asserted our superiority and can look down with pity, at best, and contempt, at worst, at ordinary mortals on the earth below.

What other desire could possibly have motivated the Mumbai Metropolitan Region Development Authority (MMRDA) to contemplate putting up a 101-storey "iconic tower" at Wadala, a nondescript eastern suburb? At 526 metres - 1725 feet - this is scheduled to be the world's third tallest, after Burj Dubai and Freedom Tower in New York, both currently under construction. The MMRDA boasts that it will inch slightly taller than a 101-floor building which has come up in Taipei.

The irony couldn't have been stronger: the open areas of Wadala are known for being 'no man's land' since they lie cheek by jowl with a Mumbai Port Trust goods terminal and see hundreds of heavy trucks trundling in and out through the day. An Inox theatre is located there but only those with cars ever venture out into this deserted area because it lacks public transport and other amenities.

Such considerations don't seem to have influenced the MMRDA, which is hell-bent on spending Rs.4128 crores on this hare-brained scheme. The cost of construction will be Rs.3600 crores and the infrastructure around the 1.4 lakh square metre plot will add another Rs.500 crores. Even if it is on a build-operate-transfer (BOT) basis and the state government agency wants to attract multinationals and other high-end occupants to rent space in the building which, it hopes, will fetch it Rs.1800 crores per year as rent, the entire economics appears wonky.

Is the state government aware of the financial meltdown, where India's real estate firms are reeling under shock? Prices are anything from 30 per cent lower but firms, so accustomed to making a killing at 200 or 300 per cent on their investments (one has only to recall that the cost of construction, which admittedly leaves out land costs, hardly exceeds Rs.2000 a square foot), have halted several construction projects and credit has dried up. The go-slow is most visible in the ongoing redevelopment of land belonging to cotton mills in midtown Mumbai, like the 11-acre Jupiter Mills plot bought by India Bulls. The buildings are being designed by India's most prolific architect Hafeez Contractor who, other architects allege, suffers from an 'edifice complex', but the rate of construction has slowed perceptibly after the financial crisis.

The further irony is that the tallest building in the world, Burj Dubai, whose height till recently was a closely-guarded secret, is itself in some jeopardy due to the global crisis. On 17 January, Emaar Properties, its developer, announced that it had reached 818 metres finally - the world's tallest man-made structure. It is part of a $20 billion development, which will include a shopping mall, hotels and a range of residential complexes. 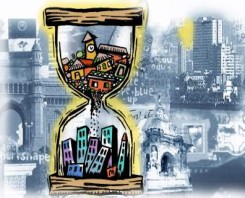 The tallest building in the world, Burj Dubai, whose height till recently was a closely-guarded secret, is itself in some jeopardy due to the global crisis.

When completed, Burj Dubai will meet all four criteria listed by the Council on Tall Buildings and Urban Habitat (CTBUH), which classifies the world's tallest structures. CTBUH measures the height of buildings to the structural top, the highest occupied floor, the top of the roof and the tip of the spire, pinnacle, antenna, mast or flagpole. It is presumably on some such criteria that the MMRDA hopes to best Taipei 101 which was built five years ago.

However, it is no secret that Dubai is in deep financial crisis: recent travellers report how there are scores of ships carrying building materials and other goods which are simply cooling their heels in the docks for want of anyone to claim them. Since Dubai doesn't have petrodollars unlike its Gulf neighbours, and world trade has been badly affected, it is in considerable trouble. Indeed, there are reports that Abu Dhabi is gaining at Dubai's expense and is preparing to purchase several of its assets at knock-down prices. One only wonders what the fate of Burj Dubai, which panders to the indulgent fantasies of deracinated elites, will be in the months, if not years, to come.

That should give the MMRDA some cause for sleepless nights. As its name suggests, its main task is to plan for the entire Mumbai Metropolitan Region, which will reach 40 million by 2050 - one of the biggest urban agglomerations in the entire world. But for reasons best known to it, the Maharashtra government has turned it into an infrastructure development agency which then sells developed land to the private or public sector and earns substantial profits. It has done precisely this in the Bandra-Kurla Complex, which is fast becoming a central business district to rival the existing one at the southernmost tip of the island city.

Indeed, it is one of the few agencies in a state which is deeply in the red that still has resources. In the process, it has abandoned its role as a planner: for example, all the 50-odd fly-overs and sea links have been located and constructed by the Maharashtra State Road Development Corporation without consulting the MMRDA, although these road projects will change the face of Mumbai irretrievably.

It is now treading on altogether new terrain - that of virtually turning into a property developer. It is proposing to hire a "global firm" which will build, lease out the apartments and provide it an assured income for 35 years. But the iconic tower has everything going against it: property prices are falling precipitously and no one can predict the future of the financial crisis, even if India is relatively insulated from it. Which multinationals will rent space in this dizzy and isolated tower if their fortunes elsewhere in the globe are perilous? As it is, Mumbai has some of the most expensive real estate values in the world. The global firm may well find that it has bitten off more than it can chew and leave the MMRDA holding the can.

There is already a precedent in the proposed make-over of Dharavi, said to be the single biggest slum precinct in the world. A former US-based architect, Mukesh Mehta, has convinced the state government to turn over sectors of this huge, sprawling area to builders' consortia, most being foreign firms with Indian counterparts. The first round of bids came in, but then the real estate crisis dug in and bidders found that they would be out of pocket - or at least, with far less profits then they originally envisaged.

They persuaded a pliant Chief Minister to increase the area of each tenement for resettled slum families from 225 to 269 sq ft, which means that they would get an equivalent area for sale to private buyers. Dharavi has already been singled out for largesse, with the state trebling the floor-space index (the permissible height in relation to land occupied) to 4 but even all these sops haven't worked and the project is in the doldrums.

The second handicap of the Wadala project is its location. Although the Builders' Association of India has welcomed the project, the proximity of such ugly and polluting factories as Rashtriya Chemicals and Fertilisers Ltd cannot possibly be a plus point so far as residential accommodation is concerned. Ironically, it has taken a builder, the Lok Group, to point out that instead of building high-rises, the state should repair some 20,000 dilapidated buildings, its potholed roads and slums. Mumbai has the unenviable distinction of possessing the highest proportion of slum dwellers - officially put at 55 per cent, or nearly 8 million people - in the world, more than the population of several countries.

In fact, in a case of the left hand knowing not what the right is doing, the MMRDA has taken over 114 acres of land which was acquired under the former Land Ceiling Act in the far-flung suburbs of Borivli, Thane and Kalyan for low-rental housing schemes in the next five years. It is also acquiring 100 acres at Kanjurmarg for generating jobs and services, which is a welcome departure. The Maharashtra Housing and Area Development Agency (MHADA), under the mistaken emphasis on economic liberalisation, had till recently not been building homes for the poor. When this month it invited applications for only 3863 houses ranging from Rs.3.3 lakhs each of "economically weaker sections", Rs.12 to 17 lakhs for middle income, and Rs.56 lakhs for high income buyers, it rapidly sold out some 90,000 forms, earning Rs.90 lakhs in the process, and was printing more because it thought that 5 lakh forms would run out by the deadline at the end of this month.

This has only confirmed the assertions of experts and activists that there is a huge demand for affordable homes in Mumbai and other cities, which builders - public and private - have ignored. While the MMRDA seems to have partly understood this, it is embarking on an expensive folly by going in for such a high-rise tower. It should do some homework and find out what the current response is to booking flats in other Mumbai skyscrapers, like Raheja Platinum and Waves (both 80 floors) and Jupiter Mills with 75. In the 1970s, Mumbai would pride itself on being a "mini-Manhattan" because of its emerging high-rises, but this is one feature which it would do well not to emulate, considering that most of its citizens don't even have a roof over their heads.

URL for this article
http://indiatogether.org/highrise-government