Himachal power project under scrutiny
Kanchi Kohli reports from the public meetings on a Hydro Electric Project that involves diverting a river tributary near Manali in Himachal Pradesh.
01 June 2004 -

The issue of compensation does not arise, they said, there is no way we are going to allow for the Duhangan stream to be diverted. Clear intentions, straightforward decisions and fearless articulations were the highlights of a meeting in Jagatsukh village, near Manali in Himachal Pradesh on 1st May 2004. They were also the strong willed voices of the women.

A 192 MW installed Hydro Electric Project has been proposed on the Allain and Duhangan tributaries of Beas River in Himachal Pradesh (Manali, Kullu district). The project envisages the diversion of the Duhangan stream through a tunnel to the Allain stream and power will be generated through an underground powerhouse. According to the project authorities, by themselves, neither of the streams in themselves have enough water to generate the projected power. The combining of the two streams by diverting one is being pursued as a way to get around the viability problem. 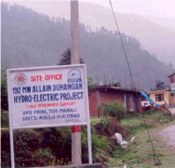 The project would affect about five settlements near Manali, namely, Prini, Jagatsukh, Choti Manali, Aleo and Shuru. The villages most affected are Prini and Jagatsukh, located next to the larger stream Allain and the smaller Duhangan stream, respectively. The construction activity will block the present access to the forest for the villagers.

After obtaining the mandatory forest and environment clearances for this run of the river project, the project proponents (Rajasthan Spinning and Weaving Mills Limited) have sought funding from the International Finance Corporation (IFC), a private sector arm of the World Bank. IFC while considering funding the project proponent felt that the Environment and Social Impact Assessment (ESIA) on the basis of which a clearance was given for the project by the Ministry of Environment and Forests (MoEF), needed updating and enhancement and therefore requested the company to update the ESIA. IFC also requested the company to carry out public consultations with the affected villagers. New Delhi based Environment and Resource Management (ERM) has been commissioned to carry out the new ESIA as well as organize the public consultations. As part of this, a Jan Sunvayi (public hearing) with a neutral panel was organised on 20th and 21st of May 2004.

But prior to Jan Sunvayi, on 1st May 2004 a pre-public hearing meeting was held at Jagatsukh. An NGO, the Kalpavriksh Environmental Action Group was the (neutral) facilitator. The purpose behind the meeting was to enable impartial sharing of information with the villagers about the impacts/issues related to the project. It would also give the company time to prepare its responses to the concerns of the villagers at the public hearing.

One of the biggest flaws of the public hearing process in India is the lack of information on the project and impacts prior to the actual event. Most often documents are not available in time, are bulky and in technical English, a language beyond the reach of those going to be affected by a project the maximum. For Allain Duhangan too, an earlier public hearing in January had presented a similar scenario. Therefore, it was hoped that the pre-public hearing meetings would set an important precedence of a process by which local people are adequately informed before any public consultations with them. The ESIA and some other relevant documents had been translated and had been made available for reference, which is a very rare occurrence.

The discussions at Jagatsukh were volatile! The villagers had categorically stated in earlier meetings that they would not allow for Duhangan water to be diverted for a variety of reasons. However, they patiently heard the explanations presented by the company and ERMs presentations. This included pictorial representation of what various components of the project would look like (e.g. reservoir, tunnel etc), and the impacts. Mitigation measures presented in the ESIA were also shared with the villagers ranging from finding alternative routes to pastures; electronic monitoring of water flow in the Duhangan; to regeneration of trees through compensatory afforestation; strictly regulating labour movement, and so on.

The villagers responded in unison after they heard what the company and ERM had to say. For them, they said, the Duhangan stream was the only source of water both for irrigation and drinking water purposes. Any diversion will severely impact its availability. They further pointed out that the there is no point the company assuring that the company would maintain a minimum flow in the stream after diversion, when the present water availability itself was not adequate. Diversion would further hurt availability and maintaining minimum flow after diversion was simply not viable.

Women at the Jagatsukh meeting.

There were several other apprehensions ranging from personal security of women to the strong cultural and spiritual association with the stream. Women from Jagatsukh regularly access the forest for collecting fuelwood and other forest produce. Many of them also stay for long periods of time at a Hamla, a hamlet in the forest. The power project will introduce construction labour in and around the forest and the women are concerned for their own safety. News about alleged incidents of sexual abuse of women at other project sites in Himachal Pradesh has made its rounds here.

Many discrepancies in the ESIA report were also highlighted. Local, regional and national NGOs like Navrachna, and South Asia Network on Dams, Rivers and People (SANDRP) had earlier critiqued the ESIA document for its inadequate and incomplete data, and stated that in its present form it cannot be the basis to decide whether the project should be undertaken or not.

Further, the Jagatsukh residents simply seemed to have lost faith in the company. According to them, following the public hearing in January, the company had sent labourers to the project site, which they were not supposed to do so. The villagers mentioned that they did not believe any of assurances on the mitigation measures. Also, because the construction activities will block access to the forests, the project proposes to develop alternate routes to mitigate the inconvenience. But according to the villagers experience of using the forests over the years, alternate routes to the pasture lands are simply not feasible. So it was a clear no to the project at Jagatsukhs pre-public hearing.

Pre-public hearing meetings were also to be held at Prini, Aleo, and Shuru villages. However, a combination of bad weather and a village festival at Prini did not allow for the meetings to take place. Where they did take place (like Prini), the attendance was very low and Kalpavriksh representatives (the facilitators) could not make it. The Prini meeting focussed not so much on the diversion of water but the issue of compensation. Perhaps the villagers had assumed that the project had been cleared and the main issue to be discussed was how they would be compensated for their land that would be acquired.

Strangely none of the womens issues that were the critical to Jagatsukh meeting had been highlighted in Prini. When the women at Jagatsukh were asked why this would be the case, they mentioned that once there would be a joint meeting of the women from both the villages, the issues will emerge without any inhibitions.

Since the three members from Kalpavriksh (who acted as facilitators) did the exercise on a voluntary basis with no remuneration from either IFC or the company, they were able to present an unbiased report. They submitted a report to the public hearing panel and the IFC prior to the main Jan Sunvayi. Highlighting critical points from the Jagatsukh meeting and the ESIAs inadequacies, the report concluded, Overall, though we are appreciative of the attempts made by the Company and ERM to be open to a consultative process and to revising their plans and documents, we strongly feel that IFC should not consider funding this project till the above steps are taken. In the absence of a full ESIA, a full assessment of alternatives, the explicit written consent of the affected villages, and a credible plan for compliance, providing funds for the project would amount to a violation of basic ecological and social requirements.

The report was translated to Hindi and circulated to participants of the Jan Sunvayi as well.

The Jan Sunvayi did take place as planned, at Prini. The discussions were quite on the lines of what had been the case till then. There were a series of recommendations from the panels report. They included the need for the company to strengthen its capacity to interact and interface with the villagers; in-house mechanism for quick grievance redressal with certain specific components; a joint team to be set up for data verification and so on. On the more critical note, the report suggests that the various issues and discrepancies in the ESIA need to be immediately responded to and that the company needs to make public the time frame within which they would do so.

The public hearing's panel recommended that a committee be constituted with representatives of the Company, local people, state and district administration, IFC and some independent persons of repute.

At another level the hearing panels report recommended that the company must initiate the task of addressing the issues related to mistrust and disagreement, for instance, like the one on availability of water. Finally the report suggested that there should be an independent mechanism to ensure that all the undertakings and agreements between the Company and the people are respected. For this purpose, a committee should be constituted with representatives of the Company, of the local people, of the state and district administration, of IFC and with some independent persons of repute.

But what happens if during fresh studies and the addressing of discrepancies it turns out that there are social and ecological impacts which have far reaching consequences and cannot be mitigated? What if efforts at mitigating those impacts actually question the viability of the project itself? Will the project proponents and financiers withdraw or will the clearance be withdrawn?

Even as these questions remain, there is the deep rooted traditional and spiritual belief of the local people. For them, Duhangan is Dhomiya Ganga, sacred and therefore must not be messed around with. This is the collective wisdom about their relationship with the river -- which a technical study would not be able to parameterise.

URL for this article
http://indiatogether.org/hphep-environment