The foggy winter morning on 19 December did not deter Sabita Debbarma, a young Tripuri mother, from bringing her four-month-old baby girl to the Mother and Child Clinic of the Community Health Centre (CHC) for immunisation. The young mother, living in Mohanpur block of West Tripura district, 35 kilometres off the capital city Agartala, had stored this date in her memory when the announcement for the immunisation programme was made at the local weekly market by traditional tribal drum beaters.

If Debbarma heard about the immunisation programme through the beat of an ancient drum, others have heard the same announcements from the whirr of modern aircraft. Dr. Jagannath Muhuri, Director, Family Welfare and Preventive Medicine says, to reach the immunisation programme to the most remote and inaccessible pockets of the state, the health department uses a helicopter service. 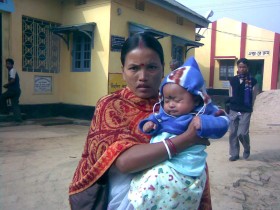 From drum beating at markets to using helicopters, Tripura has been making rapid strides in its immunisation programme, pushing this important health care intervention among tribal as well as non-tribal mothers and children. Priya Sarkar, the supervisor of the clinic with 25 years of experience, told me there has been increasing awareness among tribal mothers about the immunisation programme.

She attributed this to a constant push by the government through vigorous campaigns involving panchayats and anganwadi centres under the Integrated Child Development Scheme (ICDS), particularly in rural and remote areas of the state. A 37-point tribal development package, announced by the Chief Minister on 15 September 2003, included a special immunisation component for all children and pregnant women in the Tripura Tribal Areas Autonomous District Council (TTAADC) area, to be implemented by the Health and Family Welfare department.

The state health infrastructure includes two medical colleges, two state-level hospitals, two district hospitals, 11 sub-divisional hospitals, 11 CHCs, 76 primary health centres and 579 sub-centres. Barring the sub-centres and 16 PHCs, all others hospitals have round-the-clock doctors' service. The anganwadi centres have been provided weighing machines to measure the weight of each infant and pregnant women at various stages, Underweight expecting mothers are provided nutritional supplements in these centres. According to government statistics, under the ICDS scheme 389,208 children in the 0-6 age-group have been served through 7357 centres.

On this day, Debbarma had to wait for quite some time before the weekly vaccination programme began in the clinic. Within an hour, tribal mothers of the surrounding area, in tidy tribal attire and pushing through the wintry mist, all gathered there to have their children immunised. Thanks to diligent participation from women like these, during 2006-07, the state has surpassed its immunisation targets, and achieved 120.6 per cent success in DPT vaccinations, 120.8 in polio, 140.9 in BCG and 122.2 in measles, against the national achievement of 94.7, 94.6, 100.1 and 90.4 per cent respectively. Across the board, the state's numbers are 20 to 40 per cent higher than the previous year.

The involvement of ICDS workers in the immunization programme has been instrumental in boosting the programme, Jagannath Muhuri said. Most ICDS workers know the names of infants and pregnant women in their locality, not just their counts.

Usha Rani Rudrapal, the multipurpose worker (MPW) of the clinic, was busy carrying vaccine kits from the cold-chain room. Pausing to speak with me, she said that the adoption of some unique customary practices prevailing among the tribal people since the time of the medieval-era royal dynasty helped spread messages among them. "It is customary for the tribals that important announcements are made by beating drums during the weekly market day. This helps immediately spread the message about any new announcements from the state. This has made it much easier to alert women about the scheduled dates of the programme," she said.

In Tripura, MPWs like Rudrapal follow a busy schedule; apart from providing vaccines to children and pregnant mothers in clinics, they make regular field visits along with the anganwadi workers to survey infants and pregnant mothers, and also attend panchayat meetings with Community Health Guides to promote awareness. Minister of Social Education and Social Welfare Manik De says that the government's thrust on immunisation of infants and giving tetanus doses to pregnant mothers is a part of the government's objective to "take care of the baby right from the mother's womb", for better human development in the state.

"With the objective of ensuring two doses of tetanus during pregnancy, and the complete immunization of infants, the department has started conducting a wide survey. To gear up this process, the state government has also made provision to provide added remuneration, equal to that paid by the central government to these workers for the purpose," he added.

The Hepatitis Foundation, Tripura has been conducting an expanded Hepatitis-B vaccination programme since December 2002.So far, it has vaccinated 1.25 lakh people in the state, said Dr. Pradip Bhowmik, president of the organisation. The foundation has set up its clinics in 22 government health centers in the state, where the vaccinations are provided every Sunday. The Foundation has 1000 members, who constantly work to spread the message of a Hepatitis free Tripura through various awareness programme.

The Hepatitis-B vaccination programme in Tripura, however, is not a free service, and one has to pay Rs.25 for children and Rs.50 for adults. The state government has made budgetary provision to reimburse BPL families through panchayat systems, Bhowmik stated.

To link grassroots workers and public officials better, the state health department has come up with Micro Action Plans for Immunization (MAPI) at different levels in the state. The MAPI for the Mohanpur CHC has recorded 1743 pregnant women and 1588 infants during 2007-08, said Dr. Samir Das, the Medical Officer in-charge. Based on the area's demographics, the MAP has set a monthly target of 145 pregnant women to be given tetanus shots and 132 infants to be immunised. Vaccination is provided to those in the 0-12 age-group and to pregnant women each Wednesday. On average, around 100 children and pregnant women are vaccinated during each such day, says Rudrapal.

Dr. Anuka Bhowmik, medical officer of the Child Welfare and Immunisation Clinic of the Department of Pediatrics of the Agartala Government Medical College Hospital, says the government's efforts to provide better services to pregnant women and strengthen the immunisation programmes have resulted in amazing health indices. The Sample Registration Survey of the Centre, conducted in 2005, recorded an infant mortality rate of 31 in the state, against a national average of 58. According to the State Population Policy, published in August 2001 the Maternal Mortality Rate in Tripura is 4 against the national average of 4.37.

Ratna Bharali Talukdar is a freelance journalist based in Guwahati, Assam. She received the Chameli Devi Jain Award for Outstanding Women Media Person and the Ramnath Goenka Excellence in Journalism Award in 2005 and 2006 respectively. This article has been produced as part of a study facilitated by a grant provided to the author under the TATA-RGVN Senior Fellowship programme.

URL for this article
http://indiatogether.org/immune-health