FILM REVIEW
Layers of violence
Vijay Tendulkar's Kanyadaan is not about domestic violence. It is about deeper, multiple, and sometimes invisible layers of violence that is an integral part of society. Shoma Chatterji reviews the play.
29 April 2011 -

Hardly any of the 32 full length and 23 one-act plays that Vijay Tendulkar wrote can be accused of being conventional or compromising. The film scripts that he wrote, like Aakrosh, Ardh Satya, Saamna, Sinhasan, Umbartha, Nishant, Manthan and Aaghat, centred around his preoccupation with violence at all levels - emotional, physical, social and political.

His better-known plays Shantata! Court Chalu Ahe (1967), Sakharam Binder (1972), Kamala (1981), and Kanyadaan (1983) are as relevant today as they were when he wrote them. Ballygunge Swapnasuchana recently presented a Bengali translation of Kanyadaan in Kolkata, directed by renowned director and actor Bratya Basu. The presentation reminded us that Kanyadaan transcends barriers of time, culture, education and gender in today's 'shining' India.

The title Kanyadaan is an irony. It spells out the contradiction between the play's statement and the scriptural meaning of the word . the giving away of the daughter to someone as a philanthropic 'gift' where the right of ownership is passed on from the girl's (kanya) father to her husband. Hindu scriptures point out how the groom, while accepting and acknowledging this 'gift', has to make three promises in public three times over to be just (dharma) towards the 'gift', to earn sufficiently (artha) to support this 'gift' and all that springs out of it (family, children) and to love (kama) this 'gift' which is now his wife.

Vijay Tendulkar's Kanyadaan is very different from the one elaborated in the scriptures. Jyoti (Sohini Sengupta), the adult daughter of Nath Deolalkar (Meghnath Bhattacharya) and Seva (Swatilekha Sengupta), two committed social activists, chooses her husband Arun (Bratya Basu), who she meets in college and is fascinated by his talent for writing poetry. The fact that he belongs to the Dalit community does not come in the way of her affections, because of the Gandhian values of secularism her Hindu Brahmin father has inculcated in her

Though her mother Seva and brother Jyotiprakash (Bijoy Mukherjee) have reservations, Jyoti is firm. Nath is thrilled because it will endorse his public image as a 'secular Hindu Brahmin' who has no qualms about his daughter marrying an educated Dalit who is also a budding poet.

The marriage over, the play unfolds layers hidden in the schizophrenic mindset of Arun Athole, who makes his devoted wife his punching bag, beating her everyday, getting drunk to his eyeballs, taunting her Brahmin antecedents, living off her earnings and in short, using her as his object of hate against the entire hierarchy of caste that has humiliated, oppressed, insulted and tortured his Dalit forefathers. Her silent response and quiet tolerance of this all-pervasive violence angers him into further violence, creating a vicious circle for both the violator and the victim.

Arun does not realise that in his very perpetration of violence towards his wife and her family, he is unwittingly replicating his father's behaviour towards his mother, suggesting that his education and intellect have not overridden the circumstances of his birth and upbringing. Looked at from this perspective, Arun too is a victim of the same institutions as his wife. 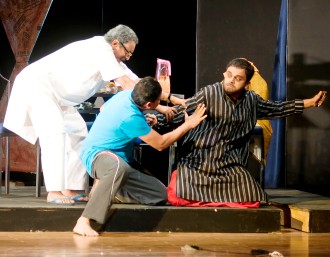 Arun Athole, the poet, invites the father-in-law he hates as chief guest at the launch of his autobiography. Nath Deolalkar is forced to accept because refusal to grace the occasion might bring more violence upon his beloved daughter, although in his mind he spits venom on the son-in-law. The chameleon-like Arun changes colour every minute, punching the entire family with his sarcasm, his deliberately drunken moves, his suited-and-booted, ill-fitting sophistication and his artificial swagger, who cajoles a wife he thinks has walked out and without who, his life is at stake.

Kanyadaan is not about domestic violence. It is about deeper, multiple, and sometimes invisible layers of violence that is an integral part of civilised society. It is the peg to hang all the other violences from . the parents' emotional and psychological violence inflicted on their unsuspecting children; the history of violence of the upper castes against the Dalits; the violence structured into the psyche of an educated young Dalit who thinks that castesism is the sole cause of his life without dignity; and the violence that sustains within a Dalit family, seen in Arun's angry outpourings to his parents about his childhood.

The single-set play set against a black backdrop is decorated with figures drawn from Warli paintings, perhaps a conscious choice, with larger-than-life Warli figures dominating the backdrop, but unlike Warli art, unequal in size yet holding hands. The furniture has grafted Warli figures as part of the décor. The light design adds texture, mood and dimension to the setting that reach beyond the physical beauty to evolve into a structural part of the play's total design. The music is low-key and secondary to the acting.

Sohini Sengupta as Jyoti is her daddy's baby, sweet and sugary, obedient and subservient in the beginning, then with time, slowly learning to imbibe her victimisation with tolerance. Though she is quick to learn the error of the choice she has made, she is determined to live on with her husband. It is her way of avenging her father who 'gave' her 'away' perhaps the minute she was born, to his preachings - impractical, grandiose and self-adulatory and to imbibe these blindly and without question.

Seeing the world as it is

In the last scene, trembling with anger, Jyoti turns around to face her father in disgust. "You taught me that there is nothing evil in man and if there appears to be any, it can be rectified." She accuses him of forcing her to learn the harsh, merciless and brutal truths of life through the violence she is constantly exposed to, especially from Arun who can no longer be rectified with tolerance, love or togetherness.

The climactic scene between father and daughter is a bit too weepy and overly sentimental for a play that is dominated and defined by anger and violence in many forms. "I am a sweeper's wife, remember, a sweeper's wife," she screams in anger, walking out of the house she was born in, effectively cutting away from her roots and her parents. Sohini's performance gains momentum along with the heightened anger that runs like an undercurrent through the play.

Kanyadaan is an actor's play. It is more about the human condition than about music, set design and light effects. It leaves a lasting impression of shock that slowly simmers as the audience makes its way out of the theatre.

The most significant thing about the play is that it raises more questions than it throws up answers. It points an accusing finger at the Brahmin's 'progressiveness' as much as it emotionally bashes up the 'educated and enlightened' Dalit. It raises questions about 'ideal parenthood', positioning this opposite 'obedient and submissive children.' In so doing, it somehow confuses us about our generally accepted notions of 'good' and 'bad' and 'right' and 'wrong' and about what constitutes 'violence' and what does not.

Bratya Basu's casting is apt not only in the histrionic shades of characterization and enactment, but also in the appearances the characters project. Meghnath Bhattacharya, tall, imposing and dignified, slips smoothly into Nath Deolalkar matched with very good acting except towards the end which is a bit melodramatic. Swatilekha Sengupta as his wife Seva, looks the part and performs it almost to perfection . loyal as a wife, committed to social work and to the women's movement, yet extremely exploitative of her son Jyotiprakash, a strapping young man with education and intellect reduced to a serving boy, a cook, a helping hand by his own parents.

Bijoy Mukherjee gives a wonderfully controlled performance as Jyotiprakash. The naming of their two children by the Deolalkar couple, the daughter is called Jyoti while the son is called Jyotiprakash, are ironies of their life dictated, controlled and conditioned by their parents to live a life in the symbolic, metaphorical darkness of the unknown, the anonymous, the wronged and the experimental guinea pigs.

URL for this article
http://indiatogether.org/kanya-reviews