BOOK EXCERPT
Karma Sutra
With the closure of the dance bars, the sex industry has another arm. Thousands of women without education have lost their livelihood. They have to cash in on their looks before the passage of time wrinkles it. Excerpts from Rajendar Menen's book.
26 June 2008 -

The ladies bars, which shot into the media spotlight with their closure, are expensive and most men who visit them have a drink and spend a lot of money to watch beautiful women dance. It is an extravagant and harmless way to spend time. The women charge enormous amounts for more private sessions and very few men can afford them.

And those who can are only getting rid of ill-gotten wealth. Most business transactions in India involve payments under the table and ladies bars are a good way to get rid of the money that can't be stored in banks or used with credit cards and cheque books. The parallel economy in India is colossal. There has to be some way to spend the money that can't be kept legitimately. It will make good economic sense for the government to support a proliferation of such bars. It will generate employment and the money that needs to be hidden will surface. It is an excellent way of mopping up black money. The morality issues that have been raked up to support the ban won't cut a denture anywhere because the girls simply disappear and find similar employment with a different calling card.

At the bars the women dance energetically and with an imaginative show of skin to loud Hindi film music rich in innuendo and beat. They are in sarees and other traditional Indian costumes and their dances look far less obscene than the 'item' numbers that sell Hindi cinema at the box-office. Men shower the girls they fancy with currency notes that are picked up by attendants and dropped into boxes set aside for such collections. The dancers take a portion of the largesse. The management decides what to do with the rest.

Several people in positions of power have to be paid to allow all this to happen. It is widely accepted that hundreds of thousands of rupees are dropped into the boxes in the ladies bars every single night. It is quite a spectacle: non-stop dancing, strobe lights, loud music and scores of men seated around tables drinking, eating and ogling away. A Hijra dance is also added to the scream of offerings if the management feels like it. A compilation of both genders in one form, neither fully masculine nor covertly feminine, stretching wildly to music, always meets with requests for an encore. It adds variety to the choreography. The garden has a new flower.

At erratic intervals, a man beckons a girl with currency notes or he just walks over to the dance floor and garlands her with money. Some men join the dancers too to the accompaniment of wolf whistles and loud appreciation. Everyone has a great time. Bouncers keep a close watch and there is never any ruffle in the proceedings. Its all owned and run by unlikely bedfellows brought together by the lure of quick and big money born without a chartered accountant's whistle or a padre's conscience. 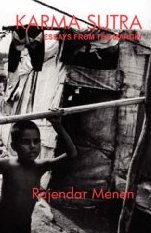 The author's book Karma Sutra: Essays from the Margin was published by Saga Books in February 2007.

Now, with the closure of these bars, the sex industry has another arm. Thousands of women without education have lost their livelihood. They have to cash in on their looks before the passage of time wrinkles it. So they have slipped into the flesh industry in every corner of the city, moved to other states in India and even to different countries. Sex workers have a very short shelf life. They have to mint the moment even if the sun has temporarily blighted it in eclipse mode.

I have interviewed several bar girls. Most of the interviews have taken place in the green room. It is a little room with mirrors and benches, painted in innocuous cream or pastel shades, with a toilet attached to it. It is very basic. There are containers of talc, soaps, makeup kits, a few combs and towels. You finish your dance, rush in, change clothes and prepare for another round. You adjust your make-up in the large mirror, ask the others how you look, take a final glance, and you are off. There is no time even for gossip.

After the show, the girls change into ordinary, everyday clothes, if they have the time, and finally get a chance to yak away. They will talk about the money earned and about the customers. Some of them will accompany clients for the night, but most of them will go home to families that they look after with their earnings.

It is very late at night when they pack up, early morning really, and they don't need more attention on the way home. So make-up, jewellery and all the glamorous outfits are removed and they get into dowdy salwar kameez if they can. Groups of women don't always travel at this time of the night and so they are a visible presence. Cabs wait outside the bars. They share it to their destinations somewhere in this lonely, dreary city or to the nearest railway station if they are living far away. A spate of rapes and robberies has made the authorities place an armed policeman in the ladies compartment. If the policeman behaves himself, this can be a deterrent to crime.

Lata is from Agra, from a basti near the Taj Mahal. She says she is twenty-seven and married with two children. Her husband left her, the children are in school and she takes care of old and sick parents. She is slightly built and wears spectacles when she isn't dancing. Her features are soft. She isn't garrulous like the others and can pass off as a chemistry teacher at some municipal school. She has a stern look and a commanding air. You will never imagine that she makes a living dancing to currency notes.

"I make good money," she tells me. "But it is hard work. You know how it is. Dancing for so many hours every day is not easy. My feet pain every night and I need to be massaged. I have varicose veins and take medicines. Every man thinks we are game. I haven't been to anyone till now. I dance, collect the money and go home. I have many responsibilities. My children are in an English medium school and my father has lakva (paralysis). I have to look after them. If something happens to me, they are finished. I can't even afford to fall sick for a day. I pray to God that nothing happens."

Several people in positions of power have to be paid to allow all this to happen.

I ask her if she has given a thought to marriage again. "No, I will never marry again," she retorts fiercely. "It is no use. I will have more kids and more problems. I am very happy without a man. Who needs a man anyway? I am earning well. I can also get sex anytime I want, so why do I need a husband? Marriage is just legal prostitution."

Rani is also from Uttar Pradesh. She is also in her twenties and is married with children. Her husband is still with her but doesn't contribute to the household. "He drinks all the time and doesn't work. If I don't give him money, he hits me. I don't really care about him, he can leave me and go if he wants to, but I am worried for my children. Nothing should happen to them. I should secure their future. That's my only concern."

Both girls have bank accounts and have made small investments. They met in Mumbai and have become good friends. They dance at the same bar, live in the same building, go shopping together and help look after each other's families. There is great bonding. They understand one another well. They also go home to their villages together, along with their families, at least once a year. They don't have to tell the world what they do for a living. It's their secret. The job provides for the family and gives them the dignity that money can buy.

Shama is glamorous and very attractive. Even while talking to me, she keeps checking her make-up and looks into her little mirror. She knows she is beautiful. She has the look of a woman who enjoys the attention of men. She is also about twenty-seven and married with kids. She is from Delhi. All of them are from poor families. They have studied till the third or fourth standards and then dropped out. Educating girls is considered unnecessary in poor Indian families. They will anyway get married and leave home. They are paraya dhan, - someone else's wealth. So they are taught housework.

All of them have been married off in their teens and their parents have rustled up huge amounts of dowry and elaborate wedding arrangements. Grown up, unmarried girls are not appreciated in Indian families and so when a girl is born all attention is directed to getting her a spouse. Unfortunately, all the three husbands have turned out to be useless, good for nothing jerks. They have spent the dowry and taken to drink, gambling and womanising. The girls are the only earning members in their families and, worse, they run the risk of contracting a sexual disease from their husbands!

I met these girls while talk was on about the impending ban on bargirls. They had read about it and heard about it and were obviously worried. What will you do if the bars really shut down, I ask. (As I write this, the bars have shut indefinitely). "We will have to go to other cities or somewhere else in Mumbai. We don't know what to do really. But something will have to be done. Whatever is written in our naseeb (destiny) will happen." They know that they can't dance forever and have to make quick money and bank it somewhere, possibly even start a small shop or enterprise. The sooner they do this the better. It all depends on how much money they have to kick-start a new venture. For now, prostitution is the only recourse and they recognise that fact. It is lucrative.

"We will have to take to dhandha," they tell me without sounding alarmed. They have obviously thought about it. "What else can we do? We have no other skill?" Some girls have made contacts with bar owners in neighbouring states. Some have also decided to move out of the country. The sex industry all over the world has sent feelers to the bar girls. Most of the girls are very attractive and dance exceptionally well. They are checking out options. The girls and their managers meet up frequently to discuss plans.

Their lives will be disrupted. Children's schooling, parents' medical treatment, new employers and clients, a new country altogether; every aspect of their lives will be turned upside down. It's a big move and they are very uncomfortable with it. But there is no choice. If they don't dance, fast and furious now, the wide net of everyday, unkind prostitution will eventually suck them into its intricate folds.

This article is extracted from Rajendar Menen's book "Karma Sutra: Essays from the Margin", published by Saga Books in February 2007.

URL for this article
http://indiatogether.org/karma-women