MEDIUM OF INSTRUCTION
Tripura promotes Kok-Borok in tribal schools
In 2005, the Education department of Tripura decided to give a push to Kok-Borok as a medium of instruction at the Junior Basic level to help tribal students learn in their mother tongue. Ratna Bharali Talukdar reports on the challenges as well as the gains from a strong focus on education in recent years in the state.
26 September 2007 -

The recitation, on the morning of 6 September, came to abrupt halt and all the 27 tiny tots, who were enjoying the number lessons on a red carpet, stared at me with their curious eyes when I entered the classroom, having obtained due permission from the headmaster. I tried to speak with the children, but didn't make any headway as they do not speak any language other than Kok-Borok. Still, they understood that I was asking them about their class, and without their teacher interpreting my questions for them, they were able to indicate that they loved their lessons.

Kushan Debbarma, the headmaster, says the introduction of Kok-Borok has definitely had a positive impact. For one thing, it has brought 164 tribal students to the school, who might otherwise not have enrolled. This is true state-wide; according to a report published by the TTAADC there has been an increase of 2.29 per cent tribal enrollment in the year 2006, compared to the previous year. Eight of Tripura's 19 major tribes speak Kok-Borok. Together, they comprise nearly 80 per cent of the total tribal population in the state, according to the Tribal Welfare Department. In 2001, the average literacy rate in the state was 73.20 per cent, while among the tribal population it was only 56.50 per cent.

Once a princely state, Tripura's 1400-year-long history of rule by tribal kings ended on 14 October 1949. The tribal people constituted the majority of the population till the early 1950s. However, following the partition of India, there has been a remarkable demographic change, with large-scale influx of non-tribal people from erstwhile East-Pakistan, present-day Bangladesh. According to the 2001 census, the tribal population accounted for only 31 per cent of the total.

In 2005, the Education department of the state decided to give a push to Kok-Borok as a medium of instruction at the Junior Basic level (Classes I to V), to help tribal students learn in their mother tongue. Tribals were also eager for the development of their mother tongue, culture and literature, and this too was a factor in deciding to introdue Kok-Borok instruction, says A K Reang, additional state project Director, Sarba Siksha Abhijan (SSA).

The Higher Education minister Keshab Majumdar, is optimistic that tribal students will learn better, with the introduction of Kok-Borok. "We have decided to introduce it as a medium of instruction at Junior Basic level in tribal areas so that tribal children of the state enjoy their constitutional right of having education in their own language. Simultaneously, we want to encourage parents to send their children to school," the minister says. The minister adds that efforts are on to introduce the language as a medium of instruction at the Senior Basic level too. 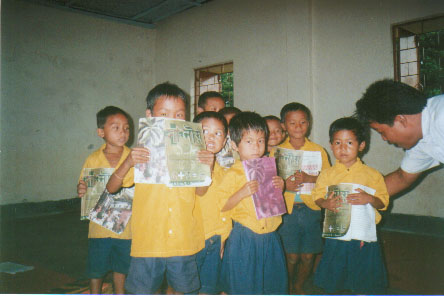 This is not the first move by the department to introduce Kok-Borok; the language was recognised as the second official language of the state way back in January 1979 after the CPI(M)-led Left Front government first came to power in the state. Immediately thereafter, the government established a Kok-Borok Advisory Board under the chairmanship of Ramcharan Debbarma, an eminent Kok-Borok writer, to usher in the development of the language. The government had also set up a Tribal Language Cell in the Education department; B K Goswami, who was the first head of the cell, was instrumental in introducing Kok-Borok as a medium of instruction in about 1200 Junior Basic schools of the state during the year 1981. Kok-Borok was also introduced as an alternative subject at higher education level.

However, a controversy arose over the script to be used, since Kok-Borok lacks its own script, and this virtually stalled the department in 1988. While the state government used the Bengali script for the language - this had been the custom for a long period - a section of tribal people demanded the introduction of the Roman script for their language. Although the controversy is still continuing, the government has persisted with the Bengali script.

The lack of qualified teachers has been a problem; the shortage has meant that Kok-Borok has been introduced only as an alternate subject in 20 higher secondary schools. There are also only two Higher Secondary schools, one in Khowai in West Tripura district, and another in Agartala, where all subjects are taught in Kok-Borok, but the teachers here obtained their own degrees in other languages. No university courses are taught in Kok-Borok, but a diploma course in the language is available at Tripura University, the only university in the state.

The Education department has urged non-Kok-Borok speakers to learn the language. "This has worked to some extent. In my jurisdiction, there are 84 Junior Basic schools and I can name at least six non Kok-Borok teachers, who can fluently speak and teach in Kok-Borok," says Sudip Debbarma, Inspector of Schools in Khumlwng.

The lack of qualified teachers has been a problem; the shortage has meant that Kok-Borok has been introduced only as an alternate subject in 20 higher secondary schools.

Language development is important to the state's efforts to teach in Kok-Borok. "The TTAADC has set up a Language Cell that has organised series of terminology workshops involving eminent writers of the language," says Amandwip Debbarma, Principal Officer, Education, TTAADC. "Altogether 400 new Kok-Borok words were finalised last year, in accordance with the recommendations of these workshops. This year another 600 words will be added. Other works of the cell include: publication of some books in the language; translation works; opening a book museum; and preparing a documentary CD to mark the recognition of Kok-Borok as second state language," he adds.

There are other related problems too. Since tribal children are imparted teaching in Kok-Borok only at the Junior Basic level, the transition to upper primary levels, where they are taught in Bengali, is proving difficult. This is dissuading some parents from sending their children to Kok-Borok schools. A K Reang says teaching in the language would have the desired impacts only when it is extended to the upper primary level.

Besides its focus on Kok-Borok, the education department has simultaneously come up with a number of innovative steps, starting with funding. The government has accorded education top priority, and allocated 16 per cent of the entire state budget to education. There is also an ongoing effort to establish at least one lower primary school within a one kilometre radius of all inhabitations, an upper primary school within a three kilometre radius, a high school within a five kilometre radius, and a college within 25-30 kilometres. This has resulted in mushrooming of government educational institutions throughout the state. Between 2001-02 and 2006-07, the number of upper primary schools rose from 426 to 1021, and higher secondary schools from 235 to 290. The state is also stressing the provision of concrete buildings for all schools, with proper infrastructure including sanitation and drinking water facilities.

These efforts are starting to show impressive results. A Department of Social Welfare and Social Education report reveals that as per the survey of Indian statistical Institute, Kolkata the literacy rate had risen to 80 per cent in September 2006, an increase of nearly 7 per cent in the five years leading up to that time. The drop-out rates at primary and upper primary levels too have declined sharply; at the primary level, it has come down to 11.60 per cent in 2006-07 from 50.42 per cent in 2001-02. During this period, it has come down to 21.42 per cent from 67.95 per cent at Upper Primary (Class-VI to Class VIII) level. Efforts by the Education department to systematically track and rehabilitate drop-outs has reduced the number of out-of-schools students to 4093 in July 2007 from 93,971 in 2001-02. With such startling progress, the Education department believes that 100 per cent literacy and a zero drop-out rate are both achievable.

There have been other changes too. In August this year, responsibility for primary education has been transferred to Panchayats in non-tribal areas, and to TTAADC in tribal areas, to bring a higher degree of accountability in the administration of public education. The government has also adopted a Rs.186 crore gender budget in 2007-08 for spearheading girls' education - through grants for dresses and enrollment, stipends, a mid-day meal scheme for girls in schools, admission fees in different institutions, scholarships and and stipends for girls' higher education.

URL for this article
http://indiatogether.org/kokborok-education