OBITUARY
The honest leftist
K Balagopal refused to accept, from either State or Maoist, the justification of "a culture and mentality which celebrates power and use of force in society", writes Ramachandra Guha.
15 November 2009 -

The short answer is that they aren't, and haven't been, silent. There are very many intellectuals and rights activists who have regularly condemned - in newspapers as well as in specialist journals - Maoist methods such as the recruitment of juveniles as militants, the indiscriminate use of landmines, the killings of alleged informers, and the murders of forest guards and police constables who cannot, by any stretch of the imagination, be dubbed 'class enemies'.

It may just be that Chidambaram is new to the job, and that in his previous assignments his reading chiefly consisted of business magazines and stock market reports. It seems that he has been ill served by his assistants, who are paid precisely to avoid their ministers making such obvious factual mistakes in public.

If this assumption is correct, then the deficiencies can be remedied easily enough by the home minister being asked to read the writings of an intellectual who died the very week of his Palkhivala lecture. His name was K Balagopal. Balagopal was described (by a younger friend) as "the conscience of the collective self known as Andhra society" - with reason, as for 30 years and more his chief focus of work and writing had been the politics and culture of his home state.

However, he was revered outside Andhra Pradesh too - in Kashmir, which he once referred to as the "only foreign country I have visited"; in Chhattisgarh, where he was among the first to document the excesses of the vigilante movement that goes under the name of Salwa Judum; in Delhi, Mumbai, Bangalore, Chennai and other cities, where his work for human rights was admired by those who sought to emulate him while knowing that they could never match his intellectual originality or his physical and moral courage.

Indians active in human rights usually come from a humanistic background - they are most often lawyers, social scientists, or journalists. Among the exceptions are the man who founded the first human rights organization in independent India - the engineer, Kapil Bhattacharya - and Balagopal. After taking a PhD in mathematics from Warangal, Balagopal taught for several years at Kakatiya University. Then, in the mid-1980s, he was forced to quit his job, and turned to working fulltime on civil liberties. In the late 1990s he acquired a law degree; now, his vocation complemented his activism, for the cases he fought in court were usually on behalf of subaltern groups victimised or harassed by the State.

In person, Balagopal could appear forbiddingly austere. Small talk and invocation of common friends got one nowhere - as I discovered when we were once placed on a panel together. But it was enough to hear him speak, and more so, to read him in print. His fellow Andhras read him in Telugu; the rest of us, in the Economic and Political Weekly, where he wrote regularly from the early 1980s until his death. His English prose was direct and economical - as befitting a mathematician, although I am told that in his own language he would allow himself an occasional flourish, as befitting the grandson of a major Telugu poet. 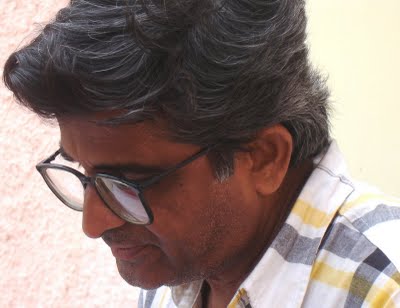 In the late 1990s he acquired a law degree; now, his vocation complemented his activism, for the cases he fought in court were usually on behalf of subaltern groups victimised or harassed by the State. (Photo source: www.peoplesrights.in)

Like some others of his generation, Balagopal was powerfully shaped by the Emergency, against whose authoritarian excesses it was then automatic to juxtapose the youthful idealism of the Naxalites. And it was undeniably the case that in his native Andhra only the Naxalites worked among the very poor - such as the sharecroppers and landless labourers of Telengana, and the poor and often destitute tribals of the Agency areas.

Over the years, Balagopal arrived at a less romantic view of the Naxalites. He deplored their cult of violence in articles in English and, perhaps more effectively, in articles in Telugu that were directed at and read by the objects of his criticism. In the late 1990s, he wrote a brilliant essay that anatomized the means, foul and often brutal, used by Maoists to enhance their power and dominance over recalcitrant individuals and groups. (In what follows, I rely on a translation by the historian Rajagopal Vakulabharanam.) Here Balagopal dealt in detail with various cases of harassment, intimidation and murder practised by Maoist groups in Andhra Pradesh.

He wrote that "we should publicly interrogate those who claim for themselves the right to kill for the sake of 'progress' and the wisdom to define what is progress. We need not hesitate to critique those who do not hesitate to usurp the rights of others, including their right to live, for the sake of revolution". "[If] Naxalites had any respect for the humanistic values or the sentiments of those close to whom they kill," he remarked, "they will not kill them by smashing their faces in such a way that they are virtually unrecognizable."

To be sure, Balagopal also wrote often (and perhaps more often) of crimes and errors on the other side, of how the police and paramilitary brutalised innocent citizens in the name of Law and Order, of how politicians and industrialists seized the land of poor peasants in the name of promoting 'Development' while in fact lining their own pockets. In his last years, he was particularly active in opposing the acquistion of farmland for special economic zones in Andhra Pradesh. In sum, Balagopal refused to accept, from either State or Maoist, the justification of "a culture and mentality which celebrates power and use of force in society".

Balagopal was that altogether rare animal, a genuinely independent Indian intellectual, whose moral clarity and commitment to the truth meant that he could not resort to special pleading for any party or interest. The flawed institutions of our imperfect democracy were all subject to his rigorous scanner - the police, the judiciary, the bureaucracy, and not least, corrupt and authoritarian politicians.

When Y.S. Rajasekhar Reddy was first elected chief minister, Balagopal wrote that while a pliant media sought to clothe him with "the image of a good doctor who has turned to politics to cure society", in truth YSR was "anything but a vendor of humane visages. His rise to power has been accompanied by more bloodshed than that of any other politician in this state". As it happens, he was also among the first to see through YSR's predecessor, pointing out that "Chandrababu [Naidu] is merely an ambitious political schemer who has managed to con quite a lot of intelligent people because he knows their hunger for the image he has put on - a third world politician in the mould of a corporate executive spewing IT jargon and the verbiage of the World Bank's development policy prejudices - is too acute for the normal functioning of their other senses".

Those concerned with the security of the State often criticise human rights workers for living in an ivory tower, for not knowing the law, and for making excuses for the Naxalites. When (or if) made against Balagopal, none of these charges held any water. He knew rural India intimately: a tireless fieldworker, he had explored, on foot or in crowded buses, almost every district of Andhra as well as many districts in Chhattisgarh, Orissa, and Kashmir. He was extremely well acquainted with the Indian Penal Code as well as the Constitution, and hence could pinpoint how, and in what measure, the State had violated its own laws. And no one could accuse him of being a Maoist apologist.

His friends and readers shall mourn Balagopal's death, at the comparatively young age of fifty-seven. On the other hand, the ideologues and leaders of the Maoist movement are probably quite relieved at his passing. That caveat 'probably' can be dispensed with when it comes to the Andhra police, Andhra politicians, and the Union home ministry. For the most credible critic of their crimes and impunities has unexpectedly been removed from their midst.

URL for this article
http://indiatogether.org/leftist-op-ed