Zareer Masani's book is enriched by its narration of the contrast between Macaulay's strong likes and dislikes in personal life and his libertarian streak in public affairs. R Rajagopalan reviews Macaulay.

In that sense, Macaulay is the intellectual father of the paternalistic interventions by Western powers that is going on even today. And as an Indian of today, one may admire or hate Macaulay, but one cannot ignore him; we are all 'Macaulay's children'. What is the secret of his lasting Indian legacy? How did he break through the class-conscious British society? How did he do so much at such a young age? 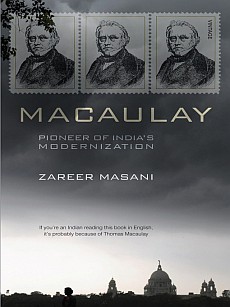 He cleverly shepherded his agenda for westernizing Indian education, outlined in the famous 'Macaulay minutes'. He defeated the so-called orientalists back home in Britain, who advocated preserving the culture and educational practices of the Asiatic societies. He did a phenomenal job of drafting the Indian Penal Code and had the patience to see it through. He was emphatic about testing the depth of knowledge in any one of a broad range of fields before appointing civil servants, a practice we follow to this day. This is in contrast to the other entrance examinations emphasizing surface level acquaintance with a broad range of subjects, encouraging the quiz-wizards who have quick answers.

All in all, an excellent read for anyone who wants to appreciate the making of modern India. The author Zareer Masani is himself a true 'son of Macaulay' - having studied in an elite English medium school of Bombay, an important legacy of Macaulay. His father Minoo Masani was a very active freedom fighter and a prolific contributor to post-independence politics as a conscience keeper, taking positions across the entire right-left spectrum. He had been a member of the Communist party at one end and then of the Swatantra party at the other extreme, and in between, like most freedom fighters in Indian national Congress too. No surprise, then, that this author of several earlier bestsellers and critically acclaimed tomes has managed to achieve such a nuanced biography of Macaulay.

URL for this article
http://indiatogether.org/macaulay-reviews