WATER HARVESTING
Upper catchment, gains in the plains
By building tanks to catch run-off in the higher reaches of the land, a Karnataka farmer reaps the benefit of a higher water table in the lower areas. In doing so, he remembers that this was the practice for a long time in this area, and he has simply recalled an old tradition. Shree Padre reports.
23 September 2007 - 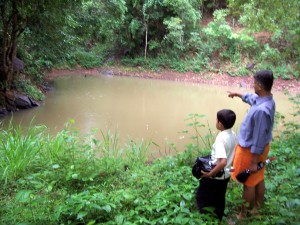 Shree Padre is a journalist with many years of experience in agricultural reporting. He is the author of several books, including one on rainwater harvesting, published by Altermedia. Gururaj can be contacted by phone at 92426 06747 or 94489 76884.

URL for this article
http://indiatogether.org/madaka-environment