TAMILNADU'S PARADOX
Alarming malnutrition pushing children out of school - I
Tamilnadu leads the country in nutritional interventions and yet has alarming levels of hunger in children. Research indicates that is a very likely cause of poor schooling achievement and drop-out rates, reports Krithika Ramalingam.
21 June 2009 -

Despite several schemes, chronic malnutrition persists in Tamilnadu and this is very likely a major cause for continuing poor performance and high dropout rates of children in Tamilnadus government schools. Ironically, the state leads the country in nutritional interventions and has improved its standing in comparison to other states in the last two decades since the scaling up of nutrition schemes. Yet, nutritional status have only marginally improved and in some cases like the anaemia count going up, perplexing activists, policy researchers, and funding organisations.

The state is a study in contradictions: It gave the country its direct nutrition intervention in the form of the Noon-meal Programme (NMP), and yet has alarming levels of hunger, according to the International Food Policy Research Institute's India State Hunger Index (ISHI) of 2008. The index gave the state this rating from a choice of: low, moderate, serious (6 states), alarming (10 states including TN), extremely alarming (Madhya Pradesh). The ratings are based on the prevalence of calorie-energy deficiency, child mortality and the number of children below the age of 5 who are underweight. 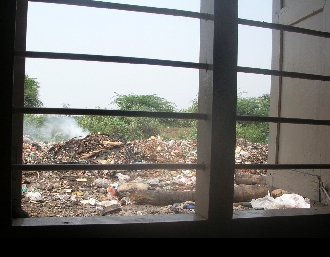 View from the Chitlapakkam Panchayat Middle School in the St Thomas Mount Panchayat Union area, a few kilometres south-west of Chennai. The searing smell from burning and rotting garbage, animal and human excrement accompany the learning atmosphere in the school. Pic: Krithika Ramalingam.

One out of every three persons ate less than 1,632 calories a day (much lower than the national Below Poverty Line cutoff of 2,100 calories) in Tamilnadu. Every third child below the age of 5 in the state is underweight (low weight for age) and the under 5 mortality rate of is 3.5 per 100 births.

The National Family Health Survey data of 2008 show a similar trend: Almost one-third (31 per cent) of children under age five in Tamilnadu are stunted, or too short for their age, which indicates that they have been undernourished for some time; 22 percent are wasted, or too thin for their height, which may result from inadequate recent food intake or recent illness and 30 per cent are underweight, which takes into account both chronic and acute undernutrition.

Seven out of every 10 children below the age of 5 have iron-deficiency anaemia (IDA) according to the NFHS. IDA has actually increased from 69 to 73 percent in the 0-3 age group from the last survey of 1998. Only 40 per cent of the households have access to adequately iodised salt and Vitamin A deficiency persisted despite prevention programmes.

The effects of such acute and chronic undernutrition are well established. Increased mortality, poor cognitive and motor development and other impairments in function as fallout of undernutrition, show Dr Stuart Gillespie and Dr Lawrence J Haddad of IFPRI in their book The Double Burden of Malnutrition: Causes, Consequences and Solution. Children who have been severely undernourished in early childhood suffer a later reduction in IQ by as many as 15 points (Martorell 1996), significantly affecting schooling achievement and increasing the risks of drop-out or repeat grades.

Impact of stopping noon meals for over-14

Activists of Right to Food (Tamilnadu) also chalk up a higher drop out rate of close to 40 per cent in the higher classes also to the cessation of noon meal schemes after the age of 14. S Kanniyan, RTF-TN convenor, says with decrease in agricultural work in the villages, more and more women have taken up contract work in construction industry. Many children no longer have breakfast because their mothers need to be at work early in the day. Classroom hunger is a serious cause of concern. When the child comes hungry to school, her learning is going to be impacted. Often teachers do not understand the reasons for poor scholastic achievements and instead punish the students; which only pushes the child into dropping out, he said.

The noon meal is made available in higher secondary classes only to students belonging to MBC, SC/ST castes. Often older children are ashamed of the caste and socio-economic status identification their noon meal plates accord them and prefer to skip the meal altogether, says Aruna Rathnam, Education specialist, UNICEF. Younger children are more enthusiastic about noon meals, especially since the introduction of eggs two times a week, because of hunger. For adolescents, the lunch hour becomes a question of peer acceptance and socialisation. Many students prefer to eat packaged food of poor nutritive value to the prepared meals in schools," she says.

Even in the below 14 category, the efficiency has come under question. A review of Tamilnadu's Noon-meal programme (NMP) implementation shows that the per-day-per-child expenditure is 35 paise, for vegetable, condiments and salt. TN FORCES, an NGO that works throughout the state with day cares and crèches, says vegetables or oil or other seasoning are often not present in the Anganwadi centres. Sometimes even salt is brought from the home of the beneficiaries. TN FORCES is the state wing of Delhi-based FORCES.

K Shanmughavelayutham, TN FORCES convenor says that only two-thirds of children who are eligible for the nutritious meal scheme get coverage. Despite that, the nutrition schemes are unable to meet the needs and the government should commit at least 3 percent of the budget for nutrition, he says.

Both Right To Food and TN FORCES have been seeking an improvement in infrastructure and quality of food given to children. After the death of a child in Melvalampettai Higher Secondary School after a vessel holding hot sambar toppled onto him, we sought improvements to NMP kitchens in schools. A committee that inquired into the incident that happened in 2006, said NMP urgently needed upgraded, smokeless kitchen and a safe serving/eating area. The improvements have been slow in coming.

Nutritionally too, the scheme needs a re-think. Rice that is used is from the Civil Supplies department and is so heavily processed that it is shorn of all nutrients other than starch. The only other food children get is red gram (masoor dhal) in the sambar, not even oil. The meal, though supposedly provides one third the calorie need of the child, does little else in the form of minerals or vitamins," they say.

Tackling the challenge of Anaemia

Another issue that has the child health organisations worried is that of iron deficiency anaemia (IDA). According to NFHS-3, in the below 5 years group, a majority -- 64 percent  is anaemic. This includes 27 percent who are mildly anaemic, 35 percent moderately anaemic, and 3 percent with severe anaemia. Children of mothers who have anaemia are much more likely to be anaemic themselves. And in the state, those numbers are also of concern: various health surveys put that between 53 and 69 percent for pregnant women. 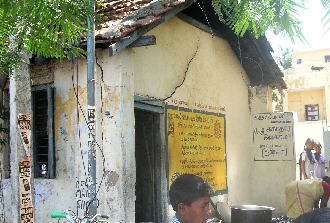 The noonmeal centre at the Adi Dravida Welfare School in Palavakkam is a dilapidated structure. Food is served outside, very close to the East Coast Road highway, without adequate safety measures for the children. Children line up on the pedestrian walk with their plates to take food from the hot vessels placed open to the elements. They then disperse to eat near the playground which is in the inner perimeter and come out later to wash their plates, right on the pedestrian walk. Pic: Krithika Ramalingam.

Dr Devashish Dutta, Specialist in charge of Health, UNICEF office for Tamilnadu and Kerala says maternal anaemia impacts maternal mortality. It could also lead to pre-term deliveries, abortions and growth retardation with nutrition to the unborn baby being less than sufficient, he says. Anaemia reduces the capacity of the baby to survive, through diminished immunity, poor growth and development. Poor immunity leads to the child falling ill often, which in turn impacts her nutritional status leading to further reduced growth and immunity, and hence more illness and so on. When the child grows up to have children, the vicious cycle of anaemia leading to low birth weight, poor immunity, frequent illnesses, retarded growth, development and malnutrition is repeated," says Dr Dutta.

Gillespie and Goddad, in their book, further aver: Infants with low birth weight are born with low iron stores, depleted by two to three months. Because breast milk cannot meet their iron requirements, it should be supplemented with iron starting at two months of age....

Unfortunately, the under-five group is outside the purview of the IDA prevention programme in Tamilnadu, that focus on adolescent girls and pregnant women. Nor have issues like links between poor iron absorption and Vitamin A deficiency and worm infestation been integrated into the scheme.

Protein deficiency in the diet can also cause anaemia, given that iron binds with a protein called globulin. Often more than one deficiency co-exists indicating that the nature and quantity of food available or feeding practices were poor," says Dr Dutta.

Even in the case of adolescent girls who receive the weekly supplementation of Iron and Folic Acid tablets, activists are not happy. A daily supplementation dose will not have as many side-effects as the weekly dosing, which are often accompanied by black stools, gastro-intestinal discomfort, and malaise. Ideally, the supplement is had in the night after dinner with another food with vitamin C like lime juice or sweet oranges. But the government has asked us to ensure that the IFA is taken in our presence, so we give it with the noon meals. Occasionally, some girls feel nauseous or vomit after taking the tablets. Then encouraging others to consume it becomes an issue," says S Tamilazhagi (name changed to protect identity), an Anganwadi supervisor in St Thomas Mount Panchayat union, that abuts Chennai Metropolitan area to the west.

Some anganwadi workers who are involved in distributing IFA tablets in neighbouring Kancheepuram and Thiruvallur districts say the supply has been erratic over the past two years and others allege that after initial testing of haemoglobin levels in 2005-2006, the government has subsequently failed to study the impact of the programme.

The distribution of tablets or testing for haemoglobin levels depend on the initiative of the VHNs and Anganwadi workers. Often the service delivery is interrupted because of government chooses to implement other non-nutrition related schemes through us. For example, we are also to talk to the adolescent group about nutrition, reproductive health, menstrual hygiene and entrepreneurship development," says N Gomathi, a leader in the TN VHN Association.

Krithika Ramalingam is a Chennai-based development journalist. This article is part of a series on education sponsored by Confederation of Indian Organisations for Service and Advocacy, a not-for-profit Tamilnadu-based organisation.

URL for this article
http://indiatogether.org/malnutr1-health