MANUAL SCAVENGING
A change in an inhuman tradition
Women of the Muslim Haila community in Madhya Pradesh continue to be manual scavengers and are subjected to inhuman treatment despite the law prohibiting it. But they are now determinedly fighting back, reports Shuriah Niazi.
21 July 2008 -

Ujjain (WFS) - Rehana, 42, of Tarana village in Ujjain district in Madhya Pradesh (MP), was married at the age of 14. Like other girls she too had dreamt of a happy life after marriage. But on moving into her marital home, the young bride found that she was considered amongst the lowest of the low in the community and was even excluded from public activities and social festivities. By marrying Arshad, Rehana had become a Haila - the traditional carrier of night soil.

Much to her disgust, Rehana was forced by her mother-in-law and husband to take up the occupation. Every morning she had to visit the allotted homes to clean up dry latrines with the help of a broom and tin plate and carry away the night soil on a wicker basket placed on her head. She would then dispose the waste at a specified area some distance away. 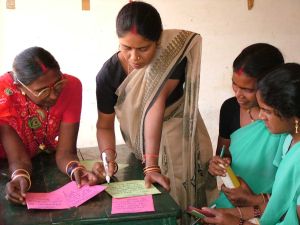 Rehana worked as a night soil carrier before she quit her degrading profession. Pic: WFS.

Her payment from each house was one 'roti' (flat bread) a day and some money. "I did not like all this. People did not treat us on equal terms and didn't talk to us with respect. But we were forced to do this work in order to make both ends meet."

Owing to the rigid caste-based social structure, the Muslim Haila community in Madhya Pradesh is treated like 'untouchables', subjected to inhuman treatment and exclusion from public participation. Officially, they belong to the Other Backward Class (OBC) category. They are also deprived of access to most public resources and live like outcasts.

The Haila community continues to suffer these indignities despite the fact that the degrading practice of cleaning dry latrines and transporting human excreta manually has been officially banned since 1993. The Employment of Manual Scavengers and Construction of Dry Latrines (Prohibition) Act, 1993, makes the employment of scavengers or the construction of dry latrines that are not connected to a drainage system a punishable offence.

Yet, in several parts of MP, the practice continues to this day and, unfortunately, over 90 per cent of those who work as night soil carriers are women. The men either work as sanitation workers with the Nagar Panchayat or as labourers. Most of the women are illiterate. According to Asif, who works among the Haila community, the literacy rate within the community would be around five per cent to 10 per cent. The women earn anywhere between Rs.5 to Rs.7 per house a day, along with the one 'roti'.

There are around 1,200 Haila families in the state, mostly in Ujjain, Dharm Shahdole, Dewas and Khandwa. Although there is no caste system in Islam, the Haila Muslims are victims of caste-based discrimination common to other communities of the area. But it is the Haila women who suffer the most. Doubly discriminated because of their gender and low social status, they sometimes even have to face sexual harassment.

But change is in the air. These women are beginning to protest, revealing in the process a determination and courage that lay hidden during all these years of repression.

Rehana was the first to raise her voice against the offensive occupation and made up her mind to give it up. "My daughter would always tell me to quit this work. Although people did not approve of my decision, my daughter kept encouraging me and I decided to walk out of my mother-in-law's home," she says. In the beginning, she had to face the wrath of her community. But Rehana remained steadfast. Eventually the critics came around and even her husband, Arhshad, joined his wife in her new home. Today, Rehana earns a living by sewing clothes.

"In Islam there is no place for discrimination on the basis of caste or work. There is need for the local 'maulvis' (clerics) to come forward and teach people correctly about the basic principles of Islam."
- Bhopal Nayab (Additional) Qazi Amirullah Khan

•  The curse of manual scavenging
•  No end to a shameful practice

Defying social pressure and an age-old social practice was not easy, admits a victorious Rehana today. But it has all been worth it. Life has changed completely, and she does not now face the humiliation and discrimination that was once her lot. "My daughter got married recently. A large number of people attended the marriage ceremony. Hardly anyone would have come to my home had I continued with the old work."

Rehana now encourages other women of her community to seek better sources of livelihood. "The honour of a person is most important. You gain nothing in this work. It is better to give it up," reasons this torchbearer.

Taslim, of Kaytha village, who is around 40, understands the tribulations that Rehana has endured. A prisoner of societal and familial pressure, Taslim was forced to continue being a manual scavenger. Her family threatened to throw her out of the house if she dared desist. "If you do any other work you will have to work in the company of men. Women of our community carry night soil and stay at home. We shall leave you if you refuse. Don't play with our honour," threatened her family members.

But Taslim found support in Garima Abhiyan, a social organisation working with people who carry night soil. Members of Garima Abhiyan first tried to persuade her family to opt for another profession. When their counselling efforts fell on deaf ears, they explained to Taslim that no one could force her to do this work if she didn't want to do it.

A determined Taslim then turned her back on the family occupation and gradually her relatives learned to appreciate her decision. "We feel that life is much better than before. We can live freely with respect," says Taslim, now the district convenor of the Garima Abhiyan in Ujjain. 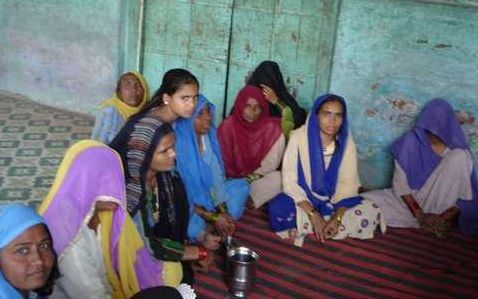 Women of the Haila community are trying to better their situation with the help of social organisations. Pic: WFS.

Ali Hussain, 29, who hails from a practising Haila family, explains, "It is not an easy task to persuade the women to give up this custom. There is so much social pressure on them."

But women like Rehana and Taslim have scripted a new story, and have courageously fought for their social and economic empowerment. Encouraging them to raise their voice against discrimination are people like Bhopal Nayab (Additional) Qazi Amirullah Khan. He says, "In Islam there is no place for discrimination on the basis of caste or work. There is need for the local 'maulvis' (clerics) to come forward and teach people correctly about the basic principles of Islam."

Of course, there are some initiatives by the government as well. There's The Self-Employment Scheme for Rehabilitation of Manual Scavengers that was launched last year. Its object is to assist scavengers and rehabilitate them in alternative occupations/trades in a time bound manner by March 2009.

URL for this article
http://indiatogether.org/manual-women