ENVIRONMENT
Will Mittal Steel be a raw deal for Orissa?
With Mittal Steel moving into India, it becomes even more important to look at the firm's poor environmental and social track record around the world in its rise to become the world's largest steel maker. There are crucial lessons for the governments of Orissa and Jharkhand, but are they listening, asks Sunita Dubey.
08 August 2007 -

Laxmi N Mittal, the Chairman of Arcelor Mittal, the largest steel company in the world has come to his country of birth to set up two steel plants in Jharkhand and Orissa of 12 million tonnes capacity eachand an investment of approximately 18 billion dollars. Although the deal with Jharkhand has run into a hurdle over mining lease, the politicians and bureaucratsfrom Delhi to Bhubaneswarhave given him a red carpet welcome in anticipation of huge investments. 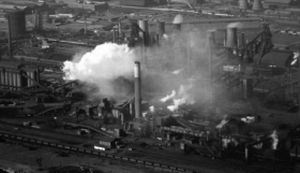 Mittal Steel Plant, Vaal Triangle, South Africa. Even as Mittal was negotiating a deal with the Orissa government in India with a promise of environmental and social compliance, the South African government began a criminal investigation into Arcelor Mittal's malpractice at another Mittal plant there. Pic: Groundwork.

With Mittal Steel moving into India, it becomes even more important to look at the kinds of practices adopted for the firm's rise from a small family business to the world's largest steel company, operating 61 plants in 27 countries. Not surprisingly, the company has come under scrutiny worldwide already. The company's success has been primarily based on buying up old state owned steel factories in places like Trinidad, Mexico, Poland, Romania and Algeria throughout the 1980s and '90s at very cheap prices in nations with weak or nonexistent unions and environmental and human rights norms, reported the MSNBC in February 2007.

Mittal Steel is also known for buying political influence in acquiring steel assets in other countries. For example, former British Prime Minister Tony Blair, intervened to help Mittal steel buy a giant Romanian steel company a month after the tycoon donated 10 crores (£125,000) to the Labour Party. In an extraordinary letter, Blair told Romania's prime minister that selling his biggest state-owned enterprise to Laxmi Mittal, would enhance the country's chances of joining the European Union, according to an October 2002 report in the The Telegraph.

Even Indian politicians were not far behind in supporting Mittal in its acquisition of Arcelor, the second largest steel company in the world in 2006. Commerce Minister, Kamal Nath, wrote to the European Union arguing for the acquisition. The prime minister Manmohan Singh ended up taking this issue with visiting French President, who was initially critical of this deal because of the anticipated job cuts in France and other parts of Europe.

Arcelor Mittal is all set to invest approximately Rs.40,000 crores (approximately US$9 billion) to build an integrated steel plant with a total annual capacity of 12 million tonnes in the iron-rich Keonjhar district, the company says on its website. According to the memorandum of understanding (MoU) signed on 21 December 2006 the plan consists of building coke oven, steel making, rolling mills, and a 750 MW captive power plant.

Mittal has asked for 8,000 acres of land at the proposed location: 6,000 acres for the plant, 1,000 acres for a power plant, and 1,000 acres for a township, according to press reports. The land requirement is almost double the size of the land sought by Posco a South Korean Steel Company, which just received an environmental clearance for setting up a steel plant of similar capacity at Paradip, Orissa. Mittal Steel claims that the excess land is needed for its future expansion plans.

Orissa's tryst with steel does not just end at these two mega steel plants. In the last two years, Orissa government has signed about 40 steel plant proposals in the state. A projected 44 million tonne capacity is expected to be built in Orissa, with a massive investment of about Rs.108,000 crores. Out of these, five major national and international players alone are pumping in Rs.95,400 crore to build a capacity of 32.5 million tonnes, says the state government.

Mittal Steel has sought a special economic zone (SEZ) status for its plan. If granted, it will not only result in substantial tax savings, but also would give Mittal the leeway to bypass many environmental regulations. Under the garb of corporate social responsibility, the steel company has pledged its support to the community and appointed a consultant, the New Delhi-based IL&FS EcoSmart Ltd. to do a socio-economic survey and prepare the Relief and Rehabilitation (R&R) package for the project affected people. EcoSmart provides resettlement support services for the World Bank-funded Mumbai Urban Transport Project (MUTP). However, based on the Bank's own Inspection Panel report documenting the abysmal rehabilitation and resettlement of the project, the World Bank had withheld upcoming installments to the project. This is the track record of the company hired by Mittal for their own project's R&R.

Mittal admitted to the Ohio Environmental Protection Authority that the plant spewed 3.2 million pounds of pollution more than its 2005 emission of 41.0 million pounds, into the air over Cleveland in 2006. The emissions include carbon dioxide, soot, volatile organic compounds, and lead.

Meanwhile, Sanak Mishra, CEO of Mittal India operations, says that "the company would take the Orissa government's R&R policy as a guideline for the package". The problem lies in the very fact that R&R policy of Orissa government is already marred with problems like failure to ensure employment guarantees for the displaced. The onus is on company to employ the displaced. The policy also remains silent about the government's role in cases where people do not want to be displaced by the industrial projects, according a Down to Earth report.

The danger for India is that Mittal Steel has a global reputation of having no regard for environment, communities and fair labour practices in countries where it operates steel mills, such as Ireland, Mexico, Romania, Poland, South Africa, United States, etc.

In South Africa, the communities are fighting against Mittal Steel's pollution as well as intimidation against families who have refused to sell their land for their expansion plan. Even as Mittal was negotiating a deal with the Orissa government in India with a promise of environmental and social compliance, the South African government began a criminal investigation into Arcelor Mittal's malpractice at their Vereeniging plant for continued dumping of hazardous waste at an unauthorised site, despite repeated instructions to stop.

A July 2007 investigation detailed environmental and legal contraventions, and significant pollution of surface and groundwater with phenols, iron, oil, fluoride and other hazardous substances.

In September 2006, 41 miners died in Arcelor Mittal-owned Lenin coalmines in Kazakhstan and meanwhile the workers went on strike demanding pay raises and improved safety. Workers have also alleged that Arcelor Mittal has done little to improve labour and safety conditions since taking over Kazakhstan's largest metal factory and its associated mines, according to a report in the International Herald Tribune.

What's more, Mittal's flouting of environmental and labour norms is not limited to just developing countries. Even in the US, the company has provoked regulatory action and citizen protests. In August 2006, the US EPA cited Mittal Steel USA Inc. for alleged clean-air violations at the company's steel mill in Indiana, stating that Mittal modified a coke oven battery that resulted in a significant increase in sulfur dioxide emissions, without getting a state permit. The state requires the best available technology to control the emissions. 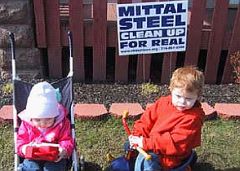 At an Ohio steel plant, which Mittal Steel took over in 2005, local communities are up in arms over the high levels of pollution and related health problems. Since the takeover, the pollution record of the Ohio plant has deteriorated  they quietly admitted to the Ohio EPA that the plant spewed 3.2 million pounds of pollution more than its 2005 emission of 41.0 million pounds, into the air over the city of Cleveland in 2006. The emissions include carbon dioxide, soot, volatile organic compounds, and lead.

Mittal's record of addressing public grievances has also been awful. Laxmi Mittal and his CEOs in the US have continuously denied the communities' demand to engage with the public in Ohio despite citizens sending 24,500 personal, handwritten letters and petitions.

Just weeks after the MoU between Orissa government and Arcelor Mittal was signed, the people of Keonjhar started protesting against the deal. Taking note of the plight of other communities evicted due to a myriad of development projects in Orissa, people are not ready to give away their lands, which is often their only source of livelihood. Angry villagers from 17 villages have also demonstrated in front of Keonjhar District Collector's office demanding that their land should not be acquired for the Mittal steel plant. The land sought for the project is a multi-crop, fertile, and irrigated agricultural land. The voice of these people is strong, and it is likely that they will not give up their land easily, which will be a problem for both the Orissa government and Mittal.

For its part, the Orissa government has so far paid more attention to the Mittal's possible investment than its well-established record of flouting environmental and social norms. If the government tries to force Arcelor Mittal Steel on its people, it may once again face a situation like Kalinganagar. The tribal people of Orissa, who are poor and are always asked to move and give up their livelihood, will not hesitate to resist -- because they are being left with no choice. It is yet to be seen whether the Orissa government has learned anything at all about its people and their will.

Sunita Dubey is based in Boston and is a coordinator of Groundwork, which works on environmental justice issues in South Africa.

URL for this article
http://indiatogether.org/mittal-environment