ELECTIONS 2014
NaMo-RaGa brand war drowns out Assam’s cries
The ruling government has seen limited success in some areas, but the state's lingering needs seem to have been forgotten in the war of personalities ahead of the looming parliamentary elections. Ratna Bharali Talukdar has more.
20 March 2014 -

Nearly 1.87 crore voters in Assam had been hoping that political parties and candidates would focus on the genuine issues of price-rise, corruption, lack of employment avenues, non-remunerative agriculture, at least on the eve of the parliamentary elections.

However, electoral discourse in Assam, as in the country at large, has been reduced to a contest akin to one between two corporate entities trying to position their brands. The only difference here is that these are political parties pushing forward their brands, namely NAMO (Narendra Modi) and RAGA (Rahul Gandhi).

The scripted rhetoric between the Bharatiya Janata Party’s (BJP) prime ministerial candidate Narendra Modi and Congress vice-president Rahul Gandhi has overshadowed people’s issues like poverty, food security and livelihood crisis in this poverty-stricken, conflict-ridden and development deficit state. It has denied voters in Assam an opportunity to decide their mandate on the basis of actual performances and promises of the rival parties on these real issues, leaving little room for them to look beyond the campaign driven by the managers of these two brands.

It is as if these two leaders hold the key to all problems in the state and elsewhere.

The ruling Congress – being a three-time winner in the state assembly elections and in power since 2001 – is banking on its success in curbing a decades-old insurgency. Over the years, the government has been able to bring most of the leading insurgency groups to the peace-table and has signed a number of MoUs with a section of them.

The state also claims to be marching ahead in the health and education sector, having established a number of institutions at the national level, including the Indian Institute of Informational Technology, Rajiv Gandhi Institute of Petroleum Technology, National Institute of Design, three Medical Colleges, Homeopathy Colleges and Nursing Colleges. It has upgraded existing ITI institutions, improved existing health and education infrastructure and has been able to provide employment to over 60,000 school-teachers after successful conduction of the Teacher’s Eligibility Test (TET).

To the government’s credit, it has adopted a number of innovative schemes to improve secondary education. These include providing laptops and desktops to promising students and bicycles to girl-students from BPL families in the ninth standard to reduce drop-out rates among them.

In the agricultural sector, the state has already achieved rice-surplus status and is exporting a huge amount of indigenous rice annually to USA. The party also says that it has been able to improve road connectivity and replace wooden bridges in dilapidated condition in rural areas with concrete bridges.

However, the apparent graph of growth and its gradual success in improving the law and order situation hide other realities that could provide opposition political parties sufficient ground to mobilize public opinion. 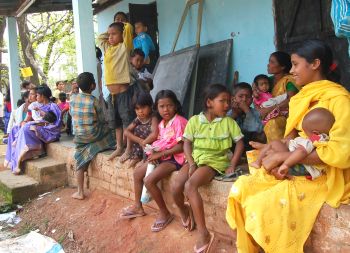 Children at a health fair in Assam. India Together Files

There is rampant corruption at all levels. Despite growth, the gap between the rich and poor has increased and there is also an area-wise imbalance of development activities. 37.9 per cent of families in the state live below poverty line (BPL), with a literacy rate of 73.18 percent (2011 Census). In char areas (small isles or islands of river Brahmaputra where over 2.5 million people live), the same is 68 per cent and only 19 per cent (2004-05 Socio-Economic Survey in Char areas) respectively.

In agriculture, while the state has become self-sufficient in rice production, according to the Socio-Economic Survey of Assam 2012-13, the growth of the agricultural sector, came down from 7.0 during 2010-11 to 2.4 during 2011-12 owing to factors such as erratic rainfall, insufficient irrigation support, and damage caused by natural calamities. These statistics clearly suggest that agriculture largely depends on ‘weather’ and mechanization of agriculture is still a far cry. Incidentally, agriculture supports over 75 per cent of the population and provides employment to 53 per cent of the workforce,

Similarly, implementation of most of the flagship government programmes has consistently left a lot to be desired. Continuing previous trends, only 11.08 lakh households were provided a job during the year 2013-14 out of over 39 lakh job-card holders under the Mahatma Gandhi Rural Employment Generation Act, 2005; a huge 5.6 lakh households availed less than 15 days of work. Assam is yet to set up an independent social audit directorate to drive regular social audits for timely and effective grievance redressal under the Act.

According to the Houselisting and Housing Census data 2011, over 72 per cent of households in the state still use firewood as fuel for cooking; only 19 per cent have LPG/PNG connections. Only 37 per cent have electricity as the main source of lighting while a meagre 10.5 per cent have tap water. The national averages corresponding to each of the above figures are 49, 28.5, 67.2 and 43 per cent respectively.

Under the Indira Awas Yojana scheme, only 46,697 out of the 71, 563 houses registered for new construction during 2013-14 year have been sanctioned, so far. Over 12 lakh people in Assam have had to face forced displacement due to various ethnic and communal clashes.

Displaced Children at a relief camp in Kokrajhar district. India Together Files

Over one lakh erosion-affected people live on different embankments in the state, most of them half-fed and without any sustainable livelihood. The state government is yet to chalk out a comprehensive rehabilitation plan or livelihood scheme to address the issues of people displaced by these phenomena.

The state also recorded the highest rate of crime against women with 89.5 per cent during 2012, as against the national average of 41.7 per cent.

Beyond doubt, these genuine issues of the common man would have provided sufficient grounds for opposition parties to carry on a pointed campaign and enabled them to mobilize public opinion. However such realities have totally been overshadowed by the loud personification of leaders of the two major political parties.

As Akhil Ranjan Dutta, political analyst and Associate Professor of Department of Political Science, Gauhati University says, “The 2014 elections General Election campaign exposes the political and ideological bankruptcy of the political parties and dominant media. While the dominant media reduces the whole election process to a contest for the prime-ministerial office between two personalities, that is, Narendra Modi and Rahul Gandhi, the political parties bypass all critical issues that affect the quality of life and sustainable sources of livelihood of common citizens of the country.”

Though the BJP has seen organisational expansion in various unconventional pockets of the state, it has failed to leverage the legitimate grievances of the common people. The party has 5 MLAs in the state assembly and won four Lok Sabha Constituencies during 2009.

The Asom Gana Parishad (AGP), the main regional party of the state, which was in power twice, has decided to field its own candidates after its efforts to forge an electoral tie-up with the BJP failed. The state BJP, headed by former AGP leader Sarbananda Sonowal, opposed a poll tie-up with the regional party although some in the BJP’s central leadership were opposed to bringing about a split in the non-Congress vote.

In 2009, the BJP had gained from a poll tie up with the AGP and had doubled its strength to four seats from the two it had won in 2004. The AGP tally, however, fell to just one seat from the two won in 2004. Assam has a total of 14 seats in the Lok Sabha. The final party positions in 2009 were:

Poll watchers say that the Congress has reached a tacit understanding with the AIUDF led by Maulana Badruddin Ajmal this time. The AIUDF, which is now the principal opposition party in the 126-member Assam Assembly with 18 legislators, caused heavy erosion in the Congress supporter base among Muslim voters in the 2006 assembly elections. It won ten assembly seats in its debut electoral performance.

Maulana Ajmal wrested the Dhubri Lok Sabha seat from Congress in the 2009 Lok Sabha polls and its candidates cut into the Congress vote base among the Muslims. This division coupled with the BJP-AGP poll tie-up helped the saffron party to capture at least two seats—Gauhati and Silchar.

The ruling Congress, hopes that division of votes between the AGP and the BJP, will give it an advantage in this election. However, with the country-wide anti-Congress mood reflecting in the state as well, it would do well to leave nothing to chance and focus more on ground-level issues.

URL for this article
http://indiatogether.org/modi-rahul-contest-and-assam-issues-government