MUNDRA
The cost of the coast
The people of Mundra coast face a constant struggle to protect their commons, rights and the very socio ecological character of the region from the massive land use changes around them. Kanchi Kohli reports.
30 August 2011 -

Nearly 5000 fisher folk, salt pan workers, pastoralists and farmers of the Mundra coast embarked on a padayatra in early August, to Save the sea, Save the land, Save the environment of their region. The march, which started from Bhadreshwar village on 3 August reached the district headquarters in Bhuj on the following day, where a 31-point memorandum was submitted to the District Collector.

The march travelled through the villages of Wadala, Mokha Chokri, Kundhrodi, Patri, Wanki, Tappar, Babia, Kera, Baldiya, and Bharapar, and at each point more people joined in to walk in unison to protect their lives cultures and livelihoods which has been severely impacted by indiscriminate industrial expansion in the area.

Mundra is a coastal taluka in Kutch, the largest district of Gujarat. The area is known for its rich biodiversity, with a fascinating interplay of inter-tidal mudflats, mangroves housing a rich diversity of seaweed, corals, fishes and an array of marine life. The Mundra belt has always been considered to be extremely ecologically fragile. The region supports the lives and livelihoods of fishing, pastoral and farming communities, and their salt panning activity. The Kutch region is also internationally known to be a bird watching paradise - it is a very critical habitat for a number of resident and migratory birds, with Mundra itself being no exception.

All this ecological sensitivity and unique cultural significance has been under threat for quite some time now - due to rising industrial investments, especially from private sources. One of the most significant investors and developers of the Mundra coast has been the Adani group, which has spread over the Mundra landscape with its port facilities and power plants for which ore is imported from Adani-owned mines in Indonesia. The Tatas too have established themselves, and have set up a massive thermal power plant.

Government reports on the Mundra coast have repeatedly highlighted the huge environmental impacts in the area due to the rapid industrial expansion. A report of H S Singh, Chief Conservator of Forests, Gujarat Forest Department published in early 2007 pointed to the drastic loss of mangrove forests, mainly from industrial activities, specifically in the Gulf of Kutch. The report also brought out that in certain areas along the Gujarat coast like Mundra and Hazira, the mangroves disappeared overnight. The Mundra Special Economic Zone (SEZ) area set by the Adani group included 3000 hectares of mangroves, and much of this has been cleared. 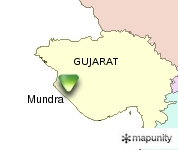 Government reports on the Mundra coast have repeatedly highlighted the huge environmental impacts in the area due to the rapid industrial expansion.

•  Women warriors of the sea
•  Exempt, but not exempt
•  The clock is ticking

For the people of Mundra coast, this massive and and fast paced transition is now an everyday story. Theirs is a constant struggle to protect their commons, rights and the very socio ecological character of Mundra and surrounding coastlines from the massive land use changes being facilitated through approvals from the centres of power. The affected people have tried petitioning, dialogue with government officials, legal action, street protests and also sought media support at various points of time.

After continuous lobbying efforts, the Ministry of Environment and Forests (MoEF) in December 2010 carried out a site inspection around the operations of two companies in Mundra. This was in response to a complaint filed by Machimar Adhikar Sangharsh Sangathan (MASS) highlighting specific violations of the Coastal Regulation Zone (CRZ) notification and other laws. These were the operations related to the Adani-owned Mundra Port and SEZ Ltd (MPSEZ) and the OPG group which has proposed a thermal power plant to be set up in Bhadreshwar. The site visit was led by Dr. A Senthil Vel, Additional Director, MoEF on 6-7 December 2010, and included officials of the Gujarat Pollution Control Board and Gujarat Ecological Commission.

The site inspection confirmed the violations, and that both the OPG group and the MPSEZ were issued show cause notices on 15 December 2010. MPSEZ was questioned amongst other things about large scale reclamation using dredged material, mangrove destruction, obstruction of creeks and the natural flow of seawater, construction of a township and an airport without permissions, and so on. These were also considered to be violations of conditions laid down by the MoEF and accepted by MPSEZ when the waterfront development activities of the company were granted environment clearance under the Environment Impact Assessment Notification on 12 January 2009. MPSEZ was asked to respond to this show cause notice within 15 days.

What is ironic is that the decision on this show cause notice is still pending eight months after the notice was issued, and MPSEZ's activities are continuing unabated. The reason for the delay was a response that was awaited from the Gujarat Coastal Zone Management Authority (GCZMA) which was in turn waiting for CRZ demarcation maps based on which it could be ascertained whether legal violation has taken place or not.

It does not seem to matter if the destruction of mangroves, creeks, mudflats, inter tidal areas and many other fragile areas are ravaged completely and irreversible land use change be allowed for, irrespective of whether it is done legally or not. Social and environmental impacts will not be less irreversible if an activity has a official license or not. 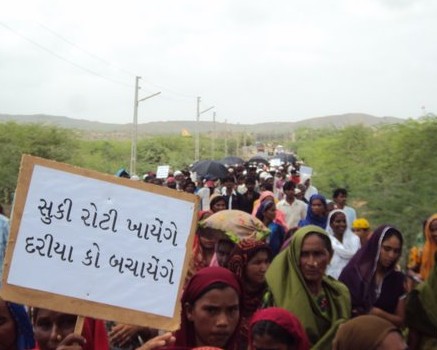 The padyatra was an attempt to draw attention to this larger question. Among other things, it highlighted the complete dependence of the fish workers of Mundra on their traditional trade. The power plants create massive intake and outtake channels that have severely curtailed their access to the sea. Additionally, the discharge from the plants into the sea is of much higher temperatures than the sea, leading to dramatic impacts on ecosystem on which plankton and other sea life are dependent.

In the past few years fisher folks on the coast of Kutch have already reported significant reductions of their fish yields. Tragdi village, which is well known for lobster fishing, saw negligible yield during the 2010-2011 fishing season, said a press release issued during the padyatra.

The memorandum submitted to the District Collector has highlighted the extent and range of impact in the region. One specific instance elaborated was that of setting up of the 300 MW thermal power plant by the OPG group which has signed a Memorandum of Understanding with the Gujarat government for a production capacity of 5000 MW. Pointing to the impacts from OPG's first phase of operations, the memorandum states that the plant will impact the lives of over 6000 fisher folk in Bhadreshwar. In addition, the livelihood of 5000 salt-pan workers and 7000 farmers and Maldharis, who depend on the gauchar (grazing) land of the village and on farming, is also threatened by the OPG power plant (see this earlier article).

The memorandum, with its 31 contentions, has requested the Collector to ask the government to safeguard the constitutional right of life, and the dignity of the people of the area. It has also sought clear accountability from the government with respect to its facilitation of extractive industrial takeover of the Mundra coastline.

While the people's determination is yet again inspiring, the real question is: what can we expect from the decision-making desks?

URL for this article
http://indiatogether.org/mundra-environment--2