MINING IN SENSITIVE REGIONS
Different reef, same barrier
As the Mundra project of the Adani group moves ahead relentlessly in Gujarat, a new front opens up in the company's troubles with environmental regulations, in faraway Australia. Kanchi Kohli reports.
12 September 2012 -

It was late morning on a hot summer day when we jumped on to a fishing boat at Tuna port. We had to wait for the high tide to bring in enough water so that we could find our way into the mangroves. The motor buzzed noisily and the sun was blazing, but on the plus side was a sight that held our attention even more strongly - numerous small sail boats traversing along in the background as flamingoes tip-toed on the mudflats before launching into mesmerising flight.

Sadly, it wasn't very long before reality hit us, in shades of black from the smoke stacks. As they loomed into view, I remembered what I had been told before we embarked on this ride. "Sister, go and see this place. This area too has been given away to the Adanis, and is going to choke the existence of the small and marginal fisherfolk there."

That day, we were near a traditional fishing harbour vital to the local community. This area adjoins Mundra block, the largest block in Kutch district of Gujarat. The region is known for its unique marine ecosystem dominated by mangroves and natural creek formations. There are stretches of live corals as well, which are home to several endemic and migratory birds.

While the areas near the sea and inter-tidal stretches support unique fishing livelihoods, the inland areas support grazing, horticulture and salt production. Mundra is known to have the most thriving occupations of these in the state. Being close to the sea facilitated trade, and the availability of sweet water also ensured that there could be agriculture in this otherwise desert landscape. Pastoral communities have also historically found enough commons and village lands for their cattle and other livestock.

A month back I had news that the inter-tidal area of our boat expedition already has a mud road, and a large exents of mangroves are being destroyed. This is because the Adani Kandla Bulk Terminal Pvt. Ltd., a subsidiary of Adani Ports and Special Economic Zone Ltd. has signed a concession agreement with the Kandla Port Trust to set up a dry bulk terminal at the Kandla port on build, operate, transfer basis. (see: this link). 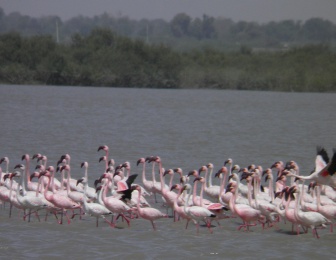 Every few weeks there is a protest or confrontation with the company reported. But construction and other activities go on.

•  The cost of the coast
•  Women warriors of the sea

Since the mid 1990s, Mundra is being transformed by massive investments in the region; among the most significant investors and developers in this region is the Adani group. Their influence can be traced back to 1994-95, when the Gujarat Maritime Board approved the establishment of a captive jetty at the Port of Mundra. Since then the operations of the company have grown in the region, with port and coal handling facilities, rail-links and many other industrial processes linked to a massive 'waterfront development project'.

Already, the effects of the massive changes in land use have been immense. Many fishing communities have lost direct access to their traditional fishing harbours, and where alternate longer routes are available there is a definite drop in the fish catch. Adverse impacts are also now beginning to show on the fertile farm lands, especially on coconut and dates, crops that this region is well known for. With large tracts of mangroves cut down, and the creeks blocked, the mud flats have today transformed into dry patches of land - almost like they are being readied for future industrial take over.

Every few weeks there is a protest or confrontation with the company reported. In June 2012, there was a direct confrontation between the Adani group and people of Shekhadiya village, when they disallowed the construction of a boundary wall as it would have restricted their access to grazing land. (see: this link). There have now been several occasssions when people of the area representing fishing, farming, salt panning and grazing livelihoods, and their supporters have have taken to the streets and courts in mass protest (see earlier article in India Together).

What is critical is that the destruction of both habitat and livelihoods continues despite notices by various government authorities. In December 2010 India's environment ministry issued a show cause to the company for legal violations and non-compliance of regulatory requirements to what was then called Mundra Port and SEZ Ltd. More recently in May 2012, the High Court of Gujarat ordered Adani group to stop all its construction work at their Adani Port SEZ Ltd (APSEZ) around Luni village following a Public Interest Litigation alleging violation of the terms of land allotment. The Ministry of Commerce has also questioned the company on grounds of concealment and distortion of facts while seeking approval for a Special Economic Zone.

These protests and regulatory warnings do not appear to have dented the company's determination to carry out the construction and operational tasks of the project. In Australia too, the scenario is the same - the Adani group claims to be moving ahead steadfastly, with eyes set on coal mining there.

Locals have watched these developments with anxiety, worried that their familiar ways of live would be transformed completely by the new forces at play. Their suspicions are being confirmed with each passing month of the projects. It is not surprising then that conflict between people living in the area and the company are only on the rise alongside the growing discontent. And now comes news, from faraway Australia, that they are not alone in fearing the worst.

In that country, newspapers have been abuzz with news related to the impact of the Adani group's Carmichael mine, with numerous reports that the mine could negatively impact the Great Barrier Reef, a World Heritage Site and among the most famous large ecosystems in the world. Organisations like UNESCO have now come forward to object to this proposed mine which to connect to Adani's new coal export terminal at Abbot Point port to the port at Hay Point by a rail link. The mine, expected to cost US $4 billions to establish, could be operational next year, and produce 23 million metric tonnes a year initially.

Will the record of events in one region affects the way business is done in another? It is doubtful, but it is noteworthy that two completely unrelated geographies of the world have now come to be connected by a common factor.

URL for this article
http://indiatogether.org/mundra-environment