CASTE/EDUCATION
Caste conflict hurting schooling for dalits
In a number of dalit settlements in Gaya, Bihar, there are school structures but no teachers. In some places, where there are both, as in Parariya village, the dominant Yadavs make intrusive and insulting remarks that do not provide a facilitating environment. Rahul Ramagundam reports.
06 December 2006 -

Samphul Devi (name changed) is an agitated woman. "The Yadavs", she gestures, "tell us that we are to plough fields and not send our children to schools. One who eats dirty pigs is not entitled to study in schools, they say." Samphul Devi is a dalit-Bhuiyan and lives in Bihar's Gaya district. Loitering with pigs, catching fish in muddied, stagnant pool of water is the main day time engagement of children of her rural community. It is a state of affairs that Yadavs, a middle caste, relatively prosperous land holding community, wants to be continued. Samphul Devi, herself an illiterate, wants it to be changed; hence the contestation and the agitation.

Those Yadavs hindering the cause of the Harijan school are concerned with the resource crunch they might face if the Musahars too get some semblance of education and therefore refuse to work in their fields on un-favourable terms.

The dalits of Gaya, including Musahars, constitute thirty percent of the total district population. They are the poorest and also the most reviled community. All over Gaya, left intellectuals and landlords, politicians and worn-out NGO activists, media-personnel and the common urban man assert that Musahars are poor because they lack a vision of the future. They say that the Musahars are content to live in the present and do not trouble themselves with the thought of tomorrow.

Take Eighty-four year old Dwarko Sundrani, the doyen of voluntary institutions in Bodh Gaya and one whose activist life span is spread over half a century, asks 'Ek musahar kitni door dekh sakta hai?' How far can a Musahar see? He himself answers the query. 'Jitni uski thali hai!' Only till the inner circumference of his dining plate! A Musahar, Sundrani is saying, is culturally encumbered to see no more than his immediate food, by implication his own immediate need. 'Musahars', the venerable Sundrani, says, 'are a people with no morality, no culture, no truth, and they are extremely meek'. The women are loose and can offer sexual favours at the price of one meal. The men are thieves and liars. Cheddi Prasad, a former activist of the defunct Chatra Yuva Sangarsh Vahini and now running an NGO, says, 'it has remained a mystery to me why a Musahar cannot develop an attachment to his own things.'

When prejudices are distilled into comprehensible terms, they are more a stereotype construction of a poor community who are not allowed to speak for itself or heard of. According to this stereotype, hardness of their hearts and laziness of their ways, their slothful bodies and sluggish mind, cunning practices and drunkard habits, wasteful revelries and shirking work ethics, explain the wretchedness of Musahars. They share no emotional relationships; they have no accumulative traits or thinking faculty and shamelessly line up for free-bees.

These are not just prejudices against a particular community; they are an engrained social construction of a marginalised community that declaims a possible participation of the dalits into resource-use rivalries or access to empowering opportunities that the state provides.

School is one such community resource provided by the benevolent state, however insufficient in number and inadequate in quality it might be. In a number of lower caste settlements in Gaya, inhabited by people earlier bonded under the Kamauti system and later the beneficiaries of the Bhudan movement, there are school structures but no teachers. Where there are both, as in the Parariya village of the Mohanpur block, which has a Harijan primary school located amidst the tola (hamlet) of the Musahars, the dominant caste, the Yadavs, of the village make intrusive and insulting remarks that do not provide a facilitating environment. 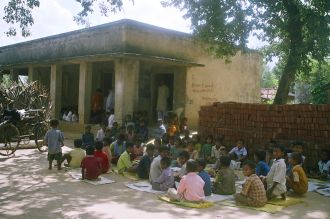 At the Parariya village, where Samphul Devi and her Harijan tola women is engaged in a duel with Yadav men of the same village, contestation is about the resource-use rights and exclusionary principles. Can exclusion be perpetual?, is the question that dalit women are asking. The Village Sikcha Committee, an education committee mostly comprising of parents of pupils, is an initiative that attempts to make schooling accountable to society. The committee does not have Yadavs in it, and yet they wield enough influence to derail the midday meal scheme. They have thwarted a new construction of the school building of a designated Harijan School which is located in Harijan tola. The Harijan school is a government affirmative action initiative primarily meant for scheduled caste population in an area predominantly populated by scheduled caste. (Harijan is name mostly in use in government parlance for scheduled castes, a Gandhian legacy.) The Yadavs filled up the trenches each time it was dug up for erecting the walls of the new school building. They contend that the Harijan School should be built in their tola.

Most Musahar women say that the Yadavs talk with their lathi and continuously threaten and abuse them. The Musahar women have tried to go to the district magistrate Jitendra Srivastava to make a representation, but they have failed repeatedly due to the official's absence. Other officials do not listen. The Harijan school teacher, Padmakar Pathak, a Brahmin man, is harassed by Yadavs for taking sides of Musahars. The Musahar women and the Brahmin teacher have bonded well to face the subversive intransigence of the Yadav neighbours. The Yadavs are pooling resources and mobilizing their social network to get the belligerent teacher transferred. They have even threatened the teacher with dire consequences, if he plays a more pro-active role on behalf of the Musahars.

Violence can be more pronounced if Musahar men get involved. The Musahar men therefore are silent spectators to unfolding war of attrition between their women and Yadav community. In any case, most Musahar men are non-resident villagers. They are mostly are migrant labourers who go from Gaya town to Delhi city and other cities in search of livelihood. In the absence of the men, the forward line in this contestation for hegemony is occupied by the Musahar women. The Musahar women also have more stake as they not only live in the village but also work in Yadav fields. Somehow, they also understand the meaning of education better than their man folk.

The Yadavs are the middle caste that has received the most of the political empowerment in recent times, and are engaged in a battle of supremacy with the dalits. Their new fangled status, however, does not collide much with the upper castes who wielded such power before. But a combination of factors such as the false consciousness of being the ruling elite and having the feeling that their acts will be condoned by an increasingly subverted administration makes their dominance almost overbearing.

The conflict is likely because of resource-use rivalry than about castes. Those Yadavs who are hindering the cause of the Harijan school are in fact concerned with the resource crunch they might face if the Musahars too get some semblance of education and therefore refuse to work in their fields on un-favourable terms. The high rate of migration from Gaya's villages has already made small landowners prone to hardships. Their small landholdings and resources do not permit the use of machinery on their farms.

The conflict is also about the control of the productive assets. A chunk of Bhudan land, roughly the size of a basketball court, is lying fallow in the village is under contestation. The Bindeswar Yadav family (name changed) wants to control that land for personal benefit. In every village some land that was gifted during the Bhudan movement for distribution among the poor, landless, in the 1950s, were retained as community land on which, later, school or other such public space could be built. Bindeswar Yadav has bought a piece of land adjoining the Bhudan land on which the school is to be constructed. They are eying the Bhudan land for personal aggrandisement.

If the school is constructed, the land will go to the community. It is this which is the main contention. The Yadav family is using all possible tactics including to boast of connections with dominant Yadav state politicians, and their ability to mobilize a subverted and acquiescing administration. In addition, dalits have been alleging for sometime that the Yadavs control the Maoist Coordination Centre, a militant organisation. Can an aggregate of dispossessed women, eking out an existence that draws sustenance from the resource base of the adversary, succeed in building a future for their children that is less malevolent?

URL for this article
http://indiatogether.org/musahars-education