Various independent studies and research reveal close to 20 per cent of students across India suffering from some degree of visual impairment. A new initiative from the Nayonika Eye Care Charitable Trust seeks to correct this through the combined efforts of a wider network.

About 320,000 children in India are blind (comprising 19 per cent of the world's blind children) and 50 per cent of these cases are treatable or preventable. Eye-testing is the first point of intervention, and simple conditions such as refractive error, the second leading cause of visual impairment and blindness in the country, can be taken care of by correcting vision through spectacles. It is important, however, to detect this at a young age, since uncorrected vision in a child could lead to visual impairment at a later stage and develop into what medical practitioners term as 'lazy eye.'

A study conducted by the Advanced Eye Hospital and Institute in Mumbai shows one in every five students in India having some form of vision impairment and close to five per cent of students with vision nearing blindness. Another survey conducted by the Nayonika Eye Care Charitable Trust in Karnataka between 2010 and 2013 found that out of 5813 students screened across both government and private schools, 1108 or 19.01 per cent suffered from reduced vision. Needless to say, given the impact of visual impairment on the overall, lifelong development and productivity of an individual, the situation is grave enough to be addressed on priority.

Eye screening in schools is a very important part of India's official approach towards visual health and eye care - the National Program for Control of Blindness (NPCB) initiated by the Ministry of Health and Family Welfare in the year 1976. A 2009 publication from the Directorate General of Health Services on the School Eye Screening (SES) component of the NPCB describes its scope to include "identification of schools, collection of information on number of students and teachers, screening and referral centres, training of school teachers, training of general health care personnel, confirmation of 'suspect' students by ophthalmic assistant or ophthalmologist, prescription of glasses, and provision of free glasses to students from poor socio-economic strata."

An operational research study was conducted in 2008- 09 by Sadguru Netra Chikitsalaya under the aegis of the national body VISION 2020: The Right to Sight . India to study if there are delays in provision of the spectacles after examination, whether every child prescribed was using the spectacles (and if not, the reasons), whether prescriptions were being given for less than significant refractive errors, and whether the type of frame and the fitting job were done properly. The team conducted the study across schools reaching over 52,000 students in order to gather a sample respondent size of 982, comprising those who had at some point of time or the other been prescribed spectacles.

One of the main findings of this study was that utilisation of spectacles after provision was only 30 per cent. The study concluded that there were several reasons for non-compliance, such as prescriptions for non-significant refractive errors and provision of adult frames for the children. Other problems range from physiological - problems such as discomfort, headaches and watering of eyes, to sociological - being teased by friends and relatives or even discouraged by parents.

In the presence of various such factors, it was found that only 21.9 per cent of students who were given glasses went back for the mandated repeat check-up after a year to monitor the effects of glasses or changes in the power of spectacles.

There are also several cases where respondents complained of problems with the frames they had been given - either of size, fit or merely personal preference. While these factors might sound trivial, they are real and contribute significantly to the usage of glasses and hence the final outcome of any screening programme. Less than 28 per cent of those surveyed were using their spectacles for the whole day and 35 per cent were using it for less than four hours during the day. There was thus a need for a relook at the activity to make sure that the spectacles were used regularly after being provided.

Neither have all children refracted under the SES programme received spectacles. Official statistics on the NPCB website shows that in 2011-12 alone, while 985,475 schoolchildren were detected with refractive errors, only 658,061 among them were provided with free glasses under the programme.

Given the various areas that need focused attention, any successful effort to tackle all the issues mentioned above has to be a joint initiative of the social sector and the government. And it is that which a new initiative by the Nayonika Eye Care Charitable Trust in Karnataka, called Nayonika Makala Netra, hopes to achieve. The initiative envisions more inclusive screening of schoolchildren, a boost in spectacle usage after prescription as well as continued monitoring and evaluation of those refracted.

The project is conceptualised on the basis of a cluster model. Each district covered by the project will be divided into a number of zones and each zone in turn will have several clusters with assigned eye doctors and optometrists. Under each cluster, around 20 to 25 schools will be screened.

The teachers in these schools will be trained on how to observe the children for behavioural or physical symptoms that indicate vision impairment, or concrete complaints such as headaches, blurred vision etc. Ophthalmic officers from Nayonika Eye Care Charitable Trust will re-screen the identified students and provide spectacles if refractive errors are found; in cases of complication or other vision-related problems, the children will be referred to relevant medical experts. Spectacles or other treatment, as the case may warrant, shall be provided for in collaboration with the Nayonika trust or its associated partners.

To begin with, the school screening programme under Nayonika Makala Netra will be done through collaboration with NGOs working with the public education system. For children outside the formal schooling system, a similar approach would be followed, involving Anganwadi teachers and Accredited Social Health Activists or ASHA workers. 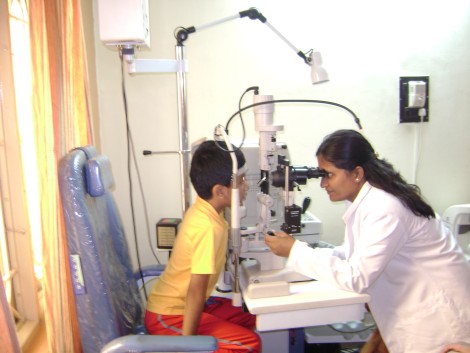 As Prasanth S B, who co-founded the Nayonika Eye Care Charitable Trust along with eye surgeon Dr. Surekha P, points out, "One possible reason for the discrepancy between the survey findings referred to above and the national average is, of course, the fact that the SES programme excludes the large number of children who do not go to school. Bringing Anganwadi and ASHA workers within the network would ensure greater reach among rural populations where a significant section of the child population may be out of the formal schooling system."

While the primary level of screening (or pre-screening) will be done by school teachers/Anganwadi teachers by observing the students for one month followed by treatment as necessary, the cluster team will revisit the school every three to four months to monitor the situation for a minimum of 2 years.

The problem of continuing evaluation and follow up would also be addressed by the involvement of the non-medical NGOs and social workers such as ASHAs. These NGOs or social officers already have a rolling, continuing partnership or involvement with the schools. Their inclusion helps to reach out to a larger number of schools and get more buy-in from teachers and other stakeholders over a period of time.

As Ashok Kamath, Chairman of Akshara Foundation, which works closely with public education authorities in Karnataka says "our Foundation, through multiple programmes has touched the lives of hundreds of thousands of children in Karnataka. We have always believed in collaboration with people and organisations of differing competencies so that we can synergise to create the maximum possible impact. On hearing about the Nayonika project, we felt that we could already leverage our presence in schools and share our database with them in order to enable them to better achieve the impact that they seek to create through their programme."

Nayonika Makala Netra, in collaborative efforts with Akshara and other NGOs, aims to serve over one million children by 2020 in the districts of Hoskote, Malur, Bangalore Urban and Rural, Koppal, Dharwar, Gadag and Madikeri covering over 10,000 schools and providing necessary treatment to those who need it.

As mentioned earlier, a cause of great concern is that utilization of spectacles distributed by the District Blindness Control Societies (DBCS) under the NPCB is only 30 per cent. The Nayonika project aims to add more modes and channels of spectacle supply to supplement the existing government-run DBCS programme, and pay more attention to issues that deter greater compliance in spectacle wearing.

The involvement of the social sector could also help to evolve a continuous thrust on education and awareness generation. "This, coupled with ongoing periodic evaluation, could go a long way in ensuring that every child with affected vision covered by the project not only receives the correct treatment but is actually following the prescribed course of action," adds Prashant.

Over a period of time, with the involvement of more established and successful NGOs (Monitoring), the DBCS (for necessary permissions and spectacles) and INGOs (for monitoring and other treatment support), the project could be scaled to reach more parts of the country. Perhaps the greatest benefit of such a project lies in the the synergies resulting from the cooperation of the various sectors - medical, social and governmental - brought together on the same platform.

To quote Prashant, "Nayonika Makala Netra has been designed to ensure that all concerned stakeholders collaborate and combine their expertise to ensure better vision for all children, and eventually all citizens. We have already seen the involvement of the not-for-profit social sector yielding positive results, and we hope to scale it to a much higher level in the days to come."

URL for this article
http://indiatogether.org/nayonika-health