GREEN TRIBUNAL
NGT: The first seven months
The first set of hearings winds its way through the newly established environment tribunal, against the backdrop of a government push to speed up industrialisation in forest areas. Kanchi Kohli reports.
02 February 2012 -

On 4 July 2011, the much awaited and equally contested National Green Tribunal (NGT) initiated its first set of hearings in New Delhi. he NGT had replaced an erstwhile institution the National Environment Appellate Authority (NEAA) which had been set up back in 1997 and where environmental approvals granted to industrial and infrastructure projects could be challenged by affected people and concerned citizens.

The legislation constituting the NGT was gazetted in June 2010, and the NEAA ceased to exist in October that year. But it was only in April 2011 that the Rules to enable the implementation of the new Act were put in place. Even then the NGT was not up and running. It was only after an order of the Supreme Court in May 2011 - where the Ministry of Environment and Forests (MoEF) gave clarifications on several pending issues including on the status of the NGT, its various benches, appointments, and allowances of the judicial and expert members - that things got moving at last.

The MoEF revealed then that the NGT would start up with only one bench that would be made functional in New Delhi. It is here that all the cases would be heard till the time the regional benches were set up. The 26 cases that had not been heard since October 2010, were now transferred for early disposal before the NGT.

It is no surprise, then, that some of first significant observations and orders of the NGT are related to cases that have been pending for a long time. In some cases the projects challenged before the NGT have substantially gone ahead with construction activities, and in other cases too this would have happened but for other social, political or economic factors. The NGT also began hearing some fresh appeal and applications that had been filed before it directly and where issues had cropped up during the period of pendency.

Its been seven months now since the NGT has been in place, hearing matters regularly week after week. The first regional bench in Bhopal has also been inaugurated in November 2011. Here are some interesting snippets from the NGT's seven month journey so far. Each one of these is not only a legal story but is linked to lives and livelihoods of thousands of people on the sites from where the challenges have emerged. And in these first orders of the NGT lies significantly the future of the ecologically fragile habitats where industrial and infrastructure development has been planned.

One of the 26 cases that were transferred from the NEAA to the NGT was a challenge to the 1200 MW thermal power plant located in Jaigad, in Ratnagiri District of Maharashtra, planned by JSW Energy (Ratnagiri) Ltd (JSWREL) which had received its environment clearance in May 2007. This project was challenged before the NEAA, which had dismissed the applicants' contention that the adequate studies had not been completed before the project was granted approval. But the decision of the NEAA was further challenged before the Delhi High Court which took a firm stance and sent the project back to the desks of the Expert Appraisal Committee (EAC) of the MoEF which had first cleared the project (See: http://indiatogether.org/2008/sep/env-neaatpp.htm; http://indiatogether.org/2009/oct/env-jswrel.htm).

The EAC took a lenient view and kept to its earlier decision. The sub-committee of the EAC which visited the project site found no reason to worry about the impacts of a thermal power plant on the mangoes, as many mango orchards were thriving despite vehicular pollution, they said. The project was granted approval the second time on 28 June 2010, and once again challenged before the NEAA almost immediately. One main contention was that the impact study ordered by the Delhi High Court had not been completed and made public as required under the Environment Impact Assessment (EIA) notification, 2006.

The NGT in its 13-page final judgment delivered in late November 2011, allowed the project to go ahead. The tribunal accepted that the EAC as well as MoEF had taken all precautionary measures in this particular case by laying down stringent conditions, including the addition of a Flue Gas De-sulphurisation (FGD) system, dense plantations and so on. The NGT order also quoted the condition imposed at the time of grant of environment clearance that if at any point there were evident impacts on the mangoes, the plant shall be shut down. 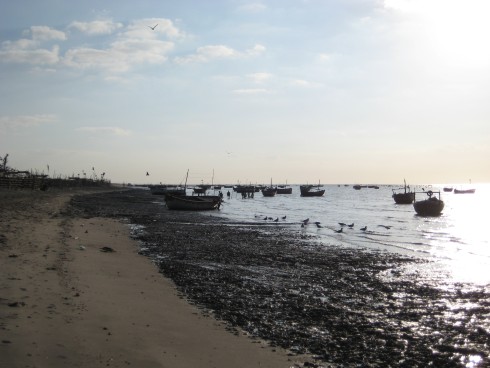 The arguments in the NGT are deeply inter-linked with the growth impetus that the Government of India is committed to. (Pic: The Bhadreswar coast is among the many ecologically sensitive regions at risk).

•  Third time around the law
•  Lights, camera, destruction!
•  The clock is ticking

The NGT bench of Prof. R Nagendran and Justice C V Ramulu saw "no merit in this appeal" and felt that it was "liable to be dismissed". The project is now underway with its first phase commissioned and the impacts on the alphonso mangoes still being under ongoing study.

On 28 July 2011, the NGT bench of Devendra Kumar Agrawal and Justice C V Ramulu passed a very interesting interim order in the case challenging the environment clearance given to the Renuka Dam Project. The governments of Delhi and Himachal Pradesh had signed an agreement back in 1994 for the construction of this dam, which is to meet the ever-increasing demand for water for the National Capital Region (NCR). The project proposes to build a 148-meter-high dam to impound the Giri River (a tributary of the Yamuna) at Dadahu, in Renuka tehsil of Sirmour district in Himachal Pradesh.

In its interim order the NGT, while continuing to hear the case on merit, asked the project authority - Himachal Pradesh Power Corporation Limited (HPPCL) - to stop any construction activity related to the project, and during the hearing also said that no compensation related awards should be made for the land that was acquired for the project under the Land Acquisition Act, 1894.

There were two significant reasons for this. One, there were many discrepancies in the figures related to the total area to be acquired for the project and the total number of families to be affected. The Environment Impact Assessment (EIA) report, the MoEF's letter granting environment clearance and the affidavit filed by HPPCL in the court presented three different sets of data related to the above facts.

The second reason was that on 31 August 2010, the MoEF had rejected the proposal to granted approval for diversion of 775 hectares of forest land for the Renuka project. This fact was also presented before the NGT bench, even as the project authority continued to argue that their approval is under consideration and not pending.

The Renuka case has since taken some interesting twists in the NGT; several applications have been filed before the tribunal seeking vacation of the interim order. Some of the petitioners are people whose land has already been acquired for the project, who are aggrieved that the NGT has stayed the payments for the lands acquired from them. More details have been sought on this issue by the NGT bench; the next hearing will be held later this month.

Some of the most controversial projects of recent years are also pending before the NGT, at this time. In the case of the challenge to the environment clearance given to the 4 MTPA steel plant and captive port of the South Korean Pohang Steel Company (POSCO) in Jagatsinghpur of Odisha, which faces strong opposition from locals. Even as the various approvals for this project have been pushed through following interventions of the Prime Minister's Office (PMO), villagers in the Dhinkia panchayat have stiffly resisted the take-over of their lands by the company. In the ministry's own committee, three out of the four members had asked for the project to be rejected (see this link and this one).

Three cases have been filed against the construction of the 300 MW Thermal Power project at inter-tidal area of Bhadreshwar coast in Kutch District of Gujarat. While the first appeal was filed before the erstwhile NEAA and transferred to the NGT, a fresh case has been filed against the grant of the Coastal Regulation Zone (CRZ) clearance for laying the water pipeline for the project. In the meanwhile without waiting for the approval under the Forest Conservation Act, 1980 for diversion of forest land for the construction of the project, OPG Power Gujarat Pvt. Ltd. has already initiated construction of the project.

The affected fish-workers, salt pan owners and graziers, who have been against the project from the very time it first came to their notice don't want any stone unturned to protect the last remaining inter-tidal area very important for all their survival. Much of the adjoining areas around Bhadreshwar have already been acquired for industrial purposes (see this link).

There are others on the list, with varying levels of local resistance, and evident risks of significant social and environmental impacts. These include the 1750 MW Demwe Lower project on the Lohit river in Arunachal Pradesh. The riverine islands and tracts in the Lohit river downstream are important for wildlife and feature Important Bird Areas; potential Ramsar sites; National Parks (e.g. Dibru-Saikhowa National in Assam); habitat of species such river dolphin, tiger, wild buffalo and elephants. An important cultural heritage site, called Tailung by the local Mishmis and more popularly known across the country as Parasuram kund, is located immediately downstream of the project in the Lohit river. The downstream areas are also important for livelihoods of local people (also constituting forest rights) such as fishing, agriculture, grazing and driftwood collection.

The arguments in the NGT are deeply inter-linked with the growth impetus that the Government of India is committed to. With that as a given, there are many stories of regulatory compromises, on-site protests and environment assessments which have presented series of falsities or half truths will unfold as projects will be sought to be approved irrespective of their impacts or illegalities. Many of them will also land up in the court rooms, where decisions will either strengthen or weaken the socio-political and environmental struggles.

URL for this article
http://indiatogether.org/ngt-environment--2