WEAVERS
Reviving the cotton-to-cloth chain
The introduction of centralised spinning mills in British times reduced the economic benefit that farmers and weavers could obtain. But now it is being asked, can decentralised cloth-making revive old livelihoods? Surekha Sule reports.
02 June 2006 -

Although weavers in villages are surrounded by raw cotton, they almost always have to get their cotton yarn from spinning mills located miles away. Farmers too face a similar problem; there are hand-operated looms all around them, but they end up selling their raw cotton to ginning mills who then sell pressed bales of cotton to distant spinning mills. The cotton thus travels from the village all the way to spinning mills for conversion into yarn, and then travels back to weavers in villages. If the raw cotton produced in a village could be converted into yarn locally, both farmers and weavers might benefit greatly. But expert spinners have long believed that the economies of scale obtained at big spinning mills that produce yarn on a massive scale, cannot be matched at the village level.

Until L Kannan took up the challenge. Kannan, a graduate of IIT Madras, has been working since the early 1990s to design a decentralised spinning unit. His first micro-spinning unit has been operating for the last three years in Chirala, in Prakasham district of Andhra Pradesh. Now this Chirala model is to be replicated at eight cotton growing locations in Andhra, Maharashtra, Tamilnadu and Karnataka. The Decentralised Cotton Yarn (DCY) project is funded by Ministry of Rural Development through the National Institute of Rural Development, and is implemented by Dastkar Andhra (DA), an NGO which has created an organised market for small weavers spread across the state. DA is also a research and consultancy organisation for the handloom industry in AP; it has regular outlets, and also holds exhibitions and sales in different parts of the country, thus helping small weavers tap distant markets.

The idea is very attractive - cotton farmers get good prices within the village and weavers also get yarn within the village or in the vicinity, and thus both are relatively more immune to external market forces. Says Uzramma of Dastakar Andhra, the director of the DCY project, "Our long-term goals for this initiative are to provide raw material to the handloom industry through a yarn production process that distributes the stages of production into a series of small-capital, low-energy activities consistent with household textile production, and to bridge the gap between farmers and weavers. The DCY activity combines technical development with an effort to embed this in the social and economic context."

Traditionally, spinning and weaving was a cottage industry, and the entire chain of production from cotton to cloth was localised. It was during the British Rule that centralised cotton spinning began, and with it the necessity to press cotton into bales for easy transport. The pressed bales need to be mechanically re-opened at the mills (through blowing, typically); cotton is then spun into yarn and introduced into the organised market where small weavers have no control. By and large, the system of large scale cotton yarn production has been detrimental to the interests of small cotton farmers and traditional handloom weavers.

Traditionally, spinning and weaving was a cottage industry, and the entire chain of production from cotton to cloth was localised. It was during the British Rule that centralised cotton spinning began, and with it the necessity to press cotton into bales for easy transport.

Says Uzramma, "the mainstream technology in use in contemporary spinning mills is a centralised, capital intensive technology ill-suited to the operating conditions in India where cotton is grown by millions of farmers on small farms, and yarn in turn is woven mostly (over 90%) by dispersed handlooms and powerlooms. Due to high capacities and production rates of the machinery employed in spinning, only large quantities are economical to spin, while a weaver needs small quantities of different types of yarn. The overheads of transporting yarn add to the costs. Meanwhile farmers are constrained to produce the cotton demanded by mills, rather than grow rainfed varieties."

Restoring economic clout to farmers and weavers, however, is no simple task; mechanised spinning on a large scale cuts costs greatly, and dispensing with this completely might make local efforts uncompetitive. But can some mechanisation be retained, while increasing local control? Kannan began by asking if we can we go back, at least to some extent, to the old tradition of localised chains of textile production, and still retain the benefits of modern spinning technology? He reasoned that if small quantities of cotton can be spun directly into yarn locally, then a number of costs - for compressing the cotton into bales, transportation to mills, decompression of the bales at the mills - can all be avoided. He established Vortex Engineering in 2002, and with funding from the Ministry of Rural Development, decentralized cotton yarn (DCY) units capable of working with small quantities of cotton were developed

The chain begins with the usual ginning process, where seeds and fibres are separated. After this, bypassing the baling process, a new carding process where dirt/trash are removed is taken up, and the first crucial links connecting fibres to one another in a continuous lap takes place. The carded sliver then goes through a drawing process where fibres are aligned, the slivers equalised, and given a slight twist. These drawn slivers are then put through roving process that draws down the sliver further, adds twist and winds it on spindles. It then is drawn into yarn with more twist during spinning on charkhas or ring-frames. This spinning could be done on ring frames with large number of spindles, but the smaller ring-frames are of a size that can be operated at home, and thus retains livelihood options for rural women, an essential element of DCY model. The spun yarn is reeled into hanks, which are preferred by handloom weavers. After strengthening and dying, hank yarn goes into winding for weft and sizing for weaving into cloth through warping.

The all-important question is this: will the final product - i.e. undyed, dyed or printed cloth - withstand market competition? While baling, transport and unbaling costs are eliminated, this advantage is offset by higher cost of manual spinning on charkha compared to machine spinning. Hence, overall DCY process may turn out to be not cheaper than the large spinning mill process. But the rewards are distributed more evenly, with farmers and weavers themselves likely to keep a much higher share of the economic value of goods sold from the cotton. In the long run, costs may also come down further; currently the cost of each DCY machine is Rs.29 lakh, but once it becomes popular and others begin to copy it, this price tag should substantially come down, says Uzramma confidently.

DCY unit production is geared to cotton yarn up to 40 count rather than finer count of 100 or so, since it targets the large-scale middle market. Besides this limitation is an advantage as farmers do not come under pressure to produce long staple cotton variety to suit big spinning mills' demand for finer yarn. In fact Dastkar has deliberately kept it down to the 40s, and is not trying to make fine yarn, since DCY model is not meant for high-end elite market. The DCY fabric competes well with Khadi in terms of quality and prices. If the spinning is undertaken by powered charkhas, then it cannot be strictly called Khadi. However, the fabric is similar to Khadi in look, feel and other attributes. All of Chirala's DCY fabric is lapped up in the market, says Uzramma.

And judging by the enthusiasm of the weavers themselves, the prospects appear bright. Dastakar Andhra organised a demonstration at Chirala for weavers, farmers, spinners, NGOs, and government officials on March 6, on the occasion of the inauguration of Chirala DCY's new premises. Prospective NGOs bidding for eight similar units that DA will be setting up also participated. Some of these are Magan Sangrahalaya (Wardha) and Amrut Biotech from Maharashtra, Sewa from Karnataka, HLWDS from Kerala, and MARI (Warangal), DHAN Foundation (Nalgonda), SECURE (Khammam), CCKS (Adilabad), Pasalapudi Weavers'Co-operative (East Godavari), Guntur Zilla Khadi Samiti all from Andhra Pradesh. 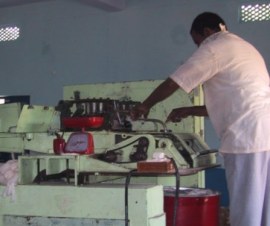 A draw frame for aligning fibres.

The DCY team demonstrated the entire process to over a hundred participants. There are 16 domestic spinning machines for which adequate cotton sliver is available within the village. These spinning machines are 8-spindle 'new model charkhas' which have been motorised with 0.25 hp motors. Weaving is integrated with the yarn production and currently about 700 metres of cloth is being woven every month; this is sold through the Dastkar Andhra Marketing Association. "The marketing arrangement is established well before the production process; this is the key to the success of DCY units" says Uzramma. Dastakar Andhra, being in this trade, has offered a ready market for the cloth produced by the weavers and is confident of marketing the output from all eight units.

While Dastakar Andhra, along with Kannan and others, has worked towards the development of the technology, all field processes and idea development have been undertaken with the close involvement of the Rashtriya Chenetha Karmika Samakhya (RCKS) the independent weaver movement from Chirala. As part of the process, rural youths who have passed Standard X have been trained, and are now proficient in the running and maintenance of the machinery. Some of the innovations in the performance of the machines too have come from these trained personnel.

Participants' responses after the Chirala DCY demonstration are quite telling. Magan Sangrahalaya from Wardha has to source cotton sliver for its khadi unit from Trichur and hence would like to take up pre-spinning work for DCY units. Amrut Biotech, representing a consortium of organic cotton growers, thinks that DCY machines would enable them to make cloth locally from their own organic cotton without the fear of getting it mixed with other cotton. In Kerala's Wayanad, Iddukki and Palakkad, yarn isn't easily available to weavers; so HLWDS from Kerala feels that having a DCY unit locally available can change this. RCKS noted that a shirt takes 2 kilograms of raw cotton to make, and is sold in the market for Rs.300-400, but the farmer hardly gets Rs 20. A DCY unit will benefit both weavers and farmers. One weaver, Narsimha Rao, noted that about 6000 of 15000 looms around Vetapalem are idle as the weavers cannot do the high-skill work required by the master weavers. A DCY unit will be suitable alternative for such weavers.

Surekha Sule is a freelance journalist and an environmentalist from Mumbai and currently a Senior Fellow at National Institute of Rural Development (NIRD), Hyderabad.

URL for this article
http://indiatogether.org/nobale-economy