RESOURCES / MINING
Anguish in Angul
The proposed natural resource extraction in Angul district and other nearby places in Orissa will devastate the land and its already-suffering people even further. Shripad Dharmadhikary reports.
26 April 2011 -

Gadharkhai, in Banharpal block in Angul district of Orissa is an unusual village. Even as battles rage all over the country with communities protesting displacement and refusing to move, the people of Gadharkhai are actually demanding that the Government displace them and resettle them elsewhere.

The explanation is not difficult to find. Gadharkhai has the misfortune to be located close to the aluminium smelter plant of NALCO, and is at the receiving end of pollution from the factory. In particular, the residents complain of being affect by fluoride pollution. The impacts make for a dreadful story. Adults with bent legs and brittle bones, children with deformed bone structures, cattle that find it difficult to survive, crops that get damaged, water that precipitates coloured residue when boiled and little action from the government or the factory even after countless rounds of petitioning and protests.

This has been the situation here for many years. In desperation, the villagers are now demanding that the government shift them out of the shadow of the aluminium plant and its terrible pollution.

Yet, in other ways, Gadharkhai is not unique. Many villages, and several towns and cities, share its polluted fate. These villages and towns are all located in what Government of India's Ministry of Environment and Forest (MoEF) calls "Critically Polluted Clusters/Industrial Areas." The MoEF has created a Comprehensive Environmental Pollution Index (CEPI), a composite index measuring various air, water and land pollutants in a region. When the CEPI exceeds 70, the area is described as Critically Polluted Industrial Cluster. Gadharkhai and many other villages fall in the Angul-Talcher critically polluted cluster in Orissa. 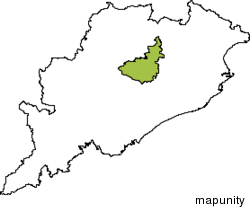 Even as the area grapples with the problems of pollution, depletion of water resources and displacement, the Government of Orissa has planned a massive industrial expansion that will increase the industrial activity in the area manifold from what it is now.

The districts of Angul, Talcher, Jhasuguda and others in Orissa are rich in natural resources - water, forests, fertile soil, and minerals. As a result, this region has seen high levels of industrial activity including coal mines, thermal power plants, aluminium smelting, iron and steel, sponge iron and others. Not surprisingly, the region has also emerged as one of the most polluted areas in the country. (Only a part of these districts has been designated as Critically Polluted Area, but other parts also bear the impacts of the pollution.)

Black dust from sponge iron plants, discharge of contaminated waste water from industrial plants and run-off from stock-piles of coal, minerals, solid waste to local water bodies like nallahs and rivers, coal ash dispersal due to wind, escape of ash slurry from ash ponds, leaching of contaminants to groundwater are some of the serious facets of pollution.

But pollution is not the only problem. Use of increasing amounts of land for coal ash and solid waste disposal, depletion of ground water due to mining activities and direct diversion of water for industrial purposes, increase in local temperatures due to the industries like thermal plants, are the other impacts in the area, all leading to severe health problems and destruction of livelihoods like agriculture and fisheries.

However, the woes being faced by the people of these districts are likely to be dwarfed by what lies in the future. Even as the area grapples with the problems of pollution, depletion of water resources and displacement, the Government of Orissa has planned a massive industrial expansion that will increase the industrial activity in the area manifold from what it is now. This can be seen as the continuation of the industrial expansion drive of the Orissa Government, which has been marked by the handing over of valuable natural resources of the state to mainly private corporate houses, large scale displacement and intense protests.

Some of the biggest growth in these districts will come in the numbers and capacities of thermal power plants. Currently, the installed thermal power generation capacity in the state of Orissa, most of it coal based, is close to 7500 MW. Now, capacity addition to the tune of 75000 MW is at various stages of planning. Out of this, about 40000 - 45000 MW is just in the few districts of Angul, Jharsuguda, Dhenkenal and Sundargadh. The impacts of this expansion and creation of a concentration or a cluster of thermal power plants are likely to be huge.

Large areas of land will be taken up for the plants, related coal mines as well as for the ash disposal. Air, water and land pollution will increase tremendously. One of the major problems is the impact of the ash generated. Burning of coal generates large quantities of ash with about 40 tons of ash generated for every 100 tons of coal burnt. Consider the 1080 MW NALCO Captive Power Plant in Angul. This plant generates about 7200 tons of ash per day or about 2.2 million tons per year. Though the ash is disposed off into ash ponds by converting it into a slurry and piping it to the pond, it still causes many problems to the neighbouring villages.

According to Krutarth Chandra Singh of village Balaram Prasad, "the ash from the ponds often leaks into the local nallah, Nandira rendering the water useless, and we also suspect that the ash slurry is let out in the river in the night. When the ash dries in the pond, and the wind blows, ash flies every where, settles on our houses, on the raod, on the ponds, rivers and even on our spectacles so that we can't see anything. Our health is badly affected by all this. Six villages are directly affected". In year 2000, the ash pond had breached, spreading the ash slurry all over the area.

One can only imagine what will happen when the ash generation goes up eight-fold from the current levels, when the large number of power plants being planned here come online. 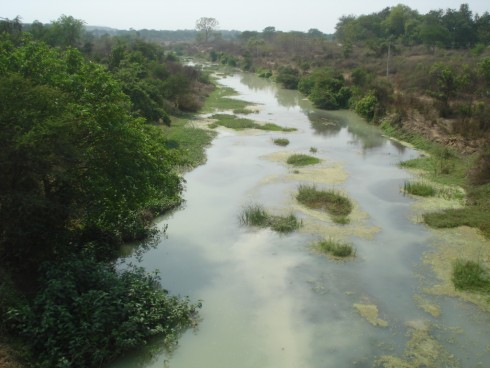 The Nandira river polluted by coal ash near Angul.

However, the biggest impact is likely to be on the water resources of the area. Thermal power plants need large quantities of water for cooling and for ash disposal. The Central Electricity Authority gives a thumb rule for water requirement for thermal power plants as 3.92 million cubic meters per year per 100 MW of capacity. This means that the 45000 MW to be added will require 1700 million cubic meter of water per year to operate.

To put it in perspective, this water is sufficient to irrigate close to 350,000 ha of land. Or, consider that the water needed to supply the entire population of the 11 largest cities in Orissa (at 2001 population) with 150 litres per person per day would be around 145 million cubic meters per year. Note that this is the water needed only for the thermal power plants. It does not include the water needed for the mining the coal required for this power generation.

Combined with the pollution, this consumption of water will have huge impacts on the health and livelihoods of the people in the area. It is no wonder that protests against such plants are coming up strongly in the state. In 2007, more than 30,000 farmers gathered at the Hirakud reservoir, forming a human chain in protest against the allocation of water to industries when they were not getting water for irrigation.

The Siddhivinayak Anchalik Suraksha Samiti of Naraj, Cuttack, is fiercely opposing the 1000 MW thermal power plant being constructed at Narajmathapur, an idyllic village on the banks of the Mahanadi in cuttack district. They are opposing the project on the grounds of displacement, ash and other pollution and the large quantities of water consumption of the project all of which will result in the destruction of agricultural and fisheries based livelihoods.

The last - the water off take of the project - has found resonance with the people of the area. They fear that the massive industrialisation in the Mahanadi basin and withdrawal of increasing amounts of waster for industries from the river and the upstream Hirakud reservoir will have serious impacts on the water resources on which they depend for the domestic needs and for fishing and farming. A Mahanadi Bacho Samiti has been formed in Cuttack to protest against such water withdrawal, including water for the POSCO project which is to be taken from the Jobra barrage near the city.

The response of the State has been to prepare environmental management plans in December 2010 that promise that the current situation of "critically polluted industrial clusters" will soon be alright. The State Pollution Control Board has prepared two plans for the three Critically Affected Areas, namely Ib Valley, Jharsuguda and Angul-Talcher. These plans state that the CEPI has already dropped significantly below the critical level of 70, and will soon drop even further with the implementation of the action plans.

As a response, the MoEF issued a memo on 31 March 2011, stating that the moratorium on considerations of projects for environmental clearance from Angul-Talcher area is being lifted as the state has submitted and initiated the implementation of the environmental action plans. Thus, even though the pollution due to the existing industries hardly been addressed, the way has been opened up for large number of new industries to come up. This is hardly of any solace to the local people.

I travelled around the area in late March and early April this year. The pollution on ground was serious, and people talked only about how bad it was, and no one mentioned any improvement. They have little faith in the Government's assurances that things will change or improve. For example, the Government's action plan for the Angul-Talcher area talks easily about how "A sodium dichromate plant was ... closed in 1998. An estimated 79,000 MT of solid residue which is a hazardous waste is lying near the closed site and releasing hexavalent chromium to the water bodies during monsoon." This is the situation 13 years later!

Or, in the same report, the Government agrees that "contamination of groundwater with fluoride has been found in villages near the NALCO smelter" but villages like Gadharkhai state that little has been done to mitigate or compensate the terrible sufferings they have been put through. Given the track record and the disconnect between the situation on the ground and what's recorded on paper, given the enormous financial muscle and political clout of the big industries that are operating in the area, there is little basis for the people to believe that things will improve.

With the number and capacities of industries like coal mining and thermal power plants likely to go up many times, the situation is likely to deteriorate. Under the circumstances, it is imperative that there is a moratorium not on consideration of new projects for environmental clearance, but also on construction of new projects that are already approved but not taken up yet, till the situation on the ground really changes.

Moreover, today, the monitoring and regulation of pollution is being done mostly in a bureaucratic manner. This has to change to include the local communities and giving them a decisive voice in monitoring and regulating pollution and its impacts. Lastly, the issue of diversion of water to industries with its impacts on agricultural, fisheries and other livelihoods has to be addressed with the central role for the farmers, fisherpeople and others whose livelihoods depend on water.

Unless this is done, Orissa is headed for another round of severe unrest and protests similar to those that have been faced by the earlier round of industrialisation in Posco, Kalinganagar, Niyamgiri and others places.

URL for this article
http://indiatogether.org/orissa-environment