KANDHAMAL ATTACKS
Haunted by the riots
Christian dalits and adivasis in Kandhamal district of Orissa live fearfully among their Hindu neighbours more than two years after large-scale riots against members of their faith. Freny Manecksha reports.
19 October 2010 -

The Christian community of Kandhamal in Orissa, one of the poorest districts of India, was targeted with violent attacks between Christmas day of 2007 and August 2008. Two years on the administration maintains the situation is normal but, in effect, many of the victims still live in terror, a jury of the National People's Tribunal learned in August this year.

Young Esthori, from Gunjiwadi, is one of those for whom the night of 25 August is a terrifying memory. She recalls how mobs attacked Christians like her family in the aftermath of Swami Laxmananda's assassination. Although the Maoists claimed responsibility for the crime, it was the Christians who were made the target. Says Esthori, "Many many people came to the village with sticks and stones, beating drums. We ran away and hid in the jungle for four days. I was very hungry. Today I still feel scared. Some children taunt me for being a Christian."

For 13-year-old Dobin Nayak of Bududipada, Tiangia, the psychological trauma is far worse. A terrified Dobin witnessed a huge mob rushing into his home and setting it on fire. The attackers then turned on the adjoining house and dragged out his uncle Bikram Nayak, a prominent pastor. Bikram Nayak was savagely attacked with crowbars and an axe and then left for dead. The women, including Dobin, hid Bikram in a cowshed where he suffered a night in terrible agony. He later succumbed to his injuries in hospital.

Two years after the horrific attack, Dobin's father Bipin, who deposed before a jury of the National People's Tribunal in Delhi asserts there is no real peace. Those who were part of the attack roam the village with impunity and threaten him with meeting the same fate as his brother.

Deep in the forests in Bogadi hamlet, live Jacob Pradhan and his wife. They work as casual labourers or make platters from sal leaves. Pradhan was caught up in the maelstrom in a bizarre manner when he set forth from his home on 24 August to buy medicines for his father. Totally oblivious of the carnage, Pradhan reached the chemist's shop in Nuwagaon where some RSS workers questioned him. On learning he was a Christian they marched him to the police who took him and two others into custody. He was then charged with being part of the Maoist conspiracy that murdered Swami Laxmananda and three other VHP leaders.

Taken to district headquarters of Phulbani they were stripped to their underwear, chained, locked up in a toilet and questioned repeatedly by the police in flagrant violation of all human rights. Then taken to Bhubaneswar, Pradhan was paraded as an accused and made to undergo a polygraph test before being suddenly released after 40 days of custody. No charges were eventually filed.

Meanwhile his home had been destroyed and his daughter narrowly escaped a sexual assault. After five months in a relief camp, Pradhan came back to his hamlet but in a complete travesty of justice he has not been successful in filing an FIR against those who destroyed his home. Nor have cases been lodged against those who held him and tortured him.

Esthori, Nayak, Jacob ... like them there are thousands of other Christians, mostly Dalits (known locally as Panas) and adivasis (Kondhas) who are still awaiting justice and accountability for the attacks that took place in their district. According to official figures more than 600 villages were attacked, 295 churches destroyed, 54,000 people left homeless and 38 people were killed. More than 10,000 children had their education severely disrupted due to displacement and fear.

Even these numbers, says Father Ajay Kumar Singh of Jan Vikas (a Christian organization working for social empowerment) would have been much higher had not the forests provided refuge for the thousands who fled there.

Yet civil society's response to this sectarian violence has been hugely muted in comparison to Gujarat. Singh and other activists are perturbed by the hostile justice environment whereby victims, living cheek-by-jowl among their attackers, have not been given witness protection and are coerced into saying they cannot recognise those who carried out the attacks.

Civil society's response to the sectarian violence in Orissa has been hugely muted in comparison to the attention paid to similar atrocities in Gujarat.

Why did Kandhamal erupt? The reasons behind the violence - whether it was ethnically motivated, or part of a carefully designed communal strategy - is a subject of heated debate. The region has some of the poorest socio-economic indices in the country. Its population (2001 Census) comprises of 51.96 per cent Schedule Tribes (Kondhas) and 18.89 per cent Schedule Castes (Panas or Dalits). Until 1949 the Panas were also known as Hill Tribes but were then delisted and classified as Dalits. Subsequently they began making demands for Schedule Tribe status on the grounds that they speak the Kui language. Consequently there were some simmering tensions between the two over land issues and allegations against Panas (many of whom converted to Christianity and lost SC benefits) of acquiring false certificates.

It was against this background that Justice Sarat Chandra Mohapatra, appointed to inquire into the violence, declared the Kandhamal violence to be ethnic in nature, sparked by the issue of certification by the Panas. His remarks were widely picked up and endorsed by the Orissa media.

However many of the victims and other organizations have protested vociferously saying the communal nature of the attacks and the specific role of saffron groups cannot be ignored. The Sampradayik Hinsa Prapidita Sangathana complained to Chief Minister Naveen Patnaik and accused Mohapatra of not unearthing true facts but making irrational conclusions and judgments. Several affidavits also categorically say that leaders of the Vishwa Hindu Parishad and Bajrang Dal led the mobs. In particular the name of BJP member, Manoj Pradhan, who has been convicted by the fast track court in two cases, figures prominently. Patnaik too has admitted that several VHP and Bajrang Dal members were arrested in connection with the attacks.

A number of affidavits also affirm that the Christian and Hindu communities among the Dalits and Kondhas had for decades lived in harmony and celebrated festivals together but that the atmosphere was vitiated by inroads of the VHP who raised the bogey of proselytisation and forced conversions by Christians. Nimontee, whose son Dasharath was killed by locals in 2008 says she is shocked at the extent to which the amicability has been replaced with a communally charged mood. Slogans like "If you see a Pana cut him down instantly," still rend the air.

Observers say the communal cauldron was stirred up by Swami Laxmananda who became known for his inflammatory rhetoric. The VHP's base in Kandhamal also grew in strength with the influx of traders and small businessmen from the coastal strip. The National Solidarity Forum - a platform of concerned activists, media persons, film makers and others in its report - is emphatic that communal forces used religious conversions as an issue for political mobilisation and to incite horrific forms of violence and discrimination against the Christians of SC origin. 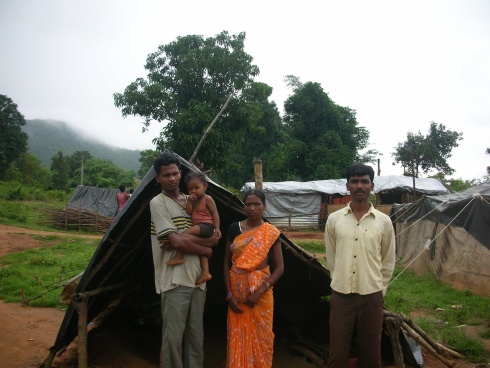 People in Nandagiri live in tents and makeshift quarters as they cannot return to teir villages. They have been warned they must convert to Hinduism if they want to return.

Kedar Mishra, Chairman of the Orissa Samskruti Academy disputes the notion that proselytisation and missionary activities were the key reasons for the build up of tensions. Orissa, he points out, is 95 per cent Hindu (if one includes tribals among the fold) while Christians account for just two per cent. He says early missionaries were well received and respected for compiling the first Oriya grammar texts and dictionary. The image of the Christian community as a peaceful one underwent a metamorphosis only after the coming of the RSS, who raised the issue of forced conversions.

Mishra, who has presented a paper on the media's role in Kandhamal, points out that Orissa has a particular law against forcible conversions or those converted under allurement. Why have no cases been filed so far? he asks.

Ironically it is the Pana Christians who have complained of being coerced to repudiate their faith. Many families from Betikola, Killakia, Rautingia and others now live in tents and makeshift shelters at the small settlement of Nandagiri because they were told in unequivocal terms they could not return home from the transit camps unless they renounced Christianity. In another instance some women of Barakhama, which has a sizeable population of Christians, were forced to apply sindoor on their hair, an overt sign of being Hindu.

However there are heartening examples of people who refused to let the communal sword cleave the community. One such woman is Ramonti Malik of Pattama village, who defied threats of the RSS and her own Kondhas and sheltered several Pana Christian families for four days in August 2008. "They are my people," she says. "It makes no difference what faith they choose to practise."

URL for this article
http://indiatogether.org/orissa-society