GEO-POLITICS
What if Pakistan implodes?
India would do well to consider its options in light of its national interests. Loose nukes are certainly a concern, but talk of taking them out is cavalier, and we must put the brakes on that, writes Firdaus Ahmed.
28 February 2011 -

Nuclear safety and security in the subcontinent have been among India's concerns. Recently, the National Security Adviser had this to say: "there is an increasing danger of terrorism spreading from those parts of Asia, like Pakistan and Afghanistan ... The security of nuclear materials and weapons in those same parts of Asia is another example of the sort of problems that we face." (Indian Express, "Towards a New Asian Order"). These fears have been around ever since the United States commenced military action in the region against terrorists and their supporters.

In international fora, the spectre of a 'failed' Pakistan, and the resulting threats to nuclear safety have been played down, generally, but they cannot be ignored altogether. The answer so far has been to pressure Pakistan to maintain vigilance, with the US providing more substantial material and technical support. With the assassination of Salman Taseer, the personnel reliability program has come under cloud. Various scenarios of Pakistan going under finally, although still far-fetched, have also gained life in light of uprisings in Arab lands.

Take out the nuclear weapons?

A government-funded think tank believes it has the answer to the development of such a threat. In its view, "in case there is ever a successful coup led by radical extremists with the support of disgruntled elements in the Pakistan army, nuclear warhead storage sites will need to be bombed so as to render the warheads ineffective. For this contingency, India must consider providing military and logistics support to the US and its allies" (see this link).

We only need to remind ourselves of Chernobyl, while mulling over this advice. Of the population of about six million in the affected area stretching from Ukraine to Belarus, an estimated 5000 died of radiation effects according to WHO figures. In a country of 175 million people with another 100 million or so Indians in close vicinity, the possible casualty figures are mind-boggling. In case this advocacy was part of internet cacophony, it could have been easily ignored. But coming from a military-linked think tank, it calls for closer scrutiny.

The 'allies' the writers refer to include Israel, referring to drills in the Negev desert between Israel and the US on how to 'take out' Pakistan's or perhaps Iran's crown jewels. The levels of cooperation they suggest cannot emerge out of a vacuum. The interoperability developed through multiple exercises, some involving Special Forces, indicates that a capability has been built. The somewhat nebulous military relationship with Israel, built around technology transfer, indicates that Israel can call collect. The grounds are being prepared through such writings on think tank websites for a contingency.

India would do well to search for alternatives.

The risks of intervention

It is readily accepted that India needs to intervene in some manner on the side of the besieged rational-secular element in Pakistan, in case the challenge of radicals goes beyond limits. But the scenarios for such intervention are also dismissed too quickly, since, as a noted Pakistan watcher Sumit Ganguly put it, "Pakistan is not Egypt". Nevertheless, this alternative is something we must discuss, lest the advocacy for intervention assume dominance by default. 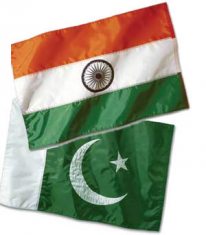 In a country of 175 million people with another 100 million or so Indians in close vicinity, the possible casualty figures from an attack on nuclear sites are mind-boggling.

Assuming Pakistan slides into its oft-predicted but perpetually eluded 'failed state' status through a civil war, the Indian interest would be to ensure that the secularists in that country prevail. Towards this end India may choose to be supportive. However, the opposition can be expected to cash in on the backlash of that group associating with India. In case this backlash is more powerful than Indian exertions, the secularists are unlikely to be saved. It would be best, therefore, for India to keep any support it provides covert.

As for allowing other countries to use its national territory for more proactive uses, India must be prepared to end up as a 'frontline state' if it makes this choice. Given the dubious benefits of this distinction for Pakistan over two periods in the eighties and last decade, the price India would have to pay can be easily imagined. Those desiring a closer engagement with the US and Israel may not mind such a development, but the historical record is quite clear - countries have not benefited from an overly close asymmetric relationship with the United States.

If the secularists find support within Pakistan itself, they could hold out for long against the Islamists, but in that case the civil war would be both brutal and prolonged. To some that is not such a bad thing - since keeping the instability restricted to Pakistan would be better than permitting its spread to the region in case of an Islamist victory. However, there is no guarantee of a secularist victory. That the secularists have themselves brought on such a catastrophe through policies such as ignoring land reforms, education etc. implies they are not necessarily the better side.

But staying out of Pakistan's affairs would have one benefit, in case the secularists are displaced. India would be better positioned to engage with the opposition, even if Islamist, in power. Engagement can help socialise the new regime, whereas efforts at containment are likely to make it expansionist in reaction. Reassurance may be a better strategy towards normalising the regime. This would serve the larger Indian interest in regional stability.

What does this imply for the crown jewels - the nuclear weapons? Taking them out of circulation may prove possible with the help of secularists guarding the facilities and assets. However, firstly such action can be expected to instigate fighting over their possession, endangering them further. It is better instead that the victor be allowed the spoils without turning the sites into dangerous battlefields. This way there would be greater hope of central and local authorities continuing control. Secondly, there is no guarantee of taking out the complete inventory. The threat from those remaining in the wrong hands would be considerably more. India, being closest at hand, would be in the line of fire, more so than the US or Israel.

India would therefore do well to consider its options in light of its national interests. That the US is threatened by loose nukes is certainly an international concern. The response to this threat is not necessarily through intervention, but by defusing the 'pull factors' that cause the threat, such as the violence of the Islamist opposition. American support for authoritarian regimes is as much to blame for this as anything else. If there is a message from the Arab revolt, it is that democracy is the best safeguard against radicalism. Preventing a collapsed Pakistan and ensuring its soft landing in secular hands is therefore a better strategy.

It is important to refute the irresponsible advocacy not only so that taxpayers' money is not ill-spent, but to prevent the group-think that may result from such ideas being posted as the 'only option'. There are always other options, if we choose to think first.

URL for this article
http://indiatogether.org/pakistan-op-ed