AUTO DEALER GOES ECO
Softening hard water with rain
Rainwater harvesting need not be limited to household purposes. It can be successfully implemented to solve water problems in commercial establishments too, as demonstrated by an automobile dealer agency in Mangalore. Shree Padre has more.
27 October 2008 -

Mandovi Motors is a well-known automobile dealer agency with operations in several cities in Karnataka. It's Mangalore agency is located at Hampankatta, in the heart of the city. This outlet consumes around 25,000 litres of water everyday for servicing more than a 100 cars.

Out of the two yielding borewells they had years ago, one had dried up in barely six months after its commissioning. The second one now belongs to others as they sold out a portion of the land. This situation posed a complex problem before the firm: how can we ensure sufficient water for the business to run smoothly? 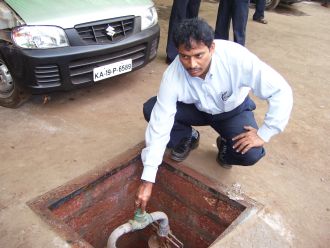 Let us dig a new bore well, suggested Parshwanath, DGM of the company. Digging is alright, but how long will it give us water? queried the MD. That question made the DGM rethink the issue from a sustainability perspective.

The massive roof of the workshop drew Devaraj's attention. It covers an area of 360 square metres. Calculating at the rate of 3500 mm average rainfall of this district - Dakshina Kannada  the roof catches 12, 60,000 litres of water. Devaraj advised to recharge the new borewell using this water.

Since the available rainwater was abundant, they had to dig out a large infiltration pit around the casing pipe of the borewell - 15 feet length, 12 feet breadth and 5 feet depth. Using boulders, granite stone pieces and sand - all filtering materials - the pit was refilled. Later it was covered with a strong iron lid so as to permit vehicles to run over it. This was in 2002.

After that, not even once has rainwater overflown from this pit, explains Parshwanath. Six years have passed since then. We havent faced any water shortage. Before the new borewell and recharge arrangements were done, they had to buy tanker water for a month toward the end of summer. This cost them Rs.1,500 everyday. They endured this crisis for three to four years. Getting crystal clear water, albeit for purchase, was difficult. It used to be a bit muddy. Washing the luxury cars with that water was really painful. But there was no other alternative. Or at least thats how they thought it.

There are some borewells that yield water with 600 TDS (Total Dissolved Solids). Normal TDS is 150. But the authorities are now saying that its okay up to 500 TDS."

"I was amazed to see that in Attavar in Mangalore, a recently dug borewell has water with TDS as high as 6,380.

Not only this, Mandovi Motors had another worry too. Cars serviced here developed pale white patches on the glasses. The bodies too weren't spared. The patches on glasses looked somewhat like spider webs. They used to pose problems for the driver especially on monsoon nights when the vehicles coming from the other direction flashed their bright headlights. A few customers had even complained about this. But nobody knew why this problem occurred after the car wash.

Interestingly, now not only our water crisis, but that white patch problem has also vanished," informs Parshwanath. Now he has realised that the patches were due to the hardness of the borewell water. The dissolved salts were causing these once the water dried. Dilution of this water with soft rainwater has now solved the problem. As such, rainwater harvesting not only increases the quantity of available water, but also betters the quality.

"In such a heavy rainfall area, I never thought that water would be so hard," recalls Devaraj Reddy. "I have started studying the hardness of Dakshina Kannada water since the last three to four years. I am really surprised. There are some borewells that yield water with 600 TDS (Total Dissolved Solids). Normal TDS is 150. But the authorities are now saying that its okay up to 500 TDS. I was amazed to see that in Attavar in Mangalore, a recently dug borewell has water with TDS as high as 6,380," says Reddy. 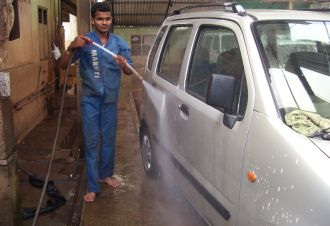 Reddy studies have shown that the quality of water from borewells up to a depth of 100 feet is okay. But the deeper ones have calcium, magnesium and other salts in it. "This is really a serious problem. Scale formation in boilers and irrigation pipes is a newly occurring problem. Now that the water table has gone down considerably, there is no guarantee that one will strike water even in such deep borewells. And even if it yields, this hard water would pose headaches, says Reddy.

Instead of taking such risks, says Reddy, a sustainable option would be to store rainwater or to dilute the hard water by artificial recharge of borewells. The coastal people of Karnataka are under a wrong notion that the aquifers here are so rich that wherever you dig a borewell, getting water is almost sure. It is time for them to think about other sustainable options.

Parshwanath poses a valid question, If the hard water gives so much problem for a car, how will be we human beings fare?"

Apart from water harvesting, Parshwanath has implemented many energy saving techniques in both their Hampankatta headquarters as well as Adyar workshop that was opened two years ago in the Mangalore suburbs. Because of the polar orientation of the new building  positioning it in east-west direction  and allowing one foot gap at top of the wall below the roof for faster circulation of air and such other measures, this workshop enjoys temperature that is five to seven degrees cooler than outside environment. No wonder they havent installed fans of any kind! It feels like air conditioning inside, says Parshwanath.

All these efforts have bagged Mandovi motors Mangalore a national award from Maruti Suzuki India Ltd for 'quality improvement and cost savings through eco-friendly practices'.

URL for this article
http://indiatogether.org/rainhard-environment