VIDARBHA COTTON CRISIS
Another farmer ends life, villagers distraught
"In the time of crisis, when no helping hand is coming forward to rescue us, we have to manage ourselves," says Bhagwat Jadhav, a resident of Bondgavhan village in Vidarbha. His neighour, cotton farmer Ramesh Rathod committed suicide recently. "It could be our turn tomorrow," says a worried Jadhav. Jaideep Hardikar reports.
12 December 2005 -

Bondgavhan, Yavatmal: When Ramesh Rathod was nearing his end, the villagers of Bondgavhan assembled for a quick meeting in one corner of the rural hospital. After a brief discussion the illiterate and poor villagers began collecting all that they had in their pocket at that time. Yet the total collections were still short by Rs 120; they needed Rs 450 for the post-mortem and transporting Rathod's body to the village in a hearse van, and they could collect only Rs 330. Then a veteran had a word with the hospital superintendent.

Ramesh Rathod made every effort to come out of his debt  he sold his cattle, went for better seeds, even Bt this time, but every time he ended up with more debts and more losses. He had no irrigation facility either.

•  Vidarbha: end of innocence
•  No cheques, no balances

"He was a kind man; he did not press for payment of full money after Ramesh's death," say the villagers in gratitude. They have yet to pay the remaining amount to the hospital, they inform. The villagers, 17 of them, equally poor, performed last rites the next morning from the collections again.

Ramesh died on November 8, 2005. Thirteen days later, villagers pooled in more money  this time for the post-death rituals. Banjaras, who are nomads, follow the Hindu rituals. So they performed the rituals sans a Brahmin, says Ramesh's 12-year-old son Pintu. There was no money to pay for a priest, he says. The Banjara families left their nomadic traditions long ago and opted for farming like the original inhabitants.

Dharmibai, Ramesh's widow, shivers at the thought of her future. "Had the villagers not contributed money, we would not have been able to cremate him," she cries, grieving the untimely demise of her companion. The widow says they suffered losses on their three-acre farm for years.

When Ramesh consumed pesticide on November 8, his bank balance had tanked to Rs 52. "We made all efforts to save him," lament villagers. "But it was too late when we finally reached the hospital in a bullock-cart from our village that evening. Ramesh had consumed a full bottle of pesticide."

Ramesh had borrowed around 800 rupees in 1995 from a cooperative bank and failed to repay the loan. "It had shot up to Rs 15,000 along with the interest on the capital," says Dharmibai. "A few days ago, we received a notice from the bank to repay the loan. He was under tension from that day. For, he had also borrowed money from private moneylenders." 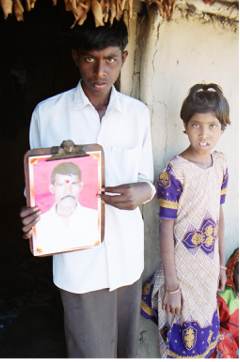 The day since her husband died, Dharmibai has taken ill. The widow is gripped with fever, fear of the moneylenders and burden of the entire family  her mother, a son and a young daughter. "All we've got with us is Rs 52," she wails, as the beleaguered villagers contribute more for this bereaved family since government help is far from the sight.

This is harvest time. Vidarbha's cotton cultivating districts are witnessing death and distress, with the number of farmers ending their own lives rising dramatically with each passing day. "It is as if the farmers are staging a suicide protest against the unheeding government and a society that has not cared to take cognizance," fumes Kishor Tiwari, convenor of the Vidarbha Jan Andolan Samiti (VJAS). "The fact that there is no intervention from the government indicates that it is no more an issue for the thick-skinned insensitive rulers of the state." Tiwari notes that the crisis tells upon the entire village. "Only one farmer may commit suicide, but the economic problems confront the entire village. It is the economy of the village which is in the peril," he says.

From all angles, Ramesh's death looked imminent. For seven long years, he struggled hard to break even, but the economics of farming fueled by the fast changing global processes had set in a crisis that was beyond his apprehension. "He made every effort to come out of the debt  sold his cattle, went for better seeds, even Bt this time, but every time he ended up with more debts and more losses. He had no irrigation facility either. Of late he was ailing but had no money to treat himself," says Madhukar Rathod, a veteran, unrelated to Ramesh. "It's not as though we did not know his condition. We tried to help him in all possible ways, but his pride was hurt every time. He was aware that all the villagers were also in the same condition."

Rathod says that Ramesh's loans had soared to roughly Rs 55,000, including private debt. Because he had an outstanding loan at the district central cooperative bank, he could not get any fresh credit. "Last year he married off his daughter to his nephew in the neighbouring village. That was because he had no money for dowry and a lavish marriage ceremony. His elder sister knew his problems and agreed to accept his daughter as her daughter-in-law. He was much relieved."

Apparently, there was a severe pest attack on the Bt (Bacillus Thuringeinsis, genetically modified variety) cotton crop in Ramesh's farm. There were other complications too. The leaves of his cotton plants turned red before drying up. Ramesh had purchased legal Bt seeds -- Bollgard brand MECH 162 variety costing Rs 1800 per 450 grams -- from companies having commercial license from Mahyco/Monsanto. He was certain these were not spurious seeds. The official price is Rs 1600, but the local inputs dealer in Vidarbha levies an additional Rs 200 when a farmer like Rathod procures it on credit. "He was staring at further losses because he had spent a lot of money on inputs this year, and the yield was destroyed irreparably," say villagers.

"Who will compensate for the loss of his life now?" asks Dharmibai. "We were told that Bt seed will change our lives," she adds. It has, but for the worse. "In three acres of land we haven't got even three quintals of cotton this year. It has all been eaten by the pest despite spraying chemicals." Dharmibhai says she used Endosulphane and Tracer - two costly pesticides -- used against the bollworm pest which attacks cotton crops.

Add to these losses the rising health problems in the region. Strangely, for some reason, many villagers are sick. That is partly due to the power crisis. "Sometime we get power at night, so those who have irrigation and pump have to water their farm in the dark, and doing so in the winter comes with the obvious risks to health," explains Mainabai Chavan. "Yes, many of us are running fever because of that, but where is the money for treatment?" ask villagers, still to come to terms with Ramesh's suicide.

The tragedy is pervasive. Dharmibai's old mother Totibai has stopped eating for three days now. She is having an acute stomach ache. "But we can not take her to a doctor, that will be an additional expenditure of Rs 300 for one trip. We can not do anything, it's left to God now," murmurs a distraught Ramesh's widow.

Notes Sunita Raut, the village Sarpanch: "We never thought a person as strong as him would commit suicide." She wonders that if this crisis could shatter the confidence of a mentally strong person like Rathod, what would it do to weaker people? "These days when men go to their farm, women pray for their safe return home, such is the concern among them. At the back of their mind they fear their men too could take the extreme step," she says.

Ramesh, remarks another neighbour Bhagwat Jadhav, epitomized the condition of every villager here in this Banjara-dominated village of the district's Ner block. In fact, he was a symbol of crisis-ridden farmers in entire cotton belt of the western Vidarbha. "All of us are bankrupt and indebted to private lenders," says Umesh Raut, Sunita's husband. "Some of us have multiple loans. We don't know how we will clear all our debts." Umesh Raut is among the villagers who raised money for Ramesh's funeral.

"We feel it's our responsibility to help this family. It's in the worst state. We will do whatever we can, collectively," say villagers. "In the time of crisis, when no helping hand is coming forward to rescue us, we have to manage it ourselves the way we can," says Bhagwat. "Who knows!" he adds, "It could be our turn tomorrow. If we don't help them today, nobody would help our families if  God forbid  we too end ourselves."

URL for this article
http://indiatogether.org/rathod-agriculture