“Niyamgiri Chhadibu Nahi (We will not leave Niyamgiri).” With that declaration on 18 July, the adivasis - Dongria Kaundhs and Kutia Kaundhs - of Serkapada hamlet, Odisha voted emphatically against Vedanta’s bid to mine for bauxite on a mountain they hold sacred and against an activity that threatens to annihilate their sustainable lifestyle. A media report speaks of five platoons of CRPF being deployed during the gram sabha proceedings and the adivasis arriving waving sticks and axes. Since then a few other gram sabhas have also said ‘no’ to Vedanta. But the final victory is perhaps a long time to come yet.

Reading this and other news reports, however, triggered a vivid flashback in my mind. I felt I was back in Muniguda among the Dongrias brandishing their axes and long sticks and vowing a fierce fight against Vedanta. So vivid are some of the scenes in Sanjay Kak’s film Red Ant Dream screened last month, that one cannot help but agree with documentary filmmaker Surabhi Sharma (who introduced the film at the Mumbai screening) that Kak has a genius in taking you ‘right into the frame.’

Apart from the immediate relevance, I was also reminded of the film’s leitmotif based on Bhagat Singh’s lines “Let us admit that the state of war exists and shall exist........and war shall be incessantly waged.”

Like Kak’s earlier films - Words on Water, which was about people’s movements against dams in Narmada Valley and Jashn-e-Azaadi, on the self determination struggle in Kashmir - Red Ant Dream is about resistance. This cinematic essay is an attempt to celebrate the idea of resistance. It lyrically explores the right to rebel (jus resistentiae) and the attempts by people to transform unjust political orderings. 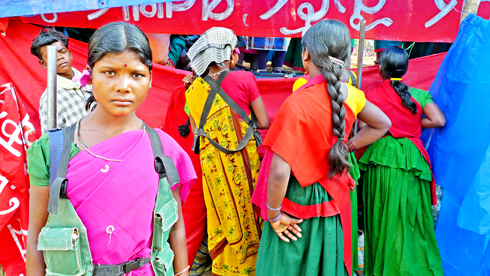 Bhumkal celebration re-enact the fight against the British by adivasis, performed by the cultural wing of the Maoists - the Chetna Natya Manch. Pic: Red Ant Dream

The film focuses on three communities of resistance: Bhagat Singh’s legacy and the old socialist traditions in Punjab, particularly among the peasantry; the armed insurrection in Bastar headed by the People’s War Group, and the adivasi community’s struggle against mining and the Vedanta aluminia refinery in Odisha. In these seemingly disparate narratives, there are common strands and ideas which are ingeniously portrayed by Tarun Bharatiya’s masterful editing of visual and aural idioms. Music, poetry, songs, dramatic skits are the cadences flowing through the film giving it fluidity and inter-connectedness. The dialectical arguments and ideas are presented through deft juxtaposing and counter posing.

Red Ant Dream opens up new frontiers and people. The opening frames plonk us into largely “invisible domain” - Bastar, Chhatisgarh, where there are two opposing armies. Inside the jungle, almost merging with the leaves, trees and crawling ants, are the Maoists, moving and going through their daily physical exercises with ease. Outside this world, security troops jog on a tarred highway. The voice of officialdom - AIR’s news bulletin - dominates the soundtrack. It then gradually but surely fades away with the revolutionary song of the Maoists demanding  - Jawab Do. Jawab Do.

As the film progresses, the images of war take on new avatars. In the age of globalisation and economic reforms, the state is increasingly colluding with corporate clout. As Lingaraj Azad, the leader of the Niyamgiri Suraksha Samiti says, “The two (the government and the Vedanta Company) have become one.” So, in Lenjigarh it is the Vedanta aluminia refinery with its fly ash and billowing smoke that has declared war on the adivasis’ right to clean air and the environment. In Lakhpada, the hamlet that refuses to be displaced, adivasi Lodu Sikkaka declares that the fight is on, “for our children, our grandchildren. The fight is for our land and air.”

Does the adivasi who sings and exults in the "cold, cold" clear waters cling to an obsolete and unfeasible life? Or are he and his ilk illustrating a brand of eco-activism which refutes the notion that nature is a resource for profit alone? Can the value of land be measured in economic gains if one steals the next generation's rights to water?

•  Niyamgiri gets time to breathe
•  The fog of jungle warfare

The camera caresses the limpid waters of the streams and waterfalls that will exist only as long as the bauxite is there. It suggests Niyamgiri’s wealth lies in bauxite that enables perennial springs. But, notes the commentary, the “appetite” of the refinery for bauxite is so great that it could level a mountain like Niyamgiri in a few years. Does the adivasi who sings and exults in the “cold, cold” clear waters cling to an obsolete and unfeasible life? Or are he and his ilk illustrating a brand of eco-activism which refutes the notion that nature is a resource for profit alone? Can the value of land be measured in economic gains if one steals the next generation’s rights to water?

Historicity and the political role of memory is also a rich vein coursing through the narratives and it is in a scene in Bastar that this comes alive in all its splendour. The cultural troupe, the Chetna Natya Manch, is celebrating Bhumkal (meaning when the earth shook) centenary. Using straw to depict blonde hair and miming the action of horses, the troupe enacts scenes from 1910 when adivasi chieftain Gunda Dhur pushed back the British. The sheer energy and robustness of the troupe in re-creating the legacy of the anti-colonial struggle is memorable, even as the film asks how this war will be remembered. 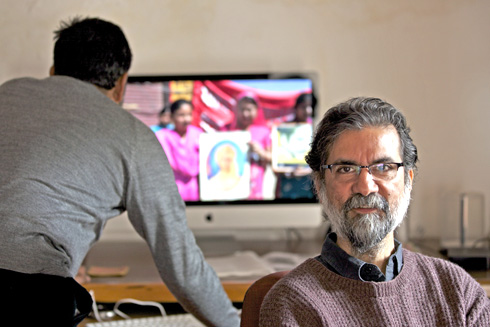 The answers are perhaps forthcoming in scenes shot in the School for Counter-Terrorism and Jungle Warfare at Kanker. An acute sense of irony, dare one say parody, pervades when we see the new forms of colonialism - troops on horses, bugles being blown, dogs being trained and battle cries to counter the Lal Salaam. Brigadier Ponwar declares that the war is about bringing order in disorder and “creeping re-occupation of territory.”

The use of grainy footage from propaganda videos circulated by both the Maoists and the state challenge this notion, however, and the hypothesis of an ideal war as articulated by Clausewitz, the military theorist. In a remarkable coup d’ etat, Kak shows us raw footage of one propaganda video by the state that had been edited out. It shows the slain Congress leader Mahendra Karma chillingly demonstrating the ruthlessness of the Salwa Judum - the counter revolt that the state claims sprang up spontaneously. We see a young man, Chandru, being picked up and hustled away with the ominous “You will tell us everything.” And there is Mahendra Karma ordering the adivasis to sit only when he gives a command and demanding that the Lal Salaam be replaced by an Om.

Later in the film there is another video that has a police officer ordering forces to burn their villages and saying, “if any journalists come to cover the Naxalites, just get them killed.” In another video, shot by the Maoists who interviewed villages affected by the horrendous violence, we hear a widow talk of the brutal manner in which her husband, Koval, a Maoist was killed by the Salwa Judum - eyes gouged out, limbs chopped, heart thrown out. Entire villages were subsequently burnt. 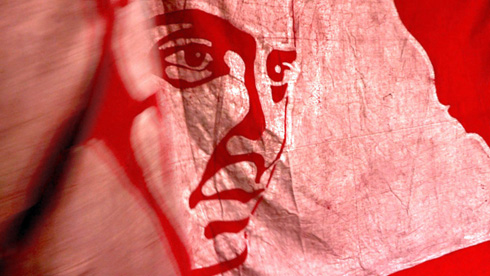 Paash, the revolutionary poet of Punjab is often evoked in the film. Pic: Red Ant Dream

Then cutback to a woman guerrilla, short-haired and with a dazzling smile, who elaborates on how all this stirred huge anger in the villages. And in the dark of the auditorium, I get some inkling of why the gruesome death of Mahendra Karma in May this year became such a moment of triumph for the Maoists and their supporters in the villages. The film weighs in heavily on the side of these “invisible people” who will never make it to the TV studios whenever a discussion on Maoism or the “nation’s gravest security threat” takes place.

In Punjab, the images are of the war against the capital intensive development agenda. Field workers harvest wheat against the backdrop of huge mounds of fertilisers - fertilisers that spurred a Green Revolution but eventually led to agrarian distress. On a highway a flashy white car whizzes by a humble scooter carrying a family waving the red flag. Lines by Avtar Singh, “Paash,” the cult revolutionary poet who was killed by fundamentalists in 1988, resonate with present times. (“If the security of the nation demands that every protest be extinguished in the name of peace..........then that security of the nation is a threat to us.”)

The true meaning of Bhagat Singh’s sacrifice is contrasted against the bids by political parties like the Congress and Akali Dal to appropriate his name. The idea of “united resistance” is articulated by Amolak of the Punjab Lok Sabhyachar Samiti. Harking back to the Royal Indian Navy mutiny in 1946, he also recalls the Kakori conspiracy, the Ghadar party and more recently, Lalgarh and Singur. Displacement and livelihood issues are not restricted to Central India, he says.

The continuity of the struggle is suggested in a compelling scene towards the end of the film. The guerrillas who have met with the film team and whom we have got to know fleetingly are preparing to march on. Farewells are said to the villagers and the women guerrillas in single file stop to shake the hand of each young girl in the solidarity of a Lal Salaam. Can this be read as subtle coercion to join the movement or do we choose to read it as passing the torch to the next generation and perpetuating resistance? Then the guerrillas fade away into the forest and one is left with an almost palpable sense of loss as one is jerked back into a familiar but jaded world.

The film has received a range of responses from critical acclaim to discomfort in cities where it has been screened - Delhi, Mumbai, Pune, Srinagar, Amritsar and Chandigarh. At the Mumbai screening, there was criticism over the fact that the film showed a selective history of Left movements. Another person stated the film was propaganda for Maoists. Kak, who refuses to take a didactic approach, says each one is free to connect with the film in whatever manner he chooses. But unsettling viewers is perhaps very much on the agenda. He says, “it is hopefully a valuable space in which other dialogues will continue.”

URL for this article
http://indiatogether.org/redant-reviews