Chor Bt aur Bt chor
Fake and costly inputs have placed lakhs of farmers in grave danger. Further, despair has led many to embrace costly Bt cotton as some kind of magic bullet. Meanwhile, Bt cotton has not only been attacked by other pests, it's been struck by the bollworm itself. For many, the results could be deadly, writes P Sainath.
29 September 2005 -

What does it take to be a seller of seeds in Maharashtra? A diploma in agriculture? Or one in engineering? What skills do you require?

"Only one," smiles K.K. Milmile. "You need to know how to count the money that comes in." Milmile is one of the biggest input dealers in Yavatmal district. And he worries about the fake inputs plaguing the farm community in this cotton territory. Quite a few suicides are linked to the damage these have done. The ongoing season could see many farms in Maharashtra's Vidharbha region sunk by this problem alone.

"Maybe 90,000 packets of legal Bt cotton have sold in Yavatmal this season," says Milmile. But here's the catch. "About 2.5 lakh packets of 'illegal' Bt seed have also been sold. What damage will these do? It's scary."

No less scary, though, is the 'legal' Bt cotton seed itself. In Andhra Pradesh approval for three varieties of Bt cotton seeds has been withdrawn following disasters there. Here, bloated claims of performance have sold many packets but ground realities are grim. "Here," says Suresh Bolenwar in Hiwrabarsa, gifting us a bollworm from a plant in his field right in front of us. "This is 'legal' Bt for you. It needs spraying for pests other than the bollworm - and now for the bollworm itself." Major newspapers in Vidharbha have begun reporting more bollworm attacks on Bt cotton in the region. 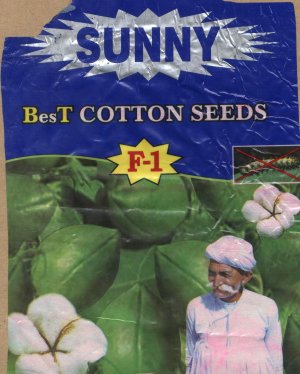 'Illegal' or 'non-royalty' Bt cotton seed packet. With no manufacturer's name or address on it. Dubious inpits are a major threat to farmers this season. However, the risks with 'legal' Bt are no less. (Photo by P Sainath)

Bolenwar says some farmers have done better with 'illegal' Bt cotton . In Wardha, kisan leader and farm activist Vijay Jawandia scoffs at the term 'illegal.' He calls it "non-royalty Bt." "All it means is that Monsanto and other companies won't get Rs.1,250 in royalty on each packet. That is how much they extort from the farmer. Both types of Bt are equally risky, anyway," he laughs.

He has a point. If `legal' Bt cotton could shatter Bolenwar's large holding, 'fake' Bt cotton (or 'chor Bt' as people here call it) killed small farmer Ramkishan Thakre. The packet of seed that he used bears the brand name "SUNNY" on it. It bears no manufacturer's name or address. "BesT Cotton seeds" says the packet, emphasising the 'B' and 'T' in 'Best' - to pass it off as Bt.

This is the "non-royalty Bt" mainly from Gujarat. It sells at Rs.850 a packet (against Rs.1,600-plus for 'legal' Bt cotton and Rs.450 a packet for hybrid cotton seed). It is sold by "direct marketing" in the villages. Often through local creditors enjoying leverage with the farmers.

Equal numbers are at risk from 'legal' Bt cotton. Many are buying into false claims of yields between 12-18 quintals per acre. "There is no evidence they will get even seven quintals per acre," says Jawandia. "Very often Bt's own literature shows us how false the advertisements for it are."

Besides, sowing Bt cotton could cost a farmer Rs. 3,000 to Rs. 4,000 more per acre than hybrid cotton would. The seeds are three times costlier. It means far higher spending on irrigation and fertilizer. And, as Bolenwar shows, it still needs spraying. The fiasco in Andhra Pradesh supports his finding. And also trashes Bt's major claim - which is less spending on pesticide. So the 'profit' it brings to the small farmer is highly suspect.

Another major worry is that very few Bt fields show the "buffer zone" that is supposed to surround Bt cotton. That is, a border of non-Bt crop. That buffer is meant to ensure the pest takes longer to develop a resistance to Bt cotton.

Its absence could devastate both Bt cotton and next door non-Bt crops, say farmers here. They fear this could see the rise of a "super pest."

But Bt cotton or not, the larger issue of spurious inputs is explosive. Fake stuff exists in fertilizer and pesticide as it does in seed. And the scale of it is massive. So-called legal producers have been behind some of the fake inputs.

Yavatmal has some 1,200 krishi kendras today. That is double the number a decade ago. It has just one quality control inspector for the whole district. Most shop owners have no qualifications for their role. But as Collector Harshdeep Kamble points out, quite reasonably, a diploma-holding input dealer could be as bad as the others. "If his intent is wrong, there will be damage," he says.

At that level, this is true. The fact, though, is that the scuttling of larger regulatory structures in agriculture has brought immense harm.

"Private seed companies," points out Jawandia, have been given "a free hand in the name of research cotton. There are no regulations, no scrutiny. Agricultural universities put out no more than 3-4 varieties in 10 years. Then how do these companies bring twenty varieties to the market in ten years? Because that's where they are doing their testing. On the lives of the farmers. Using them as guinea pigs in experiments that could destroy millions."

With the banks turning down lakhs of farmers seeking crop loans, many turn to their inputs dealer as the new moneylender. Ramkishan Thakre had bought his bogus seed from his creditor. "I'm ashamed to say that our trade has got so linked with sahucari," says Milmille in Yavatmal. This creditor-debtor equation lets the new sahucar do more than extort money from his clients. He can also sell them those inputs he wants them to use.

Today, lakhs of farmers use large quantities of inputs of very suspect quality - both legal and illegal. Despair has seen tens of thousands embrace Bt cotton as a magic bullet. Many of these own non-irrigated lands with little acreage to experiment on. So for a lot of them, it is a disaster waiting to happen.

The sale of non-Bt cotton seeds has fallen sharply, says Sunil Pawde, a dealer in Panderkauda. From about 15 lakh packets last year to five lakh this year. This means that both legal and non-royalty Bt cotton account for about a third of all sales. If the giant drama now underway ends in tragedy, the phrase "Chor Bt" could well be replaced by "Bt chor."

URL for this article
http://indiatogether.org/seeds-op-ed